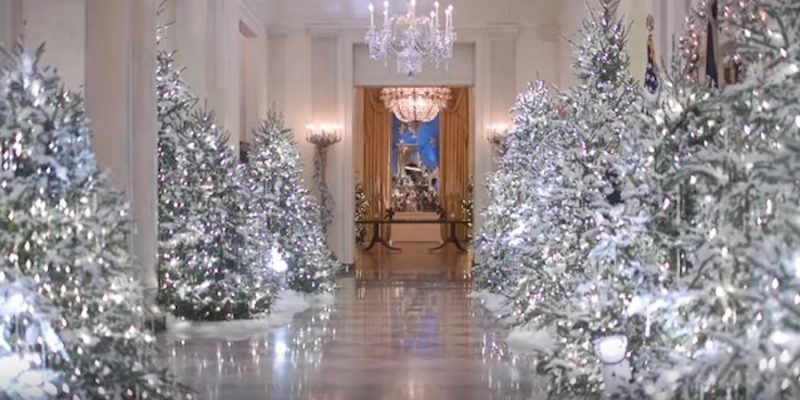 Decorations required an army of White House staff and more than 150 volunteers to wrap 180,000 feet of lights around 53 Christmas trees. The main Christmas tree was presented to the First Lady and her son Baron from Silent Night Evergreens of Endeavor, Wisconsin, which won the 2017 National Christmas Tree Association contest and presented its tree to the White House in a horse-drawn wagon.

Staff and volunteers hung more than 12,000 ornaments and placed 71 wreaths on the doors and windows of the presidential mansion. Pastry chefs cooked and decorated 31,000 Christmas cookies. They even built a 350-pound gingerbread replica of the White House adorned with candy.

After all of the staff’s hard work, the First Lady tweeted:

A special thank you to all the amazing volunteers who made this year's @WhiteHouse #Christmas decorations a success! https://t.co/K4jR5fNx2H

The White House hosted several Christmas parties, including one for children, and one for the media. The most recent party was attended by President Trump’s family, staff, and roughly 300 guests. The U.S. Marine Band played Christmas carols amidst appetizers and drinks, 53 decorated Christmas trees, a huge huge crèche with flying angels, and a gigantic gingerbread White House.

Keeping another campaign promise, Trump made sure that everyone was celebrating and exclaiming, “Merry Christmas!”