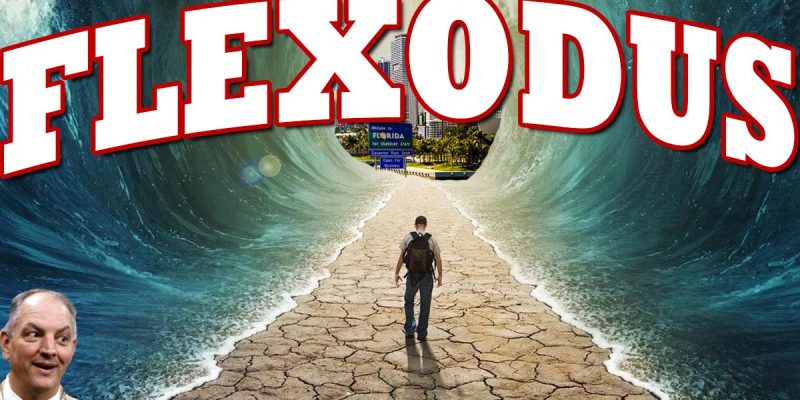 So here it is folks. I could not have made this stuff up. The Governor of Florida is coming to lure our job-creating businesses to Florida and you know what, a bunch will go. Let’s call it a Flexodus in the making.

We live in an economic La La Land where our governor pushes the exact opposite philosophy from that which would attract jobs. All the while and with a straight face he tells us that all we need is more taxes. He has not proposed even one idea to improve our economy, our education structure, our government – not one!

People please understand, business votes with its feet and goes where it can make and keep profits. It has already cleared out of New Orleans and gone to Houston and Dallas, there isn’t much left here. Now, Florida is swooping in to clean our bones of what remains.

Who do you think creates the jobs that will end poverty? Not the governor’s vision of a government utopia, that only leads to Venezuela! Do we want to be the laughing stock of the South forever?

I only hope that we can survive until we can get a leader who is willing to tackle the fundamental problems of Louisiana. Someone who understands that prosperity doesn’t come by happenstance, only by creating good paying jobs that can develop in an economically welcoming state can do that. Someone who the people can back and trust to lead them out of our hundred year old economic wilderness.

Governor Scott has made it clear that Florida is such a place and Louisiana is not. Einstein said that doing the same things over and over and expecting a different outcome is insanity. We must stop the Louisiana madness, or else between the ongoing Texodus and the Flexodus Scott is trying to bring about, there won’t even be anyone left to turn out the lights.

TALLAHASSEE, Fla. – Today, Governor Rick Scott announced he will be leading a domestic trade mission to Louisiana this week to convince more businesses to move to Florida. During the trade mission, Governor Scott will meet with Louisiana companies to share how Florida is making it easier for families and job creators to succeed and why they should consider moving their operations to Florida.

Governor Scott said, “While we are fighting to cut taxes and make it harder for politicians to raise taxes in Florida, Louisiana is doing the exact opposite. In fact, for nearly two years, Governor John Bel Edwards has been continuously working to raise taxes instead of reaching a long-term solution for their state’s financial crisis. Passing the buck to Louisiana families and business owners, who are already overburdened by high personal income and business taxes, is clearly not working. Louisiana’s unemployment rate is larger than the national average and their job growth rate is more than three times lower than Florida’s.

“Louisiana leaders should look to Florida to see how to achieve economic growth. Florida faced a $4 billion budget deficit when I became Governor in 2010, but over the past seven years, we have completely turned around Florida’s economy without raising taxes. With no income tax, a low business tax and a business-friendly environment, Florida is the perfect location for Louisiana business owners and families who want to keep more of their hard-earned money. I look forward to sharing this message during our domestic trade mission this week and ultimately welcoming more Louisiana job creators to Florida.”

Additional details on the trade mission will be announced in the coming days.”

And here was the response from our own governor…

“Rick Scott was Bobby Jindal’s biggest cheerleader and surrounds himself with the same set of advisors who turned Louisiana’s $1 billion budget surplus into a $3 billion budget deficit. We’re happy to have him visit Louisiana and see for himself all that Gov. Edwards has done to turn this state around – record low unemployment, higher wages, historic economic development announcements and stabilized funding for higher education. However, Gov. Scott should call this what it is – a fundraising stop on his yet-to-be announced U.S. Senate campaign. Louisianans would appreciate the honesty and hope that he’ll take his political contributions and leave.

“Instead of fundraising, we recommend he spend time with the first responders we willingly dispatched to Florida last hurricane season when his state needed assistance.”

Which one do you think would make people more confident in their state’s economic future? Behold the coming of the Flexodus.