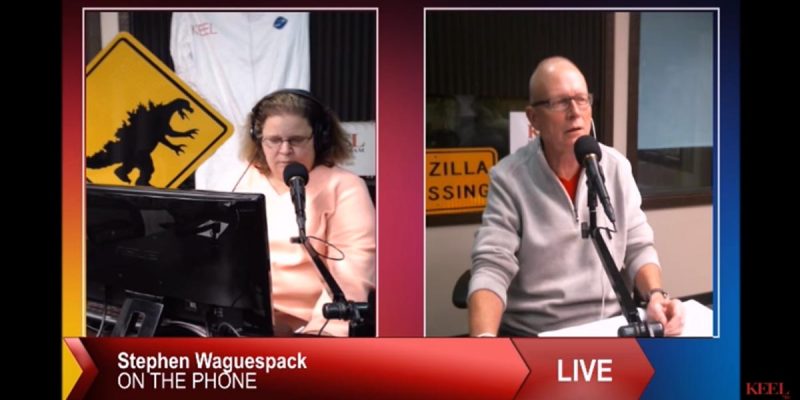 You can read our take on Gov. John Bel Edwards’ budget submitted to the Joint Legislative Committee on the Budget here, but this morning on KEEL Radio in Shreveport Louisiana Association of Business and Industry president Stephen Waguespack had a different take on Edwards’ presentation.

And Wags was even less charitable about it than we were.

Here’s the segment he did with Erin McCarty and Robert J. Wright this morning. It goes about seven minutes. We’ve got a summary and comment to follow…

In our analysis we focused on the fact Edwards’ budget takes aim at defunding some of the most powerful special interests in the state knowing that higher education and local law enforcement, for example, will descend like locusts on the state capitol and prevent legislators from sustaining the cuts he’s presenting in the budget and try to force those legislators into raising taxes to fill up the public-sector trough. Wags didn’t take that approach but comes to the same conclusion; namely, this isn’t an honest or serious document. He notes that throughout yesterday’s presentation the governor and his people continuously refused to stand behind their own budget proposal, to such an extent that at one point Edwards intimated that if the legislature actually passed this thing he’d veto it.

Wags then noted that for the last two years following the sales tax hike Edwards buffaloed the legislature into there was a promise made to reform the way Louisiana’s budget works, to take steps to minimize a fiscal cliff and the need for tax increases to balance the state’s fisc, and so on. We’re not sure anybody really believed any of that, but the representations were certainly made in that regard. Well, Waguespack says, now there’s no hiding it – Edwards took the money in 2016 and bided his time so he could take it again this year.

He also noted that the legislators ought to be furious at Edwards’ challenge that if the legislators don’t like his demands for tax increases they ought to present their own alternatives. That’s patently dishonest, Wags says, because Edwards’ own tax proposals – the ones he’s put forth as preferable alternatives to the extra penny of sales tax set to expire this year – don’t add up to the billion dollars he says he needs. And then he presents a budget full of cuts the governor doesn’t support and which are designed to scare people rather than balance the budget.

This, obviously, is not a good faith effort on Edwards’ part – and he makes it worse when, challenged by his critics to offer a responsible effort at fiscal responsibility, his response to them is to come up with their own plan.

As Wags notes, legislators aren’t full-time people in their jobs. They’re part-timers. We want citizen legislators in this state, and we don’t pay them enough money to justify the kind of time that would need to be spent poring over the state’s budget in order to come up with comprehensive reforms. Nor do we provide the kind of budget required to give those legislators lots of full-time staffers who can do that kind of budget analysis. So there is a manpower issue involved in asking the legislature to solve all the state’s problems.

There’s a structural issue, too – namely, that the state agencies whose budgets would need to be examined in preparation for cuts keep their fiscal information pretty close to the chest. So the kind of analysis that would need to be done even by the obsessive bean-counters in the legislature is made difficult by a lack of cooperation. If anybody is going to dig through that budget and find real savings, it has to be the governor.

In other words, Wags is saying, THAT’S HIS JOB. And by defiantly screeching that there are no cuts to be had in a $30 billion budget for a state with 4.6 million people in it, he’s refusing to do it.

Which is an embarrassment, and an outrage. But as Wags laments, Edwards will get nothing but positive notices in the newspapers around the state for his performance yesterday, along with a “Yessir, yessir, three bags full” endorsement of his tax hike proposals. And therefore the governor has no incentive to do much of anything else than he’s been doing.

Interested in more news from Louisiana? We've got you covered! See More Louisiana News
Previous Article The Washington Examiner Takes Aim At JBE’s Private Cabal Of Coastal Ambulance Chasers
Next Article Did You See How Much Money Louisiana Threw At Amazon In A Failed Bid To Land HQ2?