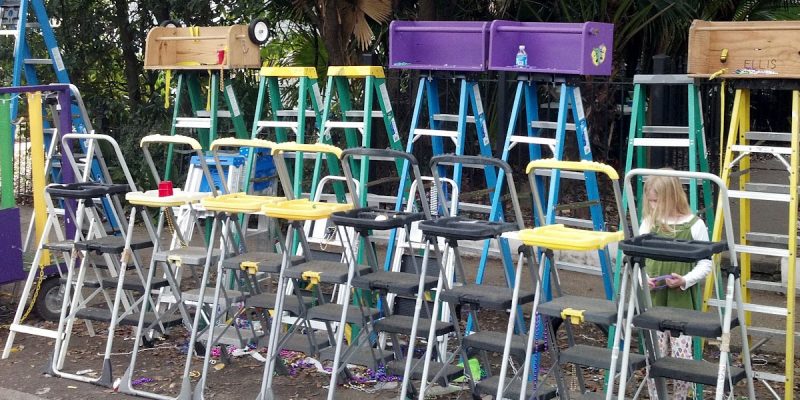 Mitch Landrieu stooped from stealing monuments to stealing Mardi Gras ladders. The city began removing and disposing of the naturally New Orleans ladders on Tuesday that were put out along the St. Charles parade route.

It is absurd that two weeks before Mardi Gras day people already lined the route with ladders and marked off space for tents. That is clearly out of hand.

Although the idea of keeping the neutral ground and sidewalks clear is good, naturally Mitch Landrieu went about it the wrong way. It would have been so simple to send a press release and put it on social media that ladders would be removed starting at 7 AM on Wednesday. Instead, New Orleans’ little dictator went out and snatched ’em.

Similarly to when he stole the monuments, Mitch used city employees without advance notice, and took that which was not his. This time he did it during daylight.

Ladder “sweeps” were going on around the city around the time Mitch felt that people should know.

“If you bring four or five ladders and you chain them all together, and you do it more than 24 hours before a parade, they’re going to get removed,” Landrieu said during a Tuesday press conference. “So conduct yourselves accordingly in that regard.”

Imagine a city-owned lot that looks like a dump with century-old monuments and colorful ladders with children’s names on them. But that is not the case, because the ladders will be “disposed of.”

Mitch brought up that as a father of five kids (that number is rumored debatable), he understands the plight of the little ones wishing to see above a parade-going crowd. But his family has said one of the secret Landrieu lots downtown was used for parade viewing, so maybe he knows the ladder struggles, maybe he doesn’t.

The latest blunder of Mitch Landrieu’s mayoral era has Mitch starring as the Grinch who stole Mardi Gras ladders.

Interested in more news from Louisiana? We've got you covered! See More Louisiana News
Previous Article How About The Wake-Up Call ExxonMobil Gave To JBE And Sharon Weston Broome Yesterday?
Next Article Hurricane Harvey Movie Begins Production but Is This a Good Thing?