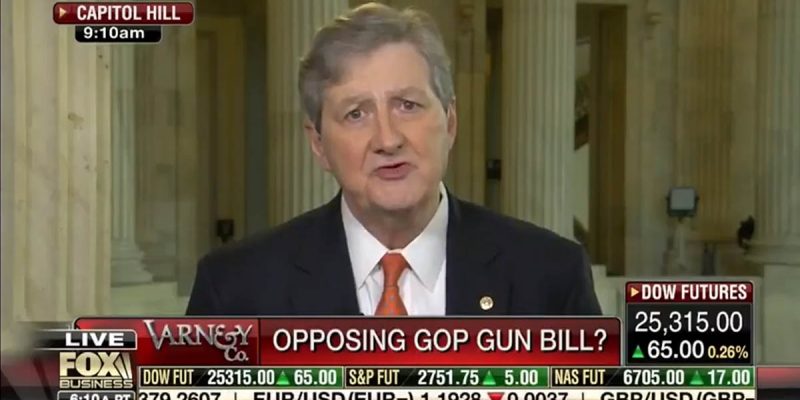 …at least that we’ve seen so far. Louisiana’s junior senator put on a bit of a show yesterday in response to the latest gun control bill to hit the Senate, and his quote about what America needs rather than gun control was a pretty good one.

From a press release put out by Kennedy’s staff yesterday…

WASHINGTON, D.C. – U.S. Sen. John Kennedy (R-La.) held a press conference today expressing his opposition to S.2135, the Fix National Instant Criminal Background Check System (NICS) Act.  Under this bill, federal agencies and states would be asked to do a better job of reporting criminal offenses and other information into the NICS database, designed to control who can purchase a gun.  The bill would threaten federal employees with loss of bonus pay for noncompliance and offer states greater access to federal grants in exchange for full compliance for following the law.

Sen. Kennedy joined his colleagues Sens. Mike Lee (R-UT) and Rand Paul (R-KY) in sending a letter to their colleagues in the Senate urging that there be vast improvements made to fix the NICS.  The full text of the letter can be viewed below.

“I support background checks.  What I don’t support is federal bureaucrats’ inability or unwillingness to do their job,” said Sen. Kennedy.  “We don’t need a law to try to get federal workers to do their jobs.  We shouldn’t be asking government workers to ‘pretty please with sugar on top, can you do your job?’  They already get an incentive for loading records into the National Instant Criminal Background Check System.  It’s called a paycheck.  If that’s not a good enough incentive, then they need to be fired.”

Then he went on Fox Business with Stuart Varney, whose show has essentially turned into Kennedy’s personal sounding board, and said this…

His opposition to more laws designed to beef up background checks, which is a way of furthering the gun control agenda by continuing to pass laws whittling away at Second Amendment rights in small measures with the knowledge that poor enforcement of current law can always be a vehicle for more restrictions, is correct on a couple of key political fronts.

First, people might argue about whether we have enough gun control. Almost nobody argues that the government is inefficient and incompetent. And the small-government crowd hasn’t done a good enough job of utilizing that consensus for its purposes since Ronald Reagan left the political stage. Kennedy captures some of that Reagan magic when he notes that nobody in the federal government ever gets fired for their gross incompetence, including the abject failure to process paperwork so accurate background checks of gun purchasers can be made, and as such it’s an injustice to continue attempting to pass more restrictive and expensive background check legislation that the incompetents in the federal government will then fail to enforce.

There is no good argument against what he’s saying. You can be the most vociferous leftist around and you can’t argue that if only we had more restrictive background check legislation it will solve the problem of government employees doing a bad job. At least, nobody will believe you if that’s your argument.

And of course there’s the reiteration of the need to protect Second Amendment rights, something the bill seems a bit of an affront to. This was the letter Kennedy, along with Paul and Lee, sent to the rest of the GOP Senate caucus…

Dear Republican Colleague:
We are writing regarding efforts to fix the National Instant Criminal Background Check System (NICS). We agree improvements need to be made to the system. Any legislative solution must ensure both completeness of records and basic due process protections.

We agree that individuals who are convicted of violent crimes in an Article III court or under the Uniform Code of Military Justice have been afforded constitutional due process. However, the continued use of administrative decision-making leaves non-violent individuals without the same due process protections afforded to violent criminals. And the solution contemplated by S. 2135—to leave nonviolent citizens to work their way through a Byzantine system of administrative appeal—is really no solution at all.

We are concerned that legislation currently under discussion in the Judiciary Committee falls short of ensuring these two necessities and may lead to the denial of constitutional rights without due process. As written, S. 2135 would require some veterans to be automatically reported to NICS. In addition, S. 2135 would allow the Social Security Administration (and other federal agencies) to revive Obama-era administrative regulations that required NICS reporting of seniors and other vulnerable populations dependent upon fiduciaries to manage their finances. Lastly, S. 2135 provides quantitative incentives to state and federal agencies, which might lead to an increase in the likelihood of abuse and administrative error. In short, we are concerned about S. 2135’s lack of robust due process protections.

Chairman Grassley penned a March 16, 2016 letter to then-Secretary of Veterans Affairs, Robert A. McDonald. There, Chairman Grassley forcefully stated, “…it is essential to ensure that the process by which the VA reports names to the Department of Justice (DOJ) for placement on the NICS list recognizes and protects the fundamental nature of veterans’ rights under the Second Amendment.” Consistent with that view, we believe a more reasonable solution to the existing problems with NICS would be to ensure that due process protections are afforded to individuals prior to NICS reporting. S. 2135 could be improved by simply including due process protections before an individual is included on NICS.

In February of this year, the House and Senate passed H.J.Res. 40. This measure overturned a rule submitted by the Social Security Administration relating to the NICS Improvement Amendments Act of 2007. During debate of H.J.Res. 40, supporters agreed due process must be provided before the denial of an individual’s constitutional rights, not after. It is our view that passing S. 2135 as written would undermine this earlier vote and would encourage future administrative agencies to encroach upon constitutionally guaranteed rights without affording robust due process protections.

If Republican Leadership wishes to move forward, S. 2135 will need to be amended to include and reaffirm due process rights in an Article III Court prior to any denial of Second Amendment rights.

The gist is that this bill would scrape away the due process of seniors and veterans without any particular reason to think you’re going to stop the next Sutherland Springs – after all, that massacre happened because incompetent government officials didn’t enter vital information into the NCIS system in time to stop the shooter from buying a rifle.

If you want to wax conspiratorial, you could say – as Kennedy does not, though it wouldn’t be shocking if one day he did come out and say this – that the gun-grabbers know the federal employees will do a lousy job of managing the information in those background checks and are happy about it, since a properly-working system for vetting gun purchasers will catch the small numbers of buyers who present a danger to the population without inconveniencing everyone else and that would make gun-control a dead issue. A dead issue does nobody any good who’s trying to make fundamental changes to how Americans live our lives.

That, by the way, applies to lots more issues than just gun control.