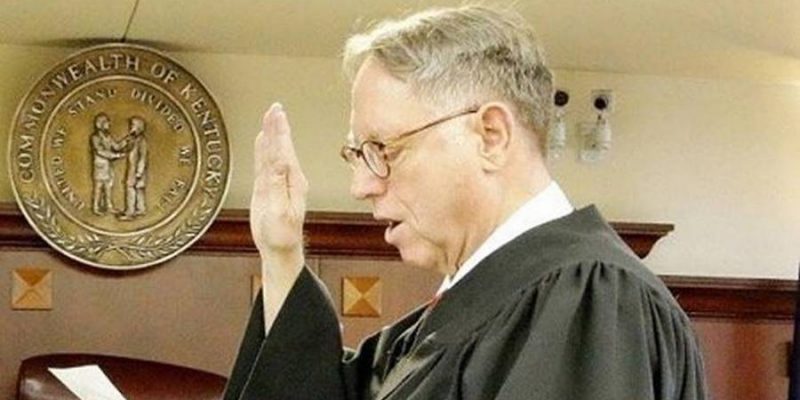 Same-sex marriage has far reaching consequences besides bashing florists, bakers, and photographers who, because of their Christian faith and belief about marriage chose not to participate in homosexual and lesbian weddings. Who can forget the Kentuckian Rowan County Clerk, Kim Davis, who wouldn’t issue marriage licenses to same-sex couples because of her new-found faith. Davis was briefly jailed. (After Matt Bevin was elected, the General Assembly removed the name of clerks from the licenses, eliminating the requirement for specific clerks to issue marriage licenses.)

This time, the “gay mafia” assault on Christian public servants has reached the judicial bench. A family court judge who sits in Barren and Metcalfe counties was forced to retire over his biblical beliefs about marriage and adoption.

Judge W. Mitchell Nance believes marriage is between one woman and one man, and that allowing gays and lesbians to adopt is not in the best interest of the child. Nance found himself in a quandary as a Christian ruling on family law.

Kentucky state law permits same-sex couple adoption and the U.S. Supreme Court ruled on legalizing same-sex marriage in 2015. As a Christian, how is is supposed to rule on gays adopting, which violates his conscience? He decided to use a judicial ethics rule that requires judges to disqualify themselves when they hold “a personal bias or prejudice.” (Technically, this would require all judges to do so because everyone holds biases.)

In April, Nance announced that he would recuse himself from hearing adoption cases involving gays and lesbians, even though he did not know of any gay adoptive parents or cases coming before the bench. He sent his decision to all of the attorneys practicing in his counties, instructing them to request a special judge if they have a same-sex adoption case.

Nance announced, that “as a matter of conscience” he believes that “under no circumstance” would “the best interest of the child be promoted by the adoption by a practicing homosexual.”

The state’s Judicial Conduct Commission was quick to launch an ethics and misconduct inquiry. The commission notified Nance that it was charging him “with multiple violations of judicial ethics rules, including those banning bias or prejudice based on sexual orientation.” The formal proceedings could have led to private or public sanctions, including removal from office.

Nance’s attorneys, Bryan Beauman and Scott Miller of Lexington, replied to the commission that same-sex adoptions presented a “unique crisis of conscience” for Nance, who has a “sincerely held religious belief that the divinely created order of nature is that each human being has a male parent and a female parent.”

But the handwriting was on the wall. Shortly after the commission’s inquiry began Nance submitted a letter of resignation to Gov. Matt Bevin announcing his retirement, with his last day in office being Dec. 16, 2017.

Legal professors and judicial commentators were quick to note that if Nance couldn’t fulfill his oath to uphold the law he should resign. One such professor from Indiana University Law School, Charles Geyh, told the Courier-Journal: “He has taken an oath to uphold the law, which by virtue of the equal protection clause does not tolerate discrimination on the basis of race, religion or sexual orientation. If he is unable to set his personal views aside and uphold the law — not just in an isolated case, but with respect to an entire class of litigant because he finds them odious — it leads me to wonder whether he is able to honor his oath.”

The bottom line is if this judge can’t fulfill his duties because of his personal biases, he should resign. It’s obviously better that the judge recuse himself from these cases rather than potentially wreck the lives of children who desperately need loving, adoptive parents. But it’s disturbing that this judge would cast aside everything we know about adoptions by same-sex couples to reach the patently false conclusion that such adoptions are not in the best interests of a child.

In the wake of receiving harsh criticism, Nance told the Courier-Journal, “I stand behind the law I have cited, the matter of conscience I addressed and the decision I have made.”

Those who supported Kim Davis and the state’s majority of voters who voted for a constitutional amendment to ban same-sex marriage in Kentucky, stated their support of Nance.

Mat Staver, founder and chairman of the Liberty Counsel, which represented Kim Davis, said “a judge has the right to ‘opt out’ of any case affected by strongly held beliefs or associations.”

Likewise, Martin Cothran, an analyst at the Family Foundation of Kentucky, said,

Nance received his undergraduate degree from Harvard University and his law degree from the University of Louisville. He was re-elected without opposition in 2014 and would have served another eight-year term, expiring Jan. 1, 2023, had he not resigned.

Interested in more national news? We've got you covered! See More National News
Previous Article HARTMAN: Second Chances Are Great. How Many Does Cantrell Get?
Next Article COURRÈGES: Is LaToya Cantrell Signalling Corruption, or Merely Ineptitude?