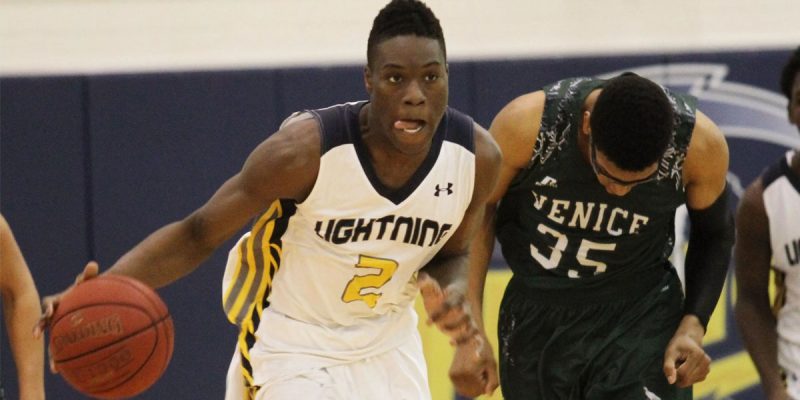 By now anybody who’s interested in the subject matter has heard that on Friday, LSU’s basketball program and head coach Will Wade took a commitment from 6-7, 215-pound five-star recruit Emmitt Williams of Oak Ridge High School in Orlando, Florida. This is obviously – obviously, if you’ve paid attention to Williams’ recruitment – a very, very big deal, and coming on the heels of the three monster recruiting victories notched for the November signing period (6-9, 240-pound post player Naz Reid of Roselle Catholic High in Roselle, New Jersey, 6-4, 190-pound point guard Javonte Smart of Scotlandville High School in Baton Rouge and 6-7, 220-pound forward Derrius Days of IMG Academy in Bradenton, Florida) Williams’ commitment means Will Wade will no longer send a roster onto the basketball court short of athleticism or talent like this year’s team has at times.

Like for example during yesterday’s ugly 95-70 beatdown at the hands of SEC leader Auburn, during which LSU fell badly behind early and was put away well before halftime in a game they weren’t even competitive in – things were so bad that while giving up a 14-32 number from the 3-point line LSU also managed to lose the rebounding battle 38-24, just a few days after being outrebounded 50-30 in a comfortable victory at home Wednesday night against Texas A&M.

Auburn’s three-point bombers notwithstanding, the worst deficiency of the current LSU team, which is currently 12-8 and 3-5 in SEC play with a challenging schedule ahead (LSU’s next three games are at No. 22 Tennessee, home against an Arkansas team rated No. 21 in ESPN’s RPI as of Sunday, and away against No. 20 Florida), is the almost total inability to hold its own on the glass. For fans investing in the efforts Wade is making to keep LSU competitive in his first year after inheriting a team which went 10-21 and 2-16 in the SEC, the nightly carnage on the boards is tough to watch.

And it’s clear Wade doesn’t want to watch it, either. Of the four scholarships he’s shaking loose this year with the graduation of forwards Duop Reath, Aaron Epps and Jeremy Combs and guard Randy Onwuasor, three of them are now accounted for with Reid, Williams and Days, who are without any possible question REBOUNDERS.

Those numbers represent defensive rebounding percentages – namely, the percent of available rebounds from shots taken by opposing teams the player brought in when he was on the court.

Needless to say with Williams, Reid and Days LSU isn’t going to suffer on the boards anymore. The trio doesn’t have the height of Reath and Epps, who both stand 6-10, but an objective analysis of the current post duo indicates that in both cases the height is greatly negated by a painful lack of mobility and foot speed which prevents both players from effectively getting into position to get rebounds. With this recruiting class hitting campus next year that’s no longer a problem; Williams and Days might be only 6-7, but both are so much more athletic than Reath and Epps there’s really no comparison when it comes to play in the paint.

In fact, it’s well worth noting that Williams is exactly the player LSU so badly needed this year. He’s a dunker, a rebounder, an enforcer in the lane and a slasher to the basket who can create a shot with determination, physicality and quickness – LSU doesn’t have anybody who even compares to him.

If you search YouTube for footage on Williams, you’ll find no shortage of it – he’s anything but underrepresented with respect to highlights. Here’s a pretty good sampling, though – most of his highlight films look pretty much identical to this one…

So the question following Friday morning’s news on Williams, discussed as it was on Sports Today with Charles Hanagriff and Jimmy Ott, was whether LSU had ever taken a recruiting class as decorated as this one.

The answer, as best we can tell, is no.

LSU is currently rated #3 in the nation by 247 Sports, close behind Oregon and a bit of distance behind Duke, whose class contains by some measure the top three players in the country. That appears to be the top-rated class in LSU history, or at least modern history.

The 2015 recruiting class, which contained national top-rated player Ben Simmons, was ranked No. 10 by 247 Sports, while the 2013 class which was headlined by Jordan Mickey and Jerell Martin and also had future NBA player Tim Quarterman was rated No. 6. In recent years those are the only two recruiting classes which can come close to measuring up to this one; any real comparisons would have to go all the way back to the 1988 class which had Stanley Roberts, Chris Jackson, Maurice Williamson and Harold Boudreaux in it; of course, that class was something of a disappointment in that Roberts, Williamson and Boudreaux, along with two other signees, failed to qualify as freshmen and only Jackson was able to play on the 1988-89 LSU team which lost to UTEP in the NCAA Tournament first round.

The long and short of it is this is an unprecedented amount of recruiting success in basketball. It’s another example of how Wade is putting LSU’s program – rapidly – on the basketball map.

This year’s team, despite some debilitating personnel limitations, has been in every SEC game prior to running into the buzzsaw at Auburn and is still in contention for a potential NIT bid (there’s a lot of work to do before the NCAA bubble is attainable). But next year could see a breakout for the program.

Change out Reath for Reid, and you’re giving up a legitimate low-post scorer who plays almost no meaningful defense and simply can’t rebound (he’s averaging 5.6 boards in 25 minutes per game, which for a 6-10 player is puzzling) for a one-and-done player who’s drawn repeated comparisons to Chris Webber, and for good reason.

Change out Epps for Williams and you might be losing three inches of height and some outside shooting, but the athleticism and physicality you gain is night-and-day. It ought to be said that Williams isn’t a bad outside shooter; he’s just not that frequent an outside shooter because he can take almost any defender to the basket for an old-fashioned three point play. And the defense Williams plays in comparison to Epps is, well…it’s considerably better.

And you’re changing out Combs, who isn’t even on LSU’s team anymore thanks to a bum ankle which flared up two years ago when he was an all-conference player at North Texas and never did heal properly, for Days – which is literally nothing for something. And Days, who fits the prototype of the “stretch” power forward Wade wants to get from the position, is a sensational college prospect if perhaps not quite an NBA lottery pick like Reid might be or the potential one-and-done Williams might be (though the consensus seems to be that Williams and Smart are likely two-year players before the NBA Draft will call). He’s likely a role player at forward as a freshman far above anything on the current roster.

Then there’s Onwuasor, who’s been playing quite a bit better of late but only averages 4.9 points per game for the season, who you change out for Smart, and that’s a considerable upgrade. Smart, after all, dropped in 48 points against Trinity Christian of Cedar Hill, Texas and 6-8 junior Tyreek Smith (who has an offer from LSU for 2019) over the weekend; that came following a 43-point explosion against Central High of Baton Rouge the previous night. Smart is the best player to come out of the Baton Rouge area in a decade or more and he’s probably underrated at #35, #29 and #32; he can do pretty much everything you’d ask a guard to do, and Wade is putting him into a backcourt which already has Tremont Waters along with Skylar Mays, Brandon Sampson, Darryl Edwards and Brandon Rachal for next year. Very few teams in America will be able to handle those guards, and then with some athletic and physical bigs to go with them things could get very interesting.

But that’s not all. LSU continues to recruit arguably the top JUCO big man in the country in 6-11, 230-pound Yuat Alok of Chipola JC in Florida – where Tiger assistant coach Greg Heier used to be the head coach. Alok, who like Reath and current freshman reserve Mayan Kiir hails originally from South Sudan, is currently averaging 12.4 points, 6.9 rebounds and 1.6 blocks per game on a loaded 15-4 Chipola team. There isn’t currently a spot for Alok on next year’s LSU team, but there’s a decent chance one might open up over the offseason.

And that’s not counting 6-11, 235-pound senior Kavell Bigby-Williams, who’s sitting out this season after transferring from Oregon, where he played on a Final Four team last year. Bigby-Williams, a former national JC player of the year, is the best post player on LSU’s practice court this year; there are people who attribute Reath’s improvement as a low-post scorer to having to go against Bigby-Williams in practice every day. Next year his athleticism and physicality will be on display alongside Reid (and maybe Williams) on LSU’s front line.

The point being, this season’s struggles look like a mere blip on the screen compared to what Wade has coming. LSU Basketball is about to get really, really good.

So LSU fans looking for something to support might consider getting in a little early on Wade’s bandwagon. It’s a worthy investment to make in a program ready to blossom.