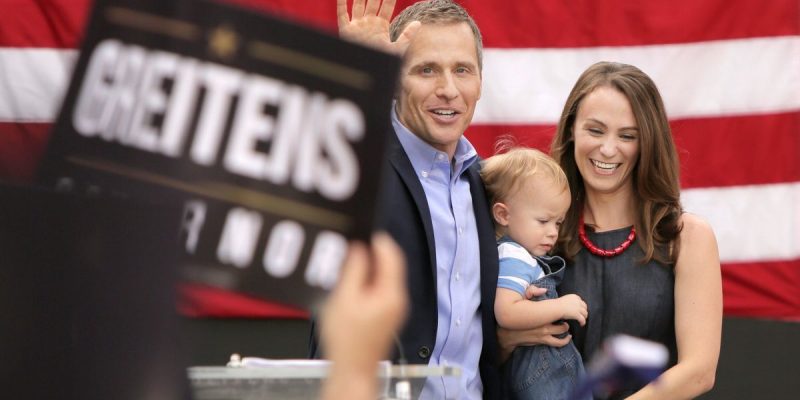 Before Eric Greitens became Missouri’s governor in 2015 he had an extra-marital affair with his hairdresser. This week was the first time the governor publicly acknowledged the affair after rumors of blackmail and violence surfaced (which denies), and leaders in both parties called for him to step down.

The mistake that I made was that I was engaged in a consensual relationship with a woman who was not my wife. That is a mistake for which I am very sorry.

The affair with his former hairdresser lasted for several months in early 2015, after which he reconciled with his wife before he announced his candidacy for governor in September. He battled through an expensive GOP primary, defeated the state’s attorney general, Democrat Chris Koster, and won the governorship, the first for a Republican in eight years.

After his inaugural address on January 10, 2018, St. Louis KMOV brought the affair to light. It played an audio recording of a conversation between the woman with whom Greitens had the affair and her then-now-ex-husband. In it she recounts that she and Greitens had sex in his St. Louis home, which included him tying her hands and blindfolding her. He allegedly photographed her while she was partially nude and also warned her to stay silent. Unbeknownst to the woman, her husband at the time secretly recorded this conversation.

Based on the recording and claims of violence and blackmail made by the ex-husband, St. Louis Circuit Attorney Kim Gardner announced that she was opening a criminal investigation. Greitens told KMOV that he was certain he would be cleared by the investigation and that the claims of blackmail and violence were false.

When Greitens was asked on Saturday if he had ever slapped this woman, Greitens replied, “Absolutely not.” At the time of the interview Greitens said he hadn’t been contacted by the circuit attorney’s office. He also made clear that neither he nor his attorneys had been contacted by the FBI “on this or any other matter,” after hearing of a CNN report that stated the FBI had opened an inquiry into Greitens.

Greitens, a former Navy SEAL officer and Rhodes Scholar, told the AP that he has no plans to resign. However, he did postpone his planned statewide promotional tour of what he described as, “the boldest state tax reform in America.” Instead, Greitens called nearly every state lawmaker and posted an apology on Facebook. He told the AP that the response he’s received has been overwhelming, saying: the “love and support has been tremendous from people all over the state.”

Greitens is the author of Resilience, Hard Won Wisdom for Living a Better Life, a compilation of letters he wrote to a former Navy SEAL friend who was struggling with life after military service.

He also founded the nonprofit, The Mission Continues, to help veterans adjust to life after serving in the military. During the campaign for governor Greitens was accused of taking money from the charity.

Of this most recent ordeal, Greitens remarked:

Interested in more national news? We've got you covered! See More National News
Previous Article Looks Like Together Baton Rouge Has Created A Competitor For Itself
Next Article How Obnoxious Was The Louisiana Democrat Party’s Attack On Ralph Abraham Yesterday?