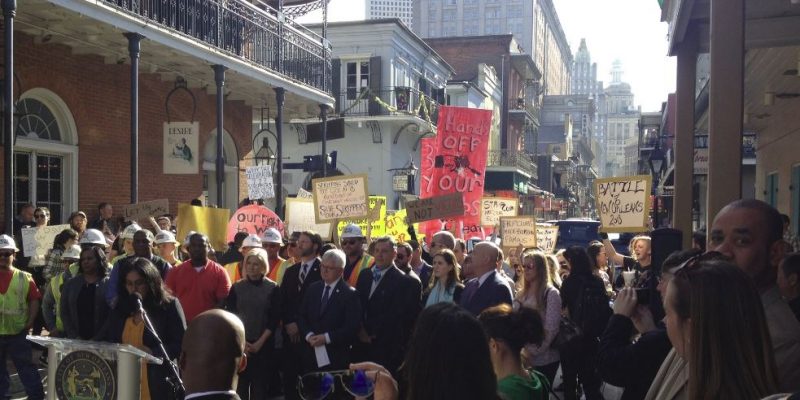 Who could have seen this coming?

First, the City of New Orleans, in a joint operation with the Louisiana Office of Alcohol and Tobacco Control, shuts down nine French Quarter strip clubs, thereby putting hundreds of people out of work.  The crackdown is widely viewed as pretextual — the raids were supposed to target human trafficking, and no evidence of human trafficking was actually uncovered.

Next, just a week later, the city decides to hold a self-congratulatory press conference to celebrate the repaving of Bourbon Street.   The project is widely regarded as an embarrassment, having blown through deadlines and vastly exceeded its budget.  Bear in mind, this occurs as all those out-of-work exotic dancers, doormen, bartenders, etc., now have plenty of time on their hands.

A press conference intended to detail Bourbon Street’s progress was hijacked Wednesday afternoon, instead becoming a loud referendum on the recent crackdown at area clubs.

Dozens of strip club workers began chanting “save our jobs,” along with other slogans, easily drowning out the words of officials attempting to speak. Dani Galloway, the interim director of Public Works, can be seen in videos trying to speak over the loud chants.

Speakers had intended to discuss the completion of months-long construction taking place on the first four blocks of Bourbon Street.

Gambit’s article on the protest offered additional photographs and went into further detail.  Many protesters specifically complained about the perceived “Disneyfication” of the French Quarter, something I have addressed before.

My personal favorite protest sign read: “There’s still no police to protect me when I walk to my car after work (You know, pimps & murderers at 4am) but hey, Bourbon is repaved (some).” That’s exactly the issue here; the city is patting itself on the back over a piddly four-block repaving project that cost double its original budget and took several months to complete (in other words, a complete debacle).  To top it off, it’s doing so right after putting hundreds of people out of work.