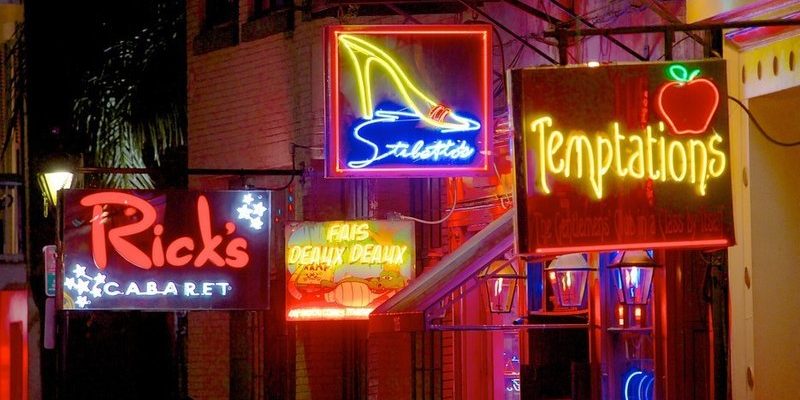 Last night, shortly after I posted my previous piece regarding the ongoing crackdown on strip clubs in the French Quarter that had shuttered five business, I began hearing reports that the task force was conducting more raids and had closed additional clubs.

This morning, the Times-Picayune confirmed those reports:

The clubs shut down on Thursday were Rick’s Cabaret, Larry Flynt’s Hustler Barely Legal, Stilettos and a male strip club, Hunk Oasis. None of the three clubs have a history of violations; Hunk Oasis opened last summer, replacing Deja Vu.

In addition to those eight clubs that have lost licenses under emergency suspensions, another club, Lipstixx, closed before the ATC raids started. That leaves five strip clubs operating with liquor licenses in the French Quarter: The Penthouse Club, Gentleman’s Quarters, Larry Flynt Hustler Club, Big Daddy’s and Kama Sutra Cabaret.

Before all of this began, there were 14 strip clubs in the French Quarter.  Now only five are left open.  That means that authorities have closed a whopping 64% of clubs in the Quarter.  There have been crackdowns in the past, certainly, but they have tended to focus on smaller clubs with major violations. The breadth of the current raids is entirely unprecedented.

Authorities are still refusing to give any reason for the emergency suspensions in advance of hearings, but it seems highly likely that they are either suspending alcohol permits for minor violations and/or invoking rules with zero warning that were not previously enforced.  It’s like an OSHA inspection at a work site; if the inspector comes out and wants the site shut down, he can find a reason.  The rules are so strict and arcane that a pretext can always be found to close the doors.

There are a lot of people in New Orleans that have crusaded against strip clubs, but in the end, the people with final authority over these raids are Governor Edwards and Mayor Landrieu.  Landrieu in particular wants to tame Bourbon Street a la Times Square, and he’s willing to ally himself with a grotesque assortment of prudes and control freaks to accomplish that goal.

Landrieu doesn’t care that he’s putting hundreds of people out of work right before Mardi Gras.  I’ve listened to some of them.  They’re frightened.  I understand that many people believe exotic dancing to be lewd and exploitative, but there are bouncers, cashiers, bartenders, waitresses, and yes, performers, who suddenly have no source of income.  That’s a lousy thing to drop in peoples’ laps during a season of celebration.  Landrieu may as well start going to birthday parties and whizzing on the cake.

Those affected aren’t sitting on their hands, though.  A protest march, “The Unemployment March,” is planned on Bourbon Street for February 2nd.  “These raids have left literally hundreds of people jobless, scrambling for money to feed themselves and families,” the event listing reads. “Our lives are not meant to be toyed with and used as pawns in a political game for money.” Indeed.

Interested in more news from Louisiana? We've got you covered! See More Louisiana News
Previous Article ERSPAMER: School choice helps Louisiana’s moms, dads, and students
Next Article Has LSU Basketball Ever Taken A Recruiting Class Like The One Will Wade Is Building?