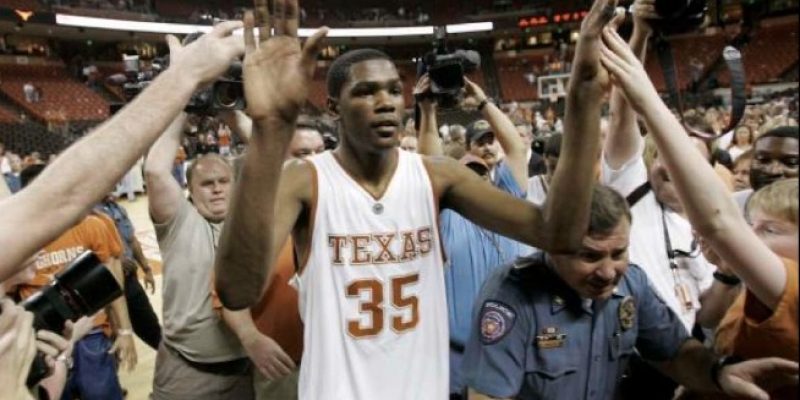 Golden State Warriors’ Kevin Durant and former University of Texas star, is donating $3 million to the Longhorns to support its basketball program and to the Center for Sports Leadership and Innovation (CSLi). It is the largest gift the university has received from a former Texas basketball player, and among the largest ever given by any professional athlete.

Durant, who won the 2007 consensus National Player of the Year award, said,

My time as a Longhorn helped build the foundation for who I am today as a player and a person, and the UT team will always be my family. It’s important to me to continue to give back to The University and ensure that future student-athletes have all the opportunities they need to succeed. It’s an honor to have such a close and unique relationship with Texas basketball, and I’m grateful to be able to contribute.

Durant designated $2.5 million to the Texas basketball program and the remainder to CSLi. CSLi was launched three years ago to “cultivate the character development, leadership skills and long-term welfare of athletes and coaches.” Its founding director is Daron K. Roberts, a former NFL and college coach. CSLi is the first university-based institute “dedicated to developing leadership and character curricula for high school and collegiate athletes.”

Kevin Durant is one of the greatest basketball players in the world, and he is also a Longhorn. As an NBA All-Star, as a gold medalist, as an NBA MVP and now, as an NBA champion, KD has always had a powerful connection to The University of Texas. I am grateful for his generosity and investment in the future of UT’s student-athletes.

Durant only played one season at Texas, and he was the first freshman to win any of the major National Player of the Year awards. He was the third freshman to be a consensus first-team All-American, following Oklahoma’s Wayman Tisdale in 1983 and LSU’s Chris Jackson in 1989.