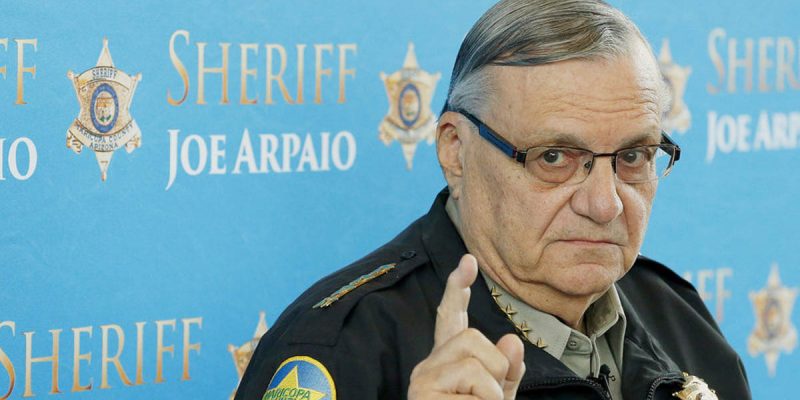 Republican Joe Arpaio, a close ally of President Trump and former sheriff known for his provocative approach to combatting illegal immigration, is running for Senate in Arizona.

The 85-year-old Arpaio could shake up the late August Republican primary in a critical open-seat race to replace retiring Sen. Jeff Flake, R-Ariz. Trump pardoned Arpaio last summer, sparing the former sheriff jail time after he was convicted of ignoring a federal court order in a racial-profiling case.

The polarizing yet iconic former Maricopa County sheriff, beloved by many conservatives for his hawkish immigration policies, presents an alternative to the unimpressive Kelli Ward and a potential obstacle to Rep. Martha McSally. She is expected to launch within days and is widely viewed as the Republicans’ strongest general election candidate.

In a telephone interview with the Washington Examiner, Arpaio shrugged off concerns about his age, dismissed Republican insiders’ anxiety that his poor reputation with nonwhite voters would put the seat in play for the Democrats in the midterm, and discussed plans to work with Trump on behalf of Arizona.

“I have a lot to offer. I’m a big supporter of President Trump,” Arpaio said. “I’m going to have to work hard; you don’t take anything for granted. But I would not being doing this if I thought that I could not win. I’m not here to get my name in the paper, I get that everyday, anyway.”

No, you should not be happy about Joe Arpaio running for the Senate.

Arpaio won’t win that race, he won’t help win other races, he’s too old to be in the Senate and he’ll eat up media coverage of better candidates.

This is a Roy Moore f-up on steroids. It’s the kind of thing the GOP should have learned not to do by now.

Martha McSally is a relatively moderate Republican House member. She had a 76 score on the American Conservative Union’s 2016 scorecard, the latest one published, along with a 64 from the Club For Growth and a 45 from the much tougher Conservative Review scorecard. It’s safe to say McSally is lacking in a conservative track record, just as it’s safe to say the RINO-friendly National Republican Senatorial Committee will surely shower her with cash.

You need an attractive conservative in the race against McSally. You don’t need Kelli Ward, who had John McCain dead to rights in 2016 and found a way to lose to him. And you sure don’t need an 85-year old Joe Arpaio who has been demonized for more than a decade as a racist, to bear that standard.

Don’t tell us there isn’t an intelligent, committed conservative in Arizona without Arpaio’s baggage who can run and win. Arpaio getting in that race makes it impossible for such an intelligent, committed Arizona conservative to gain suitable traction, and it makes Arizona’s Senate race a precise rerun of the Alabama special election in 2017, wherein the obvious proper Republican nominee Mo Brooks found himself sandwiched between an unsatisfactory establishment tool in Luther Strange and an unsatisfactory electoral loser in Moore.

Except at this point there is no Mo Brooks in Arizona, yet – and Arpaio’s entry makes it less likely there will be, so the GOP won’t even have a chance to learn from Alabama.

Would Arpaio be a better Senator than Jeff Flake? Sure – until he drops dead, which at 85 is a distinct possibility. But that’s not the issue. The issue is whether you can get the man elected. And in Arizona as it currently stands, you can’t. There was a time Arpaio was popular enough there that he could have won statewide, but that time has passed, and Arizona isn’t as red as it used to be – it was a swing state in the presidential election. You have to run somebody electable if you don’t want to lose the seat, and Arpaio isn’t.