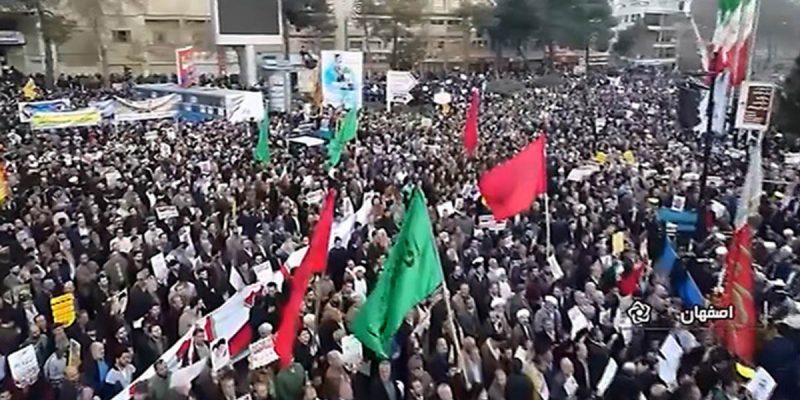 We have a couple of items on Iran, which has had daily protests bordering on riots since right after Christmas in cities all over the country. Both, which come courtesy of observers who have more than a passing knowledge of what makes Iran tick, indicate that unlike the 2009 Green Revolution, which never really got going thanks to the Obama administration’s failure to offer support to the protesters, the unrest which began in December 2017 is more deep-rooted and comprehensive and might just topple the tyrannical theocrats ruling that troubled outlaw nation.

Geographically, whereas the 2009 protests were mainly limited to Tehran, today’s phenomenon covers the whole country, from major cities to smaller towns and even rural villages. That’s significant, because those who do not believe in the prospects of an Iranian revolution invariably argue that opposition to the regime is restricted to the elites of the big cities, and that rural populations are pro-regime. It’s difficult to judge how many rural residents are protesting, but it’s a significant number. That’s new, and I believe it surprised both the regime and the leaders of the uprising

The demographic difference is class: the 2009 demonstrators were Tehrani bourgeoisie (bazaaris, for example). Today’s masses are proletarians: workers, unemployed, failing farmers and the like. Notice that trade unionists are being arrested in Tehran, because the tyrants fear they are the real organizers of the uprising, and because workers and the unemployed are not as easy to intimidate as professors and businessmen.

That’s something echoed in a Facebook post by John Ringo, an author who lived for a time in Iran…

Mashad is an interesting place for the protests to break out to the point of being Bizarre.

How to describe Mashad? Basically, it’s the Pittsburgh (or what Pittsburgh once was) of Iran. Something of a trade nexus, (it was part of the Silk Road but so were most of the cities in the region) it is the bluest of blue collar Iranian cities.

Which gets to why it’s so bizarre.

The mullahs came to power on the backs of the ‘blue collar’ of Iran. This is generally defined as the ‘rural poor’ and, yes, that’s true. But it’s more along the lines of ‘the deplorables.’ Any group which was generally lower economic and educational class as well as generally socially conservative. (The two tend to combine virtually everywhere and in all times.)

But the revolution did not start out as a blue-collar endeavor. The 1979 revolution was very much a socialist revolt, sponsored and paid for by the Soviet Union in an attempt to flip Iran to communist side on the Risk board.

The mullahs simply co-opted the revolution then hanged all the socialists who started it. They managed that by out-numbering them with the ‘blue-collar’ and ‘rural poor’. (‘Deplorables’ IOW.)

And they (the blue collar) were rewarded for it. Whereas the Shah had kept the oil wealth of Iran to himself or his coterie of sycophants, the Ayatollah Khomeini spread it out to the poor. Which was a good thing in general. The poverty of Iran under the Shah had to be seen to be believed. (See my short speech at LibertyCon on ‘Children in the Snow’.)

So Mashad, the bluest of blue collar cities, being the focus of the initial unrest gets… interesting. Isfahan, sure. It’s more the Berkeley of Iran. Tehran? Sure. It’s more the… well, DC/NYC of Iran. Both of those were at the center of the Green Revolution protests of 2009.

But Mashad? Most of the garbage collectors (ash kali) in Tehran were from Mashad in the day. This meant, to give some background, dumping your garbage into a hand-cart to walk it multiple miles to the dump. That’s an ash kali’s job. And the name actually derives from when they would pick up night soil prior to indoor plumbing. Probably 80-90% of the men in Mashad have a bump on their forehead from banging their head on a rock during salat. This is a serious, bed-rock, conservative city.

Ringo’s theory on the origins of the current unrest, coming as it does from the common man moreso than the bourgeoisie and intellectual ranks, as the 2009 uprising did, is that the Obama administration unwittingly set it off…

The price of oil is down. (Have you hugged a fracker lately?) So, there’s less money to be used to pay off the blue collar supporters. The absolute precession of these protests was a budget announcement that cut funds to the lower class. There were both cuts in the gas supplements as well as cuts in direct payments. (Teachers, doctors and nurses had already faced budget cuts and have essentially been working for free for months. Shades of late Soviet Union.) That, I don’t think, would cause them to revolt. The working class in Iran has a historical affiliation with extreme poverty. And along with the usual suspects (college students) the working class are continuing to protest.

We gave Iran a bucket ton-full of money. And people in Iran KNOW that. The Mullahs made a big thing about it.

Then, instead of doing good works in the country with it, what with the price of oil down and all, and teachers not getting paid and schools and hospitals getting their budgets cut, the mullahs, who were supposed to be all-in for the working poor, instead gave it all to some Arab goat-herds. (Hezbollah)

The security forces’ most vicious component is the Basij, whose famously vicious ranks are largely drawn from the same proletarian neighborhoods as the revolutionaries. The Basij, like the rest of their countrymen, are not happy with the state of the country. They, too, are worried about paychecks. They, too, are fed up with the state of their world. And they must be terribly ambivalent when they are told to send their families into the streets to stop the demonstrations. We have all seen scenes of security people defecting to the revolutionary cause, and the revolutionaries are playing it smart, offering the thugs security and a warm embrace if they switch sides. Who will prevail? Watch carefully for signs of large-scale defections from the Basij and their mother organization, the Revolutionary Guards. If that starts to happen, the regime’s days are in single digits.

It’s too early to predict that the uprising will turn into a full-scale revolution. The regime in Tehran is as bloodthirsty as any on the planet and they will not hesitate to kill mass numbers of the protesters to make it go away. The question is whether that will be enough, and whether the rest of the world will stand by and allow a rogue state like Iran to continue that kind of misbehavior against its own people.

Obama did everything he could to prop up the Iranian regime, thinking that somehow he could tame them. His acolytes boasted of their ability to bring the Democrat media on board with his project, and the remnants of that campaign are visible in how the recent uprising is being covered (or not being covered, as the case may be). But that policy is no longer extant with the Trump administration, which has given strong moral support to the protesters in a country whose people, despite the extreme hostility to America promoted by its ruling cabal, are quite fond of the USA.

These are very interesting times, indeed. If the uprising becomes a full-on revolution and takes down the mullahs, it would mark a significant inflection point in the fight against the global jihad.