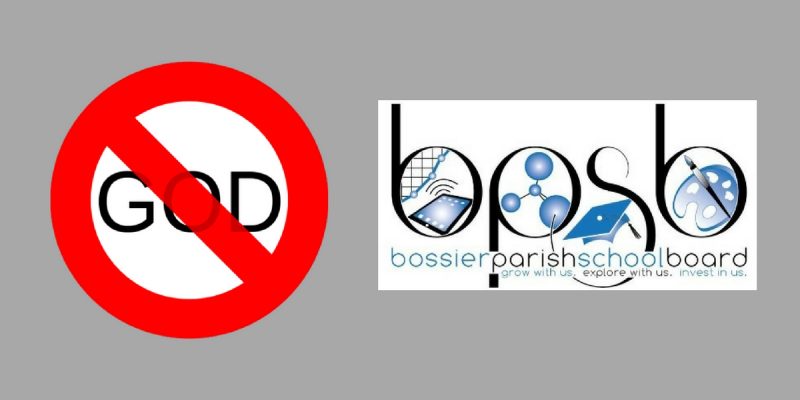 Americans United for Separation of Church and State (AU) recently filed a federal lawsuit against Bossier Parish, Louisiana, to stop the “widespread unconstitutional promotion of Christianity throughout” its school system.

AU and four Bossier Parish parents who are plaintiffs in the suit, obviously didn’t read the state’s report. Instead, they argue that the school board, school administrators, teachers and coaches all violated their children’s religious freedom.

Parents of all backgrounds should be able to put their trust in public schools to teach children reading and math – and to let families make their own decisions about faith.  Unfortunately, that is not the atmosphere that Bossier Parish Schools provide. … Bossier Parish school officials make one religion – Christianity – pervade all aspects of school life.

Americans United claims the school district has violated the students’ rights in school classrooms and offices, school-sponsored events, football games, graduations, and school-sponsored extracurricular clubs and athletic programs. It lists a long litany of places and events where Christianity has been promoted, including church meals, team devotionals, “Bring your Bible to School Day”, student-led prayers, the promotion of creationism, and the list goes on.

But the Bossier School District has not ended the graduation prayer practice.

Posted by Americans United for Separation of Church and State on Wednesday, February 7, 2018

Mat Staver, the founder of Liberty Counsel, said of the state’s report, “Students may exercise their constitutional rights to religious free speech while on public school campuses during non-instructional times. They do not give up those rights just because they are in a public school.”

Interested in more national news? We've got you covered! See More National News
Previous Article It Looks Like Opposing Coaches Will Wade Is Outworking Are Using Shill Reporters To Attack Him…
Next Article Which Republicans On The House Ways And Means Committee Want To Raise Your Taxes?