Another way to put it is, which Republicans on the House Ways And Means Committee don’t think there are any cuts to make in a $30 billion Louisiana state budget?

Well, here’s a graphic which supplies the names, and there are lots of them – because five tax increase bills came before the House Ways And Means Committee yesterday evening, and all five of them were passed on to the House floor… 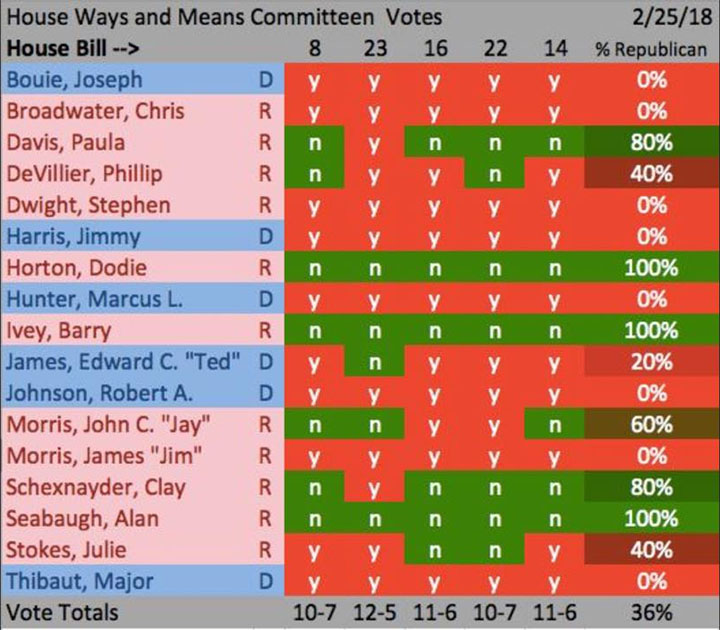 Chris Broadwater, Stephen Dwight and Jim Morris went full RINO last night. Jay Morris, Julie Stokes and Phillip Devillier went part RINO. So did Clay Schexnayder and Paula Davis, but only once in five votes. Mike Huval didn’t even show up, which probably makes him the smartest guy on the whole committee.

And a committee which has a 12-7 Republican majority couldn’t kill a single tax increase. They went 0-for-5 on fiscal conservatism with the whole state watching.

Our thanks to Alan Seabaugh, Dodie Horton and Barry Ivey, who actually fought for Louisiana’s taxpayers yesterday by voting to kill all the bills.

Seabaugh attached the same amendment to every one – namely, tying them all together so if any of them fails, they all do, and also including those conditions set for in House Speaker Taylor Barras’ letter to Gov. John Bel Edwards before the special session that no tax increase would be considered without – namely, implementation of the Louisiana Checkbook, a constitutional amendment altering the state expenditure cap and reforms to the state’s Medicaid program.

The Times-Picayune naturally called Seabaugh’s conditions a “watering down” of the tax bills. Naturally. 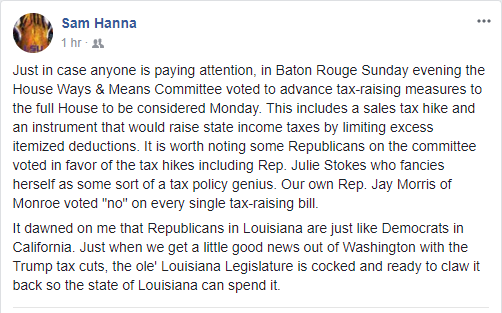 We’d love to report that none of these bills can make it past the House floor, and those among them which represent new taxes probably can’t get to 70 votes. The ones which need 53 votes, though, like Rep. Walt Leger’s bill changing tax treatment of excess itemized deductions and Leger’s bill raising taxes on business by diminishing tax breaks offered as economic development incentives, probably do pass.

And anything which gets to the RINO-infested Louisiana Senate, which is controlled by Edwards through his lickspittle John Alario, will get much, much worse when it’s amended and then sent back to the House.

So hold on to your wallets, folks. The rout is now on, and the conservatives are running for the hills.

Interested in more news from Louisiana? We've got you covered! See More Louisiana News
Previous Article Another Lawsuit Against Another Parish to Eradicate Christianity from Public Schools
Next Article APPEL: A Little Math Regarding Your Taxes In Louisiana