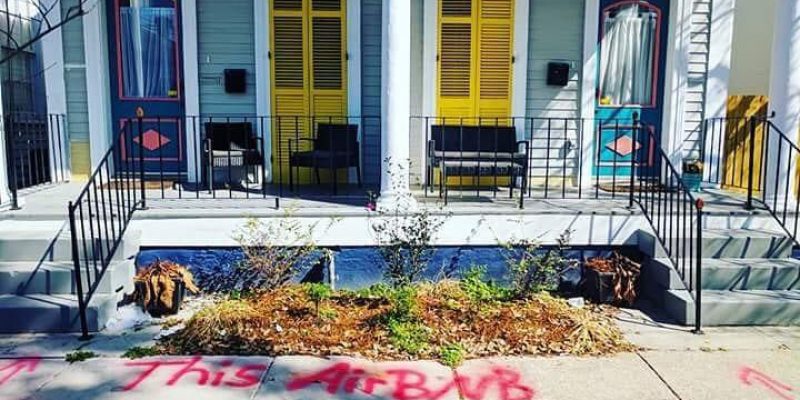 A photograph circulating around social media that went viral over the past couple of days.  It depicts a shotgun double home in New Orleans with “This Airbnb Displaced 5 People” emblazoned on the front sidewalk in red spray point.  Here’s the photo: 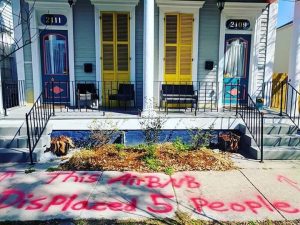 The property is purportedly located at 2111-2109 Josephine Street in Central City, several blocks away from my own house.

Details regarding what happened here are murky, but apparently the property depicted in the photograph was previously rented on both sides, but was recently purchased by an out-of-town real estate investor who renovated the property and turned both units into full-time Airbnb rentals.  An online listing confirms that the property sold for $207,000 in March of 2017.  The Parish Assessor’s website lists the current owner as a corporate entity, NOLA Touro St., L.L.C.

Now, I don’t support vandalism.  It’s unlawful and wrong to spray paint a public sidewalk.  However, assuming the basic facts being presented with the photograph are correct, I can understand the frustration that spawned an act like this.

The City of New Orleans has long restricted the development of new hotels, motels, hostels, and traditional bed and breakfasts — professional businesses for transient lodging — with restrictive zoning.  Height restrictions permeate the city, even in the central business district, and the French Quarter has a complete ban on new hotels that has been in place for decades.  As a consequence, the market has not been permitted to meet demand as tourism has continued to increase.

Upon its debut, Airbnb understandably began to fill the supply void that the city had created.  Real estate investors began buying up residential properties and renting them out on Airbnb to tourists and other visitors to the city, netting a far greater return than they could garner with traditional long-term residential leases.  The result has been to artificially increase rents as the unmet demand for tourist housing has eaten into the residential market.

I raised the issue of the city’s stubborn refusal to loosen zoning restricts for hotel development and how it feeds demand for Airbnb in a column back in 2014, and my view was even noted by the Times-Picayune.  However, the reforms that followed failed to address the problem.

Initially, Airbnb listings operated illegally in New Orleans, staying under the radar of code enforcement.  However, beginning in early 2017, the city imposed a licensing and registration scheme on so-called short-term rentals (STRs).  This scheme permits commercial STRs and those with a homestead exemption to be rented out without any time limitation, but only allows all other STRs to rented on a temporary basis to a maximum of 90 days per year.

A property such as the one depicted in the above photo currently making the rounds on social media could only receive a temporary STR permit with the 90-day limitation.  However, it is highly doubtful that it would be more profitable to rent out two apartments as Airbnbs for three months than it would be to lease it year round.  Nevertheless, it is very common to see these kinds of Airbnbs because the city simply doesn’t appear to be putting significant effort into enforcing the 90-day limitation, even when complaints are made, and so owners violate it with impunity.

Thus, the city has effectively legalized Airbnb across the board while maintaining tight restrictions on hotels and similar transient housing for tourists and visitors.  Obviously, this is terrible for renters, and the city doesn’t seem to care.  Worse, it may be partially by design.  Forcing low-income renters out in favor of Airbnbs could be viewed as a perverse way of improving the tax base.  Time and time again is does appear that the likes of Mayor Landrieu and his ilk actually want the cost of living to increase, especially for those on the margins.

When the government refuses to enforce its own laws, it often results in street justice.  Vandalism is certainly a regrettable but predictable result of the city’s tacit approval of Airbnb investment properties that vastly exceed the terms of their license.

I don’t condone it, but unfortunately, I do understand it.

Interested in more news from Louisiana? We've got you covered! See More Louisiana News
Previous Article UPDATED: The Joe Lopinto Coffeehouse Video Caper Is One Of The Weirdest Stories You’ll See This Year
Next Article There Is Absolutely No Reason Whatsoever To Believe JBE’s Claim The State Is Saving Money On Medicaid