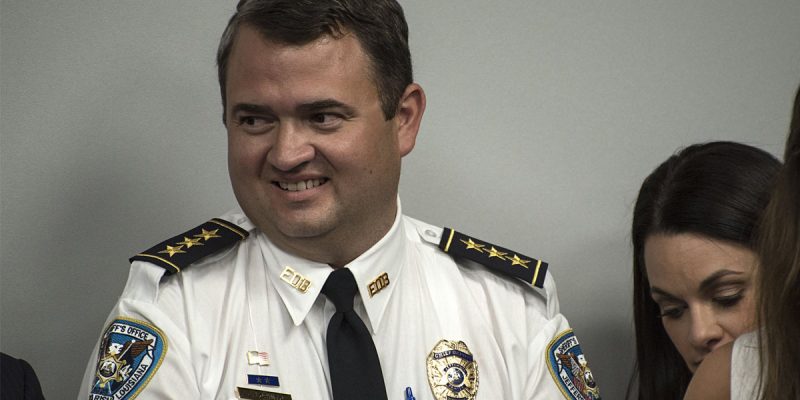 Joe Lopinto, Newell Normand’s hand-picked successor as Jefferson Parish Sheriff, doesn’t seem to have fallen too far from the tree – at least that’s an easy conclusion to reach amid the latest revelations that Lopinto has been attempting to spy on his electoral challenger John Fortunato.

A newly released internal probe says Jefferson Parish Sheriff Joe Lopinto asked one of his deputies to obtain surveillance footage of a coffeehouse meeting between Col. John Fortunato and two other retired lawmen — contradicting the sheriff’s repeated claims that the deputy obtained the footage of his own accord in a misguided attempt to assist Lopinto’s campaign.

Lopinto has insisted in recent weeks that he was not even aware of the existence of the video before the Sheriff’s Office late last year received a public-records request from a local television station requesting a copy of the video and any records relating to its collection.

But an internal affairs report received Tuesday by The New Orleans Advocate paints an entirely different picture of the coffeehouse controversy, a scandal that Lopinto has sought to blame on three deputies he said acted without his direction when they downloaded the video from the Elmwood P.J.’s.

The records show Lopinto and his chief deputy, Tim Scanlan, were the subjects of the internal investigation, even though the sheriff said three deputies involved in the collection of the video would receive “counseling.”

What’s going on here is that Fortunato, who before he retired last year to mount a campaign for the sheriff’s position was a colonel in the Jefferson Parish Sheriff’s Office, had met with two other JPSO retirees, Tom Gorman and John Thevenot at a coffeehouse in Elmwood, presumably to discuss the idea of running against Lopinto. Fortunato then mentioned the conversation to another JPSO deputy, Sgt. Rodney Naumann, which in retrospect he perhaps shouldn’t have done.

Because what came next was a fracas.

Naumann told the sheriff he witnessed the coffeehouse gathering three days earlier, having walked into the P.J.’s while he was off duty.

“Sheriff Lopinto requested a picture of the meeting,” Maj. William Boudreaux wrote in the report.

Naumann then told the sheriff he knew the owner of the cafe, Mike Pierce, and that he “could inquire if getting a photo was possible.”

Hours later, Lopinto told Scanlan, his chief deputy, that “he would like to have a copy of” the coffeehouse surveillance footage, the report says. “Based on this conversation, Chief Scanlan called Sgt. Naumann and asked if he could get it on one of his breaks.”

Naumann later took a coffee break and, with the owner’s permission, tried to make a copy of the surveillance tape from the cafe’s security camera. After struggling to copy the footage, he telephoned Scanlan, who asked another deputy, Detective Robert Miles, “if he would take an early lunch break and go and assist Naumann,” the report says.

Miles then asked his supervisor, Detective Steven Villere, to assist him in copying the video, the report says. Miles and Villere are assigned to the Sheriff’s Office’s digital forensics unit.

“Both detectives did volunteer to do a favor for their chief and take an early lunch,” the report says.

The deputies eventually copied the “video/photograph” of the meeting and placed it on a “non-departmental thumb drive,” the report says. That drive was later handed over to Scanlan, Lopinto’s chief deputy.

The report says Miles and Villere “were considered witnesses in this investigation,” even though Lopinto publicly said the deputies involved would receive “deficiency counseling” for their roles in obtaining the video.

The sheriff refused to release the names of any of the deputies, but they are identified in the internal affairs report, which the Sheriff’s Office released Tuesday in response to a public-records request.

Lopinto has since been attempting to throw his subordinates under the bus, sending out departmental memos warning that political activity in advance of the March 24 primary is verboten and cautioning everyone not to be overzealous in their efforts to keep him in office.

And he’s called this fiasco a “non-story.”

Of course, it’s not a non-story. If anything, it’s reminiscent of another coffeehouse spying story involving Lopinto’s predecessor – who sent half the sheriff’s department out to hunt down a private investigator hired by David Vitter’s gubernatorial campaign to find out what was said when Normand was meeting with John Bel Edwards backer John Cummings by using the “record” app on his cell phone in a public space. Normand sent out a posse to arrest the private investigator and confiscate the recording, which was a fairly bright-line civil rights violation, but naturally the local media reported the story as “Evil Vitter Spies On Local Sheriff.”

This time it’s the same abuse of power, with the additional spice of using the color of law to obtain the opposition research.

The Lopinto-Fortunato race will be a fascinating one. If Lopinto loses, coming on the heels of last year’s Jefferson Parish Council race in which his former law partner and fellow state legislator Danny Martiny was waxed by Dominic Impastato, it could signal that the Normand political machine in Jefferson Parish has had its day.

But it’s far too soon to make that judgement. In the meantime we’ll just note that the JPSO certainly seems to need some new leadership and fresh blood.

UPDATE: And here’s a press release by Fortunato, who says he would have fired Lopinto for lying if the latter was his employee…

Former Jefferson Parish Sheriff’s Colonel John Fortunato, a candidate for sheriff, issued harsh words today against his opponent, calling Sheriff Joe Lopinto “a deceitful politician who will lie to the public for his own personal gain.”

Fortunato’s statements against Lopinto came after The New Orleans Advocate obtained a Sheriff’s Office internal affairs report proving that Lopinto was complicit in an attempt to surveil Fortunato and two former high-ranking JPSO officials who were meeting at an Elmwood coffee house on the eve of Fortunato’s announcement of his campaign for sheriff.  The report, as written by the Advocate, clearly shows that “Lopinto asked one of his deputies to obtain surveillance footage of a coffeehouse meeting between Col. John Fortunato and two other retired lawmen.”  That report directly disproves Lopinto’s consistent claims that he knew nothing about the attempt to gather video of Fortunato’s meeting with former chief deputies Walter “Tom” Gorman and John Thevenot.

Said Fortunato, “If I were the sheriff, I would have fired someone like Joe Lopinto on the spot for lying to the public.  Sheriff is, by its nature, meant to be a position directed by truthfulness, fairness and accuracy.  The mission of the JPSO is for ‘everyone to be committed to integrity.’  When a sheriff lies for his own political gain that undermines the integrity of the position and the department.  Where is the integrity in lying to the public, lying to the media and lying to endorsement groups just to win their support?  Joe Lopinto is nothing more than another deceptive politician who hasn’t earned his badge or the people’s trust.”

It was reported by media that Lopinto stated, “… if one of my employees went over there trying to help my campaign, they shouldn’t have gone. I expect more from my deputies. I expect them to know better.”  He then issued a department memo under his name reminding JPSO members that “political activities are forbidden during an employee’s tour of duty.”

Said Fortunato, “The hypocrisy of Joe Lopinto is epic.  He threw his own deputies under the bus, lied to the public and media, issued a memo to try to cover his tracks, and now calls it all a “non-issue” because he was caught in the act of being deceptive, irresponsible, and reckless.  He’s not fit to lead 1500 men and women in a fight for justice.”