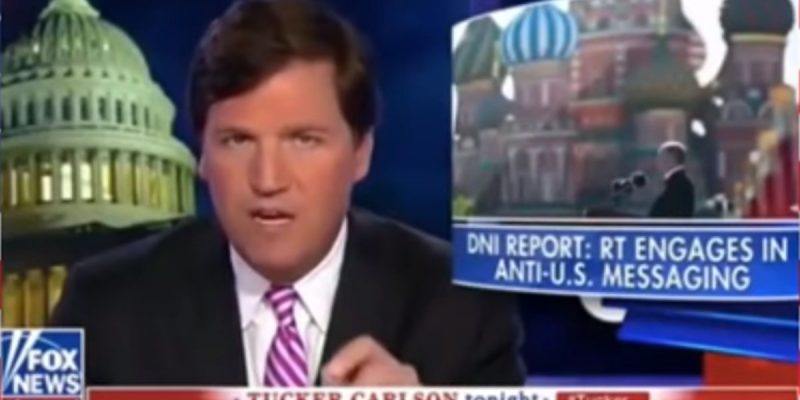 This was vintage Carlson, doing his best to blow open the idiocy of Democrat congressman Adam Schiff, the son-in-law of billionaire leftist financier George Soros who has become that party’s front man in pushing the unraveling Trump-Russia collusion meme. You’ve got to see it to fully appreciate how well done this takedown is…

Schiff’s statement that the Russians are subverting America by touting the Second Amendment as a means of inducing Americans to kill each other might be the stupidest thing said by a member of Congress since Schiff’s fellow Democrat Hank Johnson fretted about tipping over the island of Guam if too many military personnel were stationed there.

But Schiff topped that by getting himself trolled by a pair of Russian comedians who purported to have nude photos of Donald Trump with a Russian model, the obtaining of which as Carlson notes would be treason according to Schiff’s definition.

We’re now finding out that the source of at least some of the allegations in the Steele dossier without which the FBI wouldn’t have sought a FISA warrant to surveil Trump campaign advisor Carter Page was none other than Clinton political hatchet man Sidney Blumenthal, which is a sizable revelation.

Essentially, what’s becoming the story here is this: Blumenthal cooked up at least some of the “salacious and unverified” material that went into the Steele dossier, and fed it to Cody Shearer, a Clinton campaign associate who produced the first dossier alleging Trump was compromised by Putin. That dossier was sent to the Obama Justice Department, and the FBI applied for a FISA warrant to surveil members of the Trump campaign.

That first FISA warrant was turned down.

Then that information was fed to Christopher Steele, who was then retained by Hillary Clinton and the DNC through Fusion GPS at $168,000 to create the Steele dossier – with input from Fusion’s CEO Glenn Simpson, to repackage Blumenthal’s lies and “corroborate” some of the material through supposed foreign sources. Steele was also retained by the Obama Justice Department and connected with DOJ higher-up Bruce Ohr as his handler. Ohr’s wife was then hired by Fusion GPS as an opposition researcher against Trump, suggesting that the information flow between DOJ and Fusion GPS might have been a two-way entity.

The repackaged information was presented to a FISA court, and this time the warrant was approved. Essentially on the word of Sidney Blumenthal, a known liar and political hack.

There is evidence Page had been a confidential informant for the FBI in its counterintelligence efforts against Russian spies; none of that mattered when it was time for the Democrats to win an election. Page’s prior relationship with the FBI was repackaged as his being made a suspect in collusion with the Russians – and a meeting Page had with Rosneft CEO Igor Sechin was characterized by Steele as containing an offer of brokerage fees for a major stake of the company being sold to Western investors. That stake, valued at $19 billion, was ultimately purchased by Swiss firm Glencore PLC – a firm founded by Clinton donor Marc Rich, whose pardon at the end of the Clinton administration was one of the more ugly episodes in the history of American political corruption.

We now know that Mike Flynn, Trump’s national security advisor designate, was entrapped – set up by corrupt FBI agent Peter Strzok under the direction, it appears, of FBI Number 2 man Andrew McCabe. We now have a text message from Strzok to his paramour and FBI lawyer Lisa Page intimating that Obama was deeply involved in the activities in question, leading us to ask what did the president know, and when did he know it?

Now we’re waiting for the report of the Inspector General surrounding the FBI and DOJ investigation, or non-investigation, of the Clinton e-mail scandal. That promises to be a treasure trove of misdeeds – with a special emphasis on the meeting on the tarmac of the Phoenix airport between Bill Clinton and then-Attorney General Loretta Lynch.

With all of this breaking loose faster than most Americans can follow it, Adam Schiff is running around touting Russian pro-Second Amendment propaganda as a means of getting Americans to murder each other while being taken in by Russian comedians showing how easy it is to bait frothing-at-the-mouth partisan Democrats with salacious Trump dirt.

You really couldn’t make this stuff up. Carlson’s show figures to be must-see TV for the foreseeable future.

Interested in more national news? We've got you covered! See More National News
Previous Article Not From a Movie: New AI Can Predict When You Will Die
Next Article UPDATED: The Joe Lopinto Coffeehouse Video Caper Is One Of The Weirdest Stories You’ll See This Year