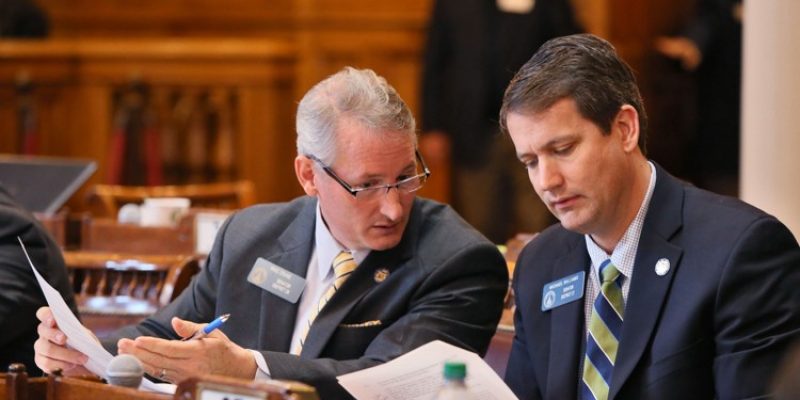 A new bill introduced by Sen. Michael Williams would allow public high school football coaches and public school employees to pray with their students. Williams, who is running for governor, introduced Senate Bill 361 in response to a lawsuit that the Freedom From Religion Foundation (FFRF) threatened against one Georgia school system last fall.

On October 25, 2017, the FFRF filed a complaint with the Coweta County School System (CCSS) after learning that its football coach, John Small, was praying with his team before games. FFRF argued that, “Coach Small’s conduct is unconstitutional because he endorses and promotes his religion when acting in his official capacity as a school district employee.”

Less than one week later CCSS  issued a guidance forbidding Coach Small from praying with his team. It also sent out a district-wide guidance states to public school employees, stating:

[Coaches cannot] join hands, bow their heads, take a knee or commit another act that otherwise manifests approval with the students’ religious exercise [when it can be perceived to display government endorsement of religion].

If Williams’ bill passes and becomes law, it would impact public school staff statewide at the beginning of the 2019-2020 school year. Called, the “Coach Small Religious Protection Act,” the bill permits public school employees to exercise their right to freedom of religion by expressing (or not) their faith. (This is already legal as it is the first right guaranteed by the First Amendment to the U.S. Constitution, which the FFRF apparently does not understand.)

It also protects “teachers’ rights to wear religious clothing, jewelry or symbols and engage in religious discussions and share religious materials with other faculty.”

Michael Haverluck at One News Now explains that

SB 361 address the aggressive fear and intimidation tactics being used by atheists to promote secular interests aimed at removing God and all vestiges of Christianity from the schools by manipulating laws that were never intended to eradicate the rights of government employees to live out their faith on school campuses.

Williams emphasized the need for the bill, arguing,

[Even though] religious liberty is the bedrock of our nation, [out-of-state groups like FFRF are] forcing their secular values on Georgia students. This is a much-needed protection for Georgia faculty members and students who incorporate their religious beliefs into their daily lives. The Supreme Court has held for over 50 years that religious beliefs don’t end in the school parking lot.

The Family Policy Alliance of Georgia expressed praise for Williams’ bill. One of the most read sites on Patheos, the Friendly Atheist, offered some not so friendly remarks.