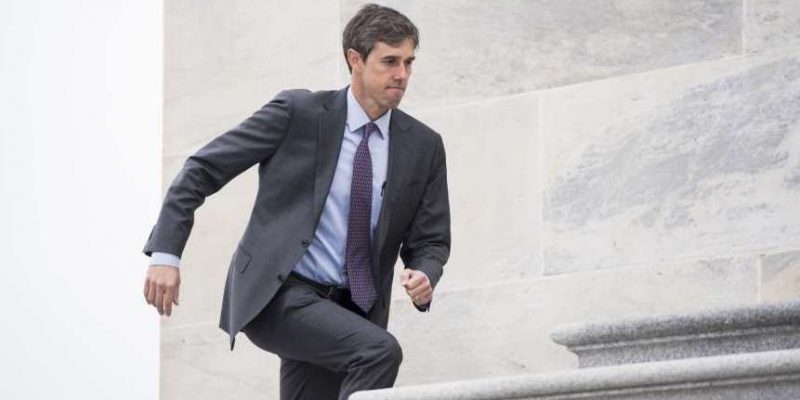 So, why is O’Rourke choosing to fight a losing battle?

Because he’s anti-Trump and pro-open borders. He wants to legalize marijuana and compares the Border Wall and national security to the Berlin Wall. In essence, he represents almost the exact opposite of Ted Cruz in his policy positions, and maybe even his character.

O’Rourke has been holding rallies, town halls and “jogging sessions” throughout Texas. The Associated Press (AP) describes his approach as a “suicide mission” that seems more like partying with him using profanity in a punk band-inspired campaign:

If it’s a suicide mission, O’Rourke’s campaign is a colorful one, with lively, occasionally profane rhetoric and attention-getting events that sometimes seem as much about partying as policy.

The Texas Tribune notes that O’Rourke has outraised Ted Cruz in nearly every quarter. He’s refused to take money from Political Action Committees (PACS), making the amount he’s raised even more impressive since it’s come from many small donations.

… The Senate race has been a financial fight since the beginning. O’Rourke raked in more than Cruz in the second quarter of 2017, while Cruz outraised O’Rourke in the third quarter.

While Cruz has consistently held a lead in cash on hand, O’Rourke has been closing the gap. They are $2.7 million apart after the fourth quarter — compared with $3.5 million after the third quarter and $3.9 million after the second quarter.

O’Rourke is similar to Cruz in that he says he’s anti-Establishment. The AP notes that at a microbrew stop he told roughly 250 people:

I feel like the Democratic Party up in D.C. is corporate politics. They’re listening to the corporations and the special interests and the PACs. And the folks who write the checks are calling the tune. It’s not you and it’s not me.

While he may have the money and the networking capabilities, his race is still an uphill battle. O’Rourke pledged to campaign in each of Texas’ 254 counties, where so far, he’s drawing large crowds in small, rural towns.

The El Paso Democratic Party chairwoman, Illiana Noemi Holguin, said, “If anyone can do it, Beto can. [He’s] going to all of these small, rural counties where, frankly, not a lot of Democratic candidates have gone.”

O’Rourke is a fourth generation Irish-American and former guitar player for the El Paso punk band, Foss, and later, The Mars Volta. His favorite phrase is “right on.” His father is a longtime Democratic county judge and his mother is a Republican. He’s bilingual, an avid runner and is seen as a rising star in the Democratic Party. He’s pro-abortion, which makes it difficult for Latino voters, who are mostly pro-life, to support him.

Texas has not had a Democratic senator since Lloyd Benson was reelected in 1988. It’s unlikely that that will change in 2018.