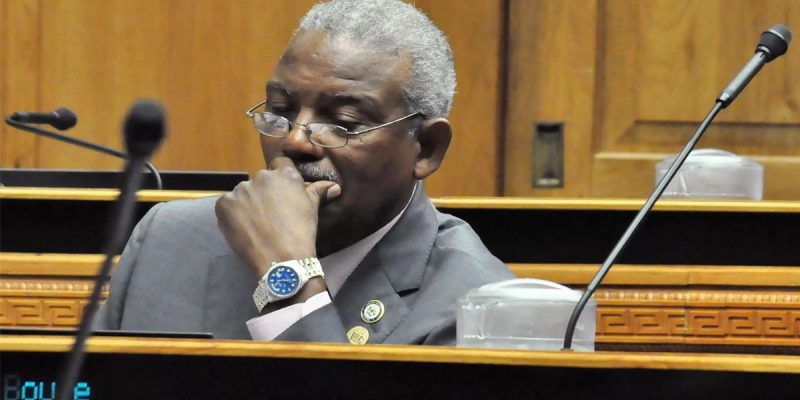 This is not a bad thing, mind you, and there are many who find it a tremendous source of entertainment amid a legislative special session aimed solely, and unnecessarily, at raising your taxes to meet a so-called “fiscal cliff” which is not as it has been advertised.

The claim of a $994 million deficit, which is the foundation of the governor’s special session call to begin with, should never have been taken at face value. We already know that Edwards has a credibility problem when it comes to fiscal matters. Just in recent days the governor issued a bizarre claim that he’d cut Louisiana’s budget by $600 million, then when that was debunked Edwards doubled down on the claim and said he’d cut the budget by $980 million.

Edwards has in fact grown Louisiana’s budget by nearly $5 billion since taking office. He’s grown the state-funded portion of that budget by more than $700 million. His position is simply not based in truth or reality; to be less charitable, it’s a bald-faced, self-serving lie aimed at deceiving Louisiana’s people into believing there is nowhere to cut in a $30 billion budget for a state of 4.6 million people.

When just three years ago Louisiana had a $25 billion budget, there was no crisis. TOPS was funded, as was the Minimum Foundation Program, hospitals were open, as were prisons, police and firefighters received supplemental pay from the state and universities didn’t close. It is simply not true that Louisiana will be amid a catastrophe if the $30 billion budget must be trimmed to $29 billion in order to balance.

And the claim of a $994 million budget deficit is grossly inaccurate because it doesn’t take into consideration at least three opportunities to either recognize revenue already coming into the state treasury or make common-sense changes to remedy the deficit without major pain.

First, because the state appears to be in a deficit mode the governor has the power to trim all statutorily dedicated funds by five percent, a small amount none of them will miss. That would, it’s estimated, reduce the deficit by $137 million.

Second, oil is currently trading at $11 per barrel more than the $51 projected by the Revenue Estimating Committee, and it’s likely it will continue to increase as the global economy heats up. As every dollar of oil prices translates into $12 million in revenue to the state treasury, it’s only a matter of time before the REC recognizes a revenue increase somewhere on the order of $130 million.

Third, the current estimate of state revenue from the tax reform passed by Congress in December is $302 million.

That comes to something like $569 million, meaning Edwards’ “fiscal cliff” is actually around $425 million. It might even be less. That’s an amount of money which could very easily be made up through budget cuts – if the state were to claw back just 10 percent of the growth in the Louisiana Department of Health’s budget since Edwards took office, for example, it would clear a $425 million budget deficit.

And none of these items have been addressed, which is the way Edwards likes it. His strategy is to force the legislators to operate on the assumption of a billion-dollar deficit in hopes they’ll be stupid enough to take the bait and pass tax increases in something like that amount, which is why he called the current special session despite no particular prospect that it would amount to anything of value.

That, plus the very real prospect that Edwards might engineer a coup to topple House Speaker Taylor Barras and replace him with another Republican more malleable and less independent from the governor.

That potential coup attempt has had an effect on Barras, who pressured a number of Republicans on the House Ways And Means Committee to vote five separate tax increases to the House floor on Sunday, which was among other things a show of good faith to the governor in terms of crafting a deal which would allow some tax increases in return for budget process reforms and changes to the state’s Medicaid program. It wouldn’t be fair to say Barras was in self-preservation mode amid coup rumors, but with the possibility the governor could engineer one by buying off enough of the GOP delegation to get to 53 votes for changing him out for a more friendly Republican it’s not totally irresponsible of him to seek a compromise.

Which means those tax increases went to the House floor, and while it would be quite difficult to find 70 votes for some of them, some involve only a simple majority of 53 votes in order to pass the House. For example, the bill changing the state’s treatment of excess itemized deductions would only require 53 votes – and it might pass the House with an increase in taxes of some $79 million. The problem with that bill is once it gets to the Senate it will be expanded and come back to the House with a price tag to Louisiana’s taxpayers of more than $150 million.

Word from the GOP delegation meeting earlier today is the excess itemized deduction bill is a dead letter among Republicans and cannot pass the House. We’ve heard that before, and perhaps it’s even true.

The problem is that while Barras is dragging Republicans to the table in an attempt to hammer out a deal with Edwards, the Louisiana Legislative Black Caucus is busy running for the political fringe. The LLBC went bonkers today, and might well have blown up the special session.

Special session update: the black caucus has issued an ultimatum to increase income tax by compressing tax brackets or they won’t vote for any bill. In other words, they are blowing everything up. #lalege

Here was a letter Rep. Joseph Bouie, the chair of the LLBC, put out today… 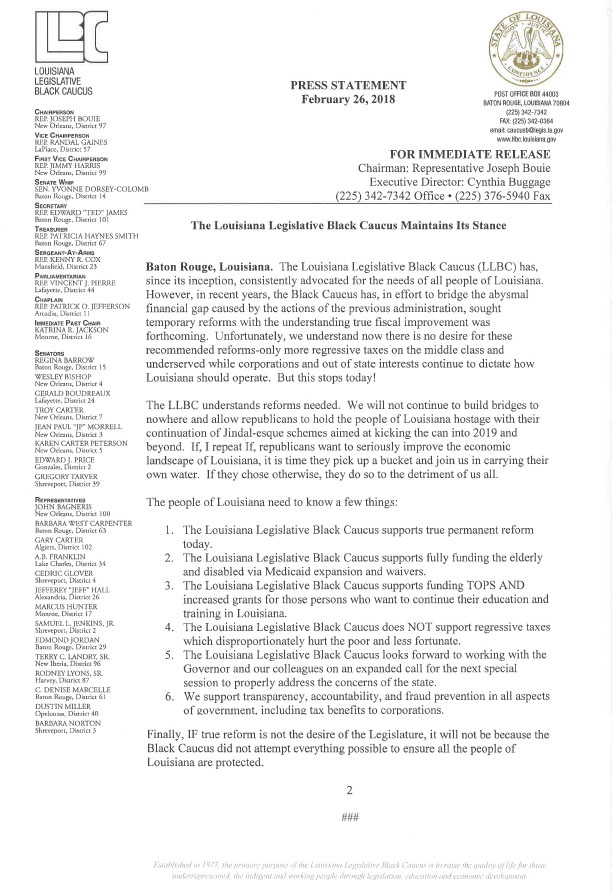 Here’s what the demand is, specifically. As of today, state income tax brackets look like this (for individual filers)…

What the Black Caucus wants is a tax bracket which looks like this:

So they want to double state income tax on everything you make between $12,500 and $25,000 and triple it for what you make between $25,000 and $50,000. That is a huge, huge amount of an increase and it’s a direct assault on Louisiana’s working and middle classes. If you’re an individual filer and you make $50,000, let’s say, you currently have a basic state income tax liability of $1,550, and if Bouie were to get what he wants you’d see that increase to $2,250. That’s a 31 percent increase in your taxes for absolutely zero benefit to you whatsoever.

Needless to say, at the Republican delegation meeting this idea was brought up and not a single member had so much as any interest in even discussing it. It is a one hundred percent dead letter with the Republicans.

After the Black Caucus issued this demand, Republican Rep. Reid Falconer of Mandeville put out this press statement…

Budget legislation stalled at the State Capitol this morning because Democrat members lobbed an unexpected ultimatum at House Republicans.

“Previously, Gov. John Bel Edwards told the Joint Legislative Committee on the Budget (JLBC) that changing tax brackets was not under consideration as we worked to solve the largely-overstated ‘fiscal cliff,’ as predicted by the Administration,” Falconer said. “Today, members of the Louisiana Legislative Black Caucus (LLBC) informed us that they will oppose any legislation to reform tax structure unless we agree to revert to tax brackets that were in place under the Stelly Plan – a plan the Legislature repealed 10 years ago.

“It’s an old adage that politics is like herding cats,’” Falconer said. “Apparently, the governor can’t quite herd even his own, and now we sit, and wait, at a cost to the taxpayers of about $60,000 a day.

“I called this Special Session a waste of time and money even before it started, and now we’re on the verge of accomplishing literally nothing while we’re here,” Falconer said. “This is just more absurdity as the governor continues to push the scare-tactic message of a $1 billion deficit that will almost certainly not even come to pass. The voters of Louisiana deserve better than this.”

Falconer’s comment appears very much on the mark, because Edwards now appears to be assuming the LLBC’s position – without which he has no bargaining leverage at all, it seems…

Unless Edwards comes around to the caucus’ way of thinking, which sounds possible, white Democrats will be pitted between siding with their party counterparts or standing with the administration to advance the governor’s agenda. “I think the answer is yes,” the governor told reporters this afternoon when asked if he was on the same page as members of the Black Caucus. “There is a process we have to go through and we are going through that right now.”

The political landscape at the Capitol is shaky at best. Caucus members insist they will not vote in favor of a sales tax increase above four pennies and Republicans contend they’ll never back the proposed income tax alteration. All the while a nearly $1 billion budget shortfall looms—and the special session must conclude one week from Wednesday.

It could be that this was all a trick Edwards and the Black Caucus concocted to move the goalposts on Barras – holding out the prospect of a deal in order to entice the House to move tax increases such as the excess itemized deductions and removal of some incentives to the state’s Quality Jobs economic development program to the floor and then create a crisis with this new demand. Or maybe the Black Caucus has really gone rogue and believes it has a lot more leverage than it does in attempting to kill the most likely revenue measure to pass, that being the quarter-penny sales tax redux the Republicans have offered as part of the framework of a deal.

Either way it’s becoming clear Barras doesn’t have a good-faith negotiating partner and the only viable strategy going forward is to blow up the special session and try again with next month’s regular session, in which no tax bills may be filed and the entire budget conversation must focus on the recognition of revenue already due into the state and the budget cuts Louisiana should have been discussing all along.

Interested in more news from Louisiana? We've got you covered! See More Louisiana News
Previous Article Why Was An Oberlin Student Suspended Over A Square Root?
Next Article LSU: The NCAA Tells Us Pete Thamel Is Full Of Crap