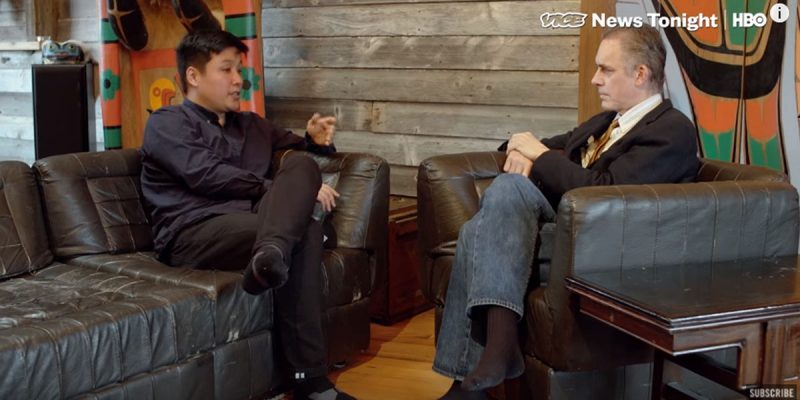 We found this interesting – it’s a segment the far-left HBO vehicle Vice News did on Canadian professor and clinical psychologist Jordan Peterson, whose new book 12 Rules For Life: An Antidote to Chaos is rocketing up the bestseller charts.

Peterson’s presentation to his audience is this: Grow up. His thesis is the primary means of achieving happiness in life is the assumption of responsibility, which is how most of us find our self-worth, and the culture around us is largely built on the avoidance of responsibility. Identity politics, which subsumes individual responsibility by assuming that as a member of a racial, ethnic, gender, sexual preference or political group your personal outcome is dictated by society – black people can’t succeed because of racism, women can’t succeed because of sexism, and so on – is a major piece of the culture’s assault on adulthood. Peterson pushes back against this.

In that effort he’s doing great service, because the reaction to left-wing identity politics is, among other things, the alt-right – which is not a proper reaction. Peterson’s argument, especially to straight young men, white or otherwise, is not to get caught up in either movement but instead to grow up and take care of one’s own business. He’s forceful in making that argument and he also carries the correct tone in making it. He’s a no-nonsense, dispassionate and highly intellectual operator who isn’t afraid to state facts which might make some people uncomfortable.

That’s clear in the interview Peterson does with Vice News’ Jay Kang – even though it’s very obvious the interview was heavily edited and one gets the impression it’s edited to make Peterson appear out of the mainstream. After his destruction of Channel 4’s Cathy Newman in the UK earlier this year, perhaps the response of those on the Left to Peterson is just to edit him that way so as to marginalize him.

But if that was the intention, Vice wasn’t successful. The high point of this interview, during a discussion of sexual harassment in the workplace – which Peterson says at the outset is a bad thing and should stop, but isn’t confident that will happen since we don’t even know after 40 years of coed workplaces what the definition is – is when Peterson gets into a discussion about makeup and high heels.

He says, with the backing of physiology, that makeup and high heels can be defined as a sexual display – rouge on one’s cheeks and red lipstick mimic a physiological response to sexual arousal, and high heels create a sexualized presentation of a female body. Those are facts; they do. He’s not saying women who wear makeup and heels to work are asking to be harassed, but Kang does get him to admit there is some hypocrisy there.

That obviously invites a discrediting of Peterson along the lines that he says “she’s asking for it,” which is where we are in society – say something nuanced and out of the current stupid ordinary, and you’ll shortly be beaten bloody by an army of straw men – but there is a point here. Namely, that as Peterson says we don’t know what the rules are. Why would anybody wear high heels? It’s not like they’re particularly functional or comfortable. Women wear them because they look good, and they accentuate the desirable features of the female body. That doesn’t mean a woman wearing them is inviting a sexual encounter but it does suggest she wants to be noticed. And sometimes the noticing is a positive experience, and sometimes it isn’t.

How do we handle and police the second part? Clearly the over-the-top puritan hysteria we’re currently embroiled in isn’t the right way, just as the Mad Men-style patriarchical approach it’s supposedly a reaction to wasn’t (if it was ever actually like that).

Peterson would argue the answer is for people to act like grownups – that is, for men to act like gentlemen, and for women to either tone down the presentation or to be big girls about the attention they might receive. That’s a message which resonates despite the filter media organizations like Vice News attempt to put on it.