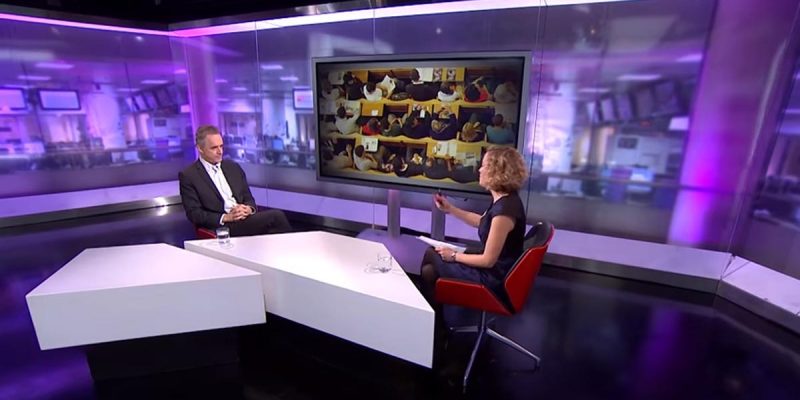 Clips from this interview, in which Canadian clinical psychologist and University of Toronto professor Jordan Peterson more or less demolished British Channel 4 left-wing TV presenter Cathy Newman, have trickled out onto the internet for the last couple of weeks or so, and we’ve held off doing a Hayride post about it thanks to lots of other items on our plate. But we didn’t want to let it get too far into the past before bringing it to you, because there is a lot in that interview worth discussing.

First, here’s the full exchange. It goes about a half-hour and it’s really worth making the time for…

Peterson appeared with Newman as part of his UK tour in support of his new book 12 Rules for Life: An Antidote to Chaos, which is a manifestation of a lot of the highly-interesting observations he’s picked up over a career of research and clinical work. Channel 4 is basically the MSNBC of the United Kingdom; it gets exceptionally weak ratings for its news programming and seeks the most outrageous leftist positions in the name of objective journalism, with Newman as a point woman in that enterprise.

One reaction to this exchange has been that Newman might be the worst interviewer in the history of television, but that’s not quite correct. As James Delingpole noted in his Breitbart.com review of the exchange last week, Newman’s chief trait on display is an anti-intelligence which to a viewer not imbued with the post-modernist Social Justice Warrior mentality oozing from her pores is more than a little irritating to watch. More on that in a second, but she actually does a reasonably good job of examining Peterson’s point of view.

That, to be fair, happens because Peterson is tremendously articulate and doesn’t lose his cool despite insulting question after insulting question. He gives a master course on how to use aggressive and highly inaccurate questions as an opportunity to clearly state one’s own position, and that’s what makes this interview such a milestone in the history of the culture war within Western civilization.

I don’t think I have ever witnessed an interview that is more catastrophic for the interviewer. Whatever else anybody might think of him, Professor Peterson is a man of remarkable learning and experience, and does not appear to have arrived at any of his views by the now common means of ‘I reckon’. Yet Newman, who approaches the interview with the trademark sourness she employs for everyone she expects to disagree with, treats this is just another chance to burnish her own social justice credentials and expose her guest as a bigot. Big mistake.

By 11 minutes in [Newman] is saying ‘I think I take issue with (that)’, before demonstrating that she can’t. Soon she is reduced to dropping the bombshell observation that ‘all women are different’. By 16.45 there is a palpable win, as Peterson points out that Newman has exactly the disagreeable and aggressive qualities that allow certain types of people to succeed. By 19.30 she is having to throw out things to him that he hasn’t even said, such as ‘You’re saying women aren’t intelligent enough to run top companies’. A minute later and she is reduced to countering empirical evidence with anecdote. Peterson presents the data about men in general and Newman responds with the ‘I know plenty of men who aren’t (like that)’ card. Shortly after that (at 22.25) Newman is reduced to spluttering and then silence. She tries to pull herself together. But she can think of nothing to say. She tries to whip herself back up to a fever of indignation, but that doesn’t work either. And then finally she tries to finish off the interview in the same way the Today programme did by taking up a half-humorous evolutionary case-study Peterson has written about (lobsters) and used it to try to present him as some kind of madman or imbecile.

One observation to make about the exchange is that for the entire 29 minutes and change Newman doesn’t challenge Peterson with a single accurate characterization of anything he’s said, and so he has to preface each answer with, essentially, “No, that’s not my position at all.” Conservatives engaged in political or cultural debate will readily recognize this pattern, as it is the entire cultural debate boiled down to a single experience; namely, the Social Justice Warrior crowd’s modus operandi is to open with a sloppy calumny of the conservative position or its motive, and thus frame the battle with the Right on the defensive. Usually this takes the form of an accusation of racism, sexism or some other form of bigotry, which in Peterson’s case consists of him trying to explain with proven facts that circumstances feminists like Newman decry as evidence of male chauvinism aren’t quite as childishly simple to diagnose.

The discussion of why there are only seven female CEO’s atop FTSE 100 companies in Great Britain was a perfect example. The fact is there is a very small universe of people, hardly representative of the general population, who are either capable of or interested in being the chief executive of a large corporation; after all, to achieve CEO status of such a company takes decades of unfailing work and a level of sacrifice of one’s life – family, social, recreational and otherwise – that most people male and female simply will not make. Peterson notes that corporate CEO’s are almost universally highly intelligent and extremely conscientious people willing to make those sacrifices, and that they’re some of the toughest human beings on the planet. He doesn’t discount the fact some of those people might be female.

But what he does assert is that on balance women are much more agreeable than men, and agreeableness is a poor predictor of success in the workplace. This is unquestionably true. Women, generally speaking, are more cooperative and less competitive than men – and it’s the competitors who tend to move up the corporate ladder, get the raises and so forth. That, along with the fact most women will get to the point where they’ll value children and family more than career ambitions which means they stop climbing the corporate ladder, is what accounts for much of the disparity that Newman complains about and not some insidious sexism Newman hints at.

Nowhere does Peterson say women can’t do the job or that they don’t deserve the same opportunities men have. He notes that he’s had clients in his clinical practice who are women who do deserve those opportunities and he’s worked with them to make them better able to access them. But that work involves developing traits which could be regarded as more masculine – like how to be a tougher negotiator, how to be less agreeable and so on. Peterson notes that Newman isn’t very agreeable and that it’s clearly helped her in her career.

And at the climax of the interview Newman brings out the ordeal which brought Peterson to the international spotlight; namely, his refusal to adopt the dictates of the Canadian government that transgendered people be addressed by a specific set of pronouns. Newman hits him with a patently absurd, monumentally stupid question: why is his freedom of speech more important than the rights of others not to be offended. Most people subjected to such an insulting challenge might lose their cool, or at least assert there is no right not to be offended – but Peterson handles the question perfectly, noting that Newman’s questions infringe on his own supposed right not to be offended, and he’s not complaining because it’s her job to dig a little to find the truth. He then parries another stupid question about how he’s transphobic, noting that he’s never been in a position where he refused to call a male student in a dress in one of his classes by his/her preferred pronoun and in fact he would call such a person “she” if asked; his issue is with the governmental body attempting to dictate the form of his speech.

The exchange is a very good exposition of the cultural divide. In Peterson you see someone who clearly operates on the basis of disciplined thought, logic and reason. In Newman you see the reflexive, emotionalist postmodernism of the Social Justice crowd. And when a logical thinker like Peterson can avoid being dragged into the muck by remaining dispassionate about the slurring of his position and his work, he’s able to dismantle Newman in no uncertain terms.

This is an interview which ought to be studied by anyone seeking to run for office or serve as a consultant to those who do, or anyone possessing or seeking a career in public relations. It is a textbook example of how to articulate a position under fire. And it’s a pretty clear display of the shoddy intellectualism of the post-modern Left vis a vis a defender of the Western civilization it so seeks to undermine.