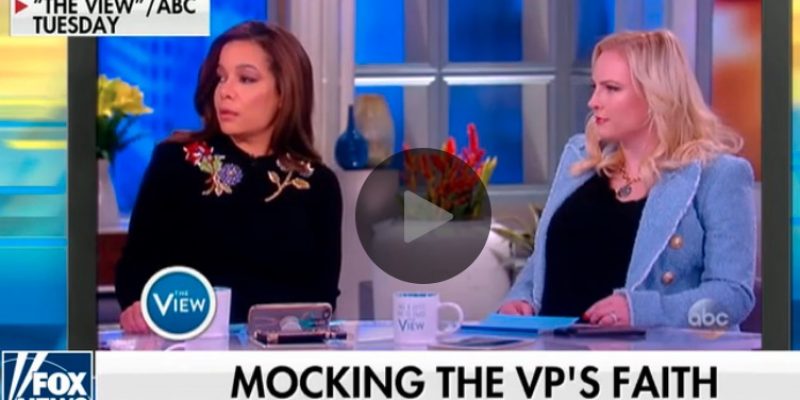 Vice President Mike Pence gave the best response to recent criticism about him made by the television entertainers of ABC’s “The View.” Several women on the show mocked Mr. Pence’s Christian faith and called it a “mental illness.”

Here’s what he said:

Mike Pence responds to Joy Behar of The View calling his Christianity a mental illness:

I love Mike Pence. He has a way of speaking that doesn’t directly steamroll deranged leftists but allows a broad opening for the American People to steamroll them.pic.twitter.com/l7BKm5KDSv

He replied to The View’s show on Tuesday after they played a clip from “Celebrity Big Brother,” during which the former White House staffer Omarosa Manigault Newman remarked that people should be worried about the Vice President. She said on Big Brother, “I am Christian, I love Jesus, but he thinks Jesus tells him to say things.”

Then the women of The View went on the attack. Hostin called Pence “a hated figure” in Indiana. (She went to law school there, which she argues justifies her knowledge about his popularity.)

Then Joy Behar chimed in saying,

“It’s one thing to talk to Jesus. It’s another thing when Jesus talks to you;” and that “hearing voices is a ‘mental illness.’

As a Christian, that’s just par for the course. You talk to Jesus, Jesus talks back. What concerns me is, how long is the conversation with Jesus?

Behar then joked, “Can he talk to Mary Magdalene without his wife in the room?”

No one at The View contacted the Vice President to ask for an explanation. Nor did they interview Omarosa. Their hatred and ignorance about Christianity and prayer and the faith of the Vice President only appeared to reveal their lack of character.

Interested in more national news? We've got you covered! See More National News
Previous Article It Would Have Been Nice If The FBI Had Interviewed Nikolas Cruz After He Announced His Intentions…
Next Article No Good Deed Goes Unpunished, Sen. Cassidy