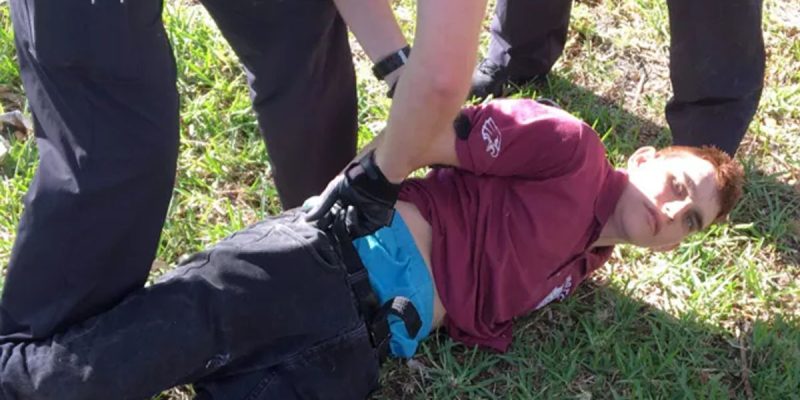 …in a comment to a YouTube video last year to “be a professional school shooter.” The poster of the video under which Cruz left that comment alerted both YouTube and the FBI, and he was interviewed about it, both at the time and yesterday after Cruz showed up at Marjorie Stoneman Douglas High School in Lakeland, Florida, where he had attended before being expelled for “disciplinary” reasons, killing 17 people and wounded several more in one of the worst mass shootings in history.

Last fall, a Mississippi bail bondsman and frequent YouTube vlogger noticed an alarming comment left on one of his videos. “I’m going to be a professional school shooter,” said a user named Nikolas Cruz.

The YouTuber, 36-year-old Ben Bennight, alerted the FBI, emailing a screenshot of the comment to the bureau’s tips account as well as calling the Mississippi FBI field office. He also flagged the comment to YouTube, which removed it from the video.

Agents with the bureau’s Mississippi field office got back to him “immediately,” Bennight said, and conducted an in-person interview the following day, on Sept. 25.

“They came to my office the next morning and asked me if I knew anything about the person,” Bennight told BuzzFeed News. “I didn’t. They took a copy of the screenshot and that was the last I heard from them.”

Bennight, who goes by BenTheBondsman on YouTube, didn’t have much information to offer the FBI after yesterday’s killing, because how would he? Cruz was some anonymous nut who left a comment under one of his vlogs. Here was what he posted last night after Cruz’ murderous rampage…

A good question to ask, that the FBI has yet to answer, is why rather than following up with Bennight they didn’t do the same with the actual threat. Cruz practically had a neon sign reading “Soon-To-Be Mass Murderer” hovering over his head, so much so that after Wednesday’s atrocity survivors at the school said it wasn’t a surprise that he did what he did.

“Everybody predicted it,” said one of them.

Cruz was a perfect example of trouble coming a mile away. He was an adopted child who adoptive parents had both died and he had no one. He was taken in by a family friend but wasn’t happy and was living with the family of a school friend. He’d had several run-ins with the law and neighbors reported that his house had been visited by the police often, and at school before he was expelled he’d exhibited very strange and threatening behavior – including, apparently, stalking the new boyfriend of his ex-girlfriend to whom he’d been abusive. What’s more, Cruz left a trail of violent and frightening social media posts which made him a textbook case of a potential mass killer.

All of which could have been rolled up into a neat package if the FBI had done a good job of following up on Cruz back in September of last year.

It’s fair to note, of course, that even then it wouldn’t have necessarily meant Cruz would have been stopped. So far as we can tell he hadn’t done anything he could have been arrested for until yesterday. The school itself had banned him from campus wearing a backpack, assumedly out of concerns he’d bring a bomb, and that didn’t stop him from doing what he did.

Armed guards at the school might have prevented the rampage from being what it was. A gun ban such as what’s once again being thrown around as a “solution” to this is hardly likely to fix the problem of a violent psychopath bent on mass murder; if Cruz wanted to get high rather than to shoot people he could easily find illegal drugs like cocaine or heroin, so it’s hard to imagine he couldn’t have secured a firearm for his purpose.

But we don’t arrest people for criminal thoughts. It takes criminal action to get you off the streets.

In a better world there would be a way to intervene in the life of a Nikolas Cruz before he ends the lives of others. But this case shows we don’t have a competent enough authority to identify a Nikolas Cruz much less to give him the help he needs. The FBI had him on a silver platter and couldn’t stop him.

We are, at the end of the day, on our own. We have to protect ourselves and our loved ones, and we have to guard against the evil all around us.

It’s always been this way. And it always will be.