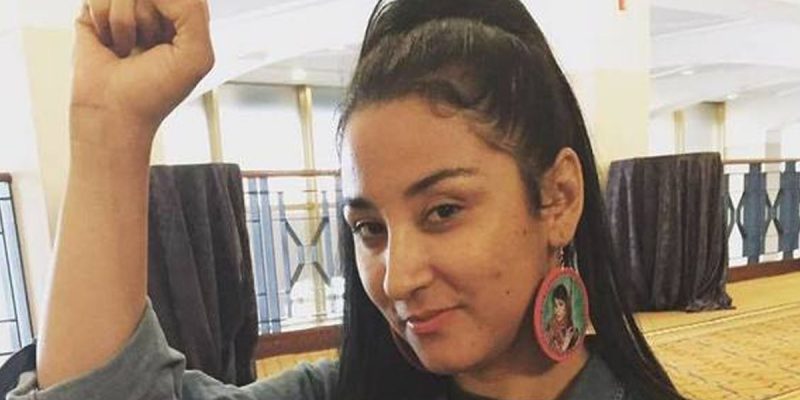 …by detaining an illegal immigrant who’s violating the law being in this country and furthermore engaging in political agitation to support the killing of America’s children. We’d say that’s a sign ICE is doing a hell of a good job enforcing federal immigration law and taking out the trash. But not according to a rather strange left-wing outfit called Fund Abortion Now, which blasted this press release out to e-mail inboxes across the country, including ours for some reason…

The National Network of Abortion Funds demands the release of Alejandra Pablos, an undocumented abortion storyteller with We Testify, a program of the National Network of Abortion Funds, and immigration activist being held by Immigration and Customs Enforcement (ICE) in Arizona. The morning of March 7, 2018, Alejandra faithfully appeared at a check in with ICE in Tucson, where they detained her for what is believed to be ‘retaliation’ for her political activities and protests of our nation’s inhumane immigration and anti-abortion policies. ICE has said that she cannot be released as she is subject to detention without access to a bond.

Alejandra is a fierce and courageous abortion storyteller who speaks passionately about her experiences, as you can see from her video posted after she was detained. “They are trying to tear our movement and our community apart and I’m not going to let that happen.” Alejandra ends the video by explaining, “They are retaliating against all activists and organizers. I need you to fight for me on the outside as I am fighting inside.”

Our oppressive borders already dehumanize and criminalize people, and by trying to control our bodies, our fight for reproductive justice is bound up with immigration justice. ICE’s decision to detain Alejandra is yet another heartless move by the unjust immigration system to target people who speak out.

“By detaining Alejandra Pablos, without bond the government sending a message that it’s not safe to peacefully protest their brutal, xenophobic immigration policies. Her detention makes us want to fight harder against the ways this administration is attempting to dehumanize and criminalize people for fighting for their human rights. In this moment and every moment immigrant justice is bound with reproductive justice. We send love and support Alejandra and to all undocumented people, of all ages, who have had their rights taken away as this government attempts to exercise control over our bodies.”

In Alejandra’s own words, on a press call commemorating the 45th Anniversary of Roe v. Wade:

“Living in Arizona made it clear to me that families like mine weren’t safe, we weren’t guaranteed security. Every day I saw families being torn apart because of a piece of paper, documents they didn’t have. I saw parents being incarcerated and deported because there is no pathway to citizenship for most people. My views on reproductive justice and parenthood were informed by the sacrifices people made to flee their countries and risk their lives to come here for a better future.When I became pregnant, I knew the current political situation would devastate the family I would create. The same people who would force me to continue my pregnancy are the same people who would rip my baby from my arms and deport me because of my immigration status.”

According to Mijente’s press statement on the case, “Pablos was a legal permanent resident who was placed in deportation proceedings in 2011 after substance-abuse related arrests and spent two years detained at the Eloy Detention Center in southern Arizona. Since her release she has been on probation and checking in with ICE frequently. She is in the process of requesting asylum based on dangers she would face as a political organizer in Mexico.

In early January, as Pablos was leading chants at a peaceful protest in Virginia outside of the Department of Homeland Security (DHS), she was abruptly detained by local agents. It appears that after the protest in Virginia, one of the ICE agents called her deportation officer in Tucson, Arizona, and sought to get her detained in retaliation for her protest.

This morning, Pablos showed up to her check-in with ICE in Tucson, she was taken into custody. She will not have a chance to be released or to pay a bond until she sees an immigration judge at an indeterminate time.”

Alejandra Pablos is what you’d call a Dreamer, in that she was brought to Tucson, Arizona by her illegal alien parents from Mexico when she was a baby. She was given Legal Permanent Resident status, but lost it as a result of bad behavior on her part – she committed several misdemeanors including a DUI. Pablos spent a while in a private detention facility after being picked up by ICE in 2011 at her probation office (which is ICE doing what they’re supposed to do; namely, to detain illegal aliens who run afoul of the law). Pablos says she was in that detention facility for two years, but that’s not true – if she’d spent two years there she wouldn’t have been available to be jailed in February and March of 2012 for a second DUI offense (aggravated DUI was the specific charge), which put her in the state prison in Arizona. Pablos has an arrest record going all the way back to 2006.

And after she got out of the detention facility Pablos got herself pregnant and proceeded to have an abortion – an experience which apparently turned her into an advocate not only for illegal aliens but for abortion – it’s pretty clear she found a way to catch a paycheck out of that advocacy, and a couple of organizations, one being the National Latina Institute for Reproductive Health and another called the National Network of Abortion Funds, appear to have stepped in to provide that. She lives in DC now, though every three months she has to go back to Tucson to deal with the probation office, and that’s where she was detained this week.

The National Network of Abortion Funds is a hoot and a half, by the way. Here’s how it describes itself at its website…

The National Network of Abortion Funds builds power with members to remove financial and logistical barriers to abortion access by centering people who have abortions and organizing at the intersections of racial, economic, and reproductive justice.

If you need a translation for that, try this one – these people stick their hooks into women who go in for abortions and propagandize them into left-wing advocacy with the argument that they shouldn’t have to pay for their abortions. You should pay for those.

And with those hooks laid in, they’re now on the open-borders bandwagon.

Which is where Alejandra Pablos fits in, as an “undocumented abortion storyteller.” Abortion storytellers are invaluable, you know – and the undocumented ones are truly priceless. It’s like this crowd didn’t learn their lesson with Emma Goldman a century ago. Nobody gave a red hot damn when Goldman was deported back to Russia, and it’s hard to imagine too many regular Americans will care any more about this one.

We can’t say that this is going to turn out to be a cause celebre on the Left. We wouldn’t particularly bet against it – they’ve rallied around even more off-the-wall things than this.

And we aren’t completely without sympathy for Pablos’ situation. She isn’t in America due to her actions, and that makes her status confusing – and while most Americans would probably say something ought to be done to make her legal as a Dreamer, you can’t say it’s the fault of our immigration policies which caused her problem. Her problem was caused by her parents, who didn’t follow those immigration laws when they brought her here, and by doing so have essentially made her stateless. Worse, her mother has become a U.S. citizen somehow – and was shocked to discover that didn’t make Pablos one.

She’s also made her problem a lot worse by getting herself arrested a lot, which makes her exactly the type of person ICE is trying to get rid of. That isn’t a particular policy of Donald Trump’s “xenophobic” administration, by the way – she was initially detained when Barack Obama was president. There are so many stories about illegals getting drunk and killing people in car accidents it’s become a cliche’, with the latest high-profile example being the death of Indianapolis Colts linebacker Edwin Jackson last month.

After that experience you’d think Pablos would recognize that she didn’t need to be skirting the law anymore if she wants to become an American citizen, but instead she decided to show up at DHS headquarters for some political agitation and got herself arrested. Now the people she works with are accusing ICE of “retaliating” against her…by doing their jobs.

Oh – and Pablos is also demanding asylum in the U.S. because she says she’s in danger in Mexico due to political agitation she’s engaged in there.

Somehow this is supposed to be a viable mascot for the abortion industry and open-borders crowd. Given the state of left-wing political activism, nobody ought to be surprised.