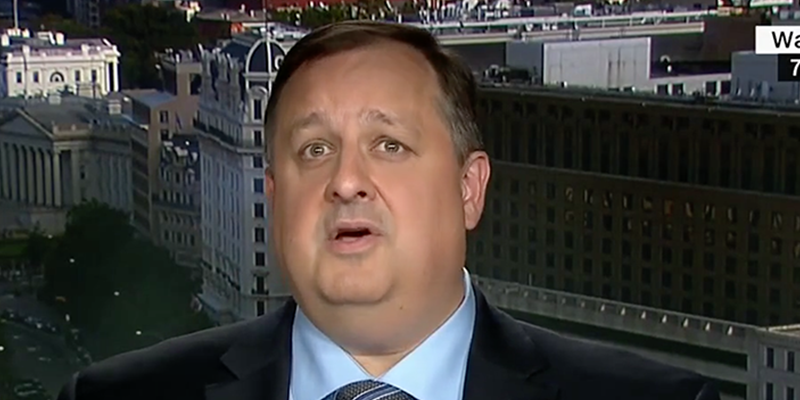 As an attorney, I am frequently embarrassed by the actions of certain members of my profession.  When we speak about the law, we are supposed to represent the facts and the law accurately, without misleading courts, fellow counsel, or the public.  Obviously, attorneys are hired to represent particular clients with particular positions, and we must do so zealously, but we are supposed to put forth colorable arguments and back them forthrightly.  Attorneys who misrepresent the law for personal reasons do serious damage to the profession.

Former Office of Government Ethics Director Walter Shaub, who served in that position from 2013 to 2017, does not take these sentiments to heart.  Earlier today, Shaub posted a Tweet today (as shared by Kenneth Vogel, former chief investigative reporter at Politico and currently a reporter for the New York Times) that was pretty brazenly inaccurate: 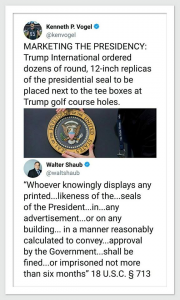 That’s a lot of ellipses.  Nine of them, in fact.  Here’s how the relevant statute, 18 USC 713(a), reads without truncation:

I cannot find anything in the general provisions of Title 18 that in any way defines any part of the phrase “a false impression of sponsorship or approval by the Government of the United States or by any department, agency, or instrumentality thereof,” which leaves us with a plain language interpretation of the law, i.e., looking at the words how they would ordinarily be understood.  Likewise, the rule of lenity requires that in any penal statute, any ambiguity must be resolved in favor of the accused, not the government.  Accordingly, if there is any reasonable amount of ambiguity as to what constitutes that element of the offense, there’s no criminal violation.  Criminal statues must be fairly clear as to the behavior being proscribed.

Here, Donald Trump, as president and head of the unitary executive branch of government, may reasonably be considered as authorized to “approve” of something on behalf of the U.S. government, or at least by “approve” of something on behalf of some department, agency, or instrumentality of the U.S. government.  Thus, there is at least arguably no “false impression of … approval” when Trump puts the presidential seal on the holes of his golf course where he has often (some say way too often) played during his presidency.

Sure, we can argue that Trump is crassly using the presidency to promote his golf course and monetize the presidency.  We can also argue that 18 USC 713(a) could be read in such a way as to render Trump’s use of the Presidential Seal illegal.  However, that doesn’t get around the fact that President Trump did not violate the clear, unambiguous language of the statute.

Accordingly, Shaub misstated a crucial element of the offense and then reached an untenable conclusion in order to make a meritless jab at Trump.  One person actually Tweeted back to Schaub that his conclusion was false because he omitted “key words” from the statutes.  Shaub responded, without admitting fault: “Are you kidding me? That’s ridiculous[.]”  He later replied: “The government does no[t] sponsor or approve of a golf course” and that “[t]he false impression [this] creates is that this is somehow a presidential golf course.”

Of course, that’s merely an interpretation.  Another interpretation is that Trump is approving of his own golf course in his capacity as president and simply using the Presidential Seal for that purpose.  Nothing in the plain language of the statute, or in the legislative intent, refutes that interpretation.  You might not like what Trump is doing, but the statute does not unambiguously encompass the conduct.

Indeed, it is fairly clear that this statute was not designed to restrict the president’s use of the Presidential Seal in any way.  This was made more clear in 1972, when Executive Order 11649 was promulgated to clarify 18 USC 713:

Except as otherwise provided by law, the knowing manufacture, reproduction, sale, or purchase for resale of the Seals or Coats of Arms of the President or the Vice President of the United States, or any likeness or substantial part thereof, shall be permitted only for the following uses:

Bizarrely, Shaub actually cited Executive Order 11649 in a subsequent Tweet without any explanation or analysis.  This is very curious.   First of all, an executive order cannot expand the scope of a criminal statute, but can convey prudential limits on enforcement to the executive branch.  Secondly, this executive order seems to vindicate Trump, stating the commonsense rule that the president has unrestricted use of the seal that refers to the office he holds.  If the president wants the Presidential Seal emblazoned on every hole of the golf course he owns and regularly plays, either directly or through a corporate entity, he is certainly “us[ing]” it.

Alas, Shaub’s behavior should come as little surprise.  Before Shaub resigned his position, back in May of 2017, former RNC counsel Charlie Spies lambasted him in the Washington Examiner for being a partisan hack who misstated the law to suit his anti-Trump crusade:

Office of Government Ethics Director Walter Shaub proved himself to be a partisan hack a few months ago when he, in a stark break from tradition, started tweeting public criticism of then-President-elect Trump. Of course, partisan hackery is a dime a dozen inside the Beltway, but with his March 9 letter to Deputy White House Counsel Stefan Passantino, Shaub proved himself to also be ignorant of the very law on which he is charged to provide guidance.

The nuanced legal point that raised the ire of Shaub and Rep. Elijah Cummings, D-Md., was Passantino’s footnote in a letter regarding Kellyanne Conway’s praise of Ivanka Trump’s products, and whether such public praise was a violation of the legal prohibition against using one’s public office for private gain.

Passantino correctly explained that the referenced prohibition only applies to employees of executive agencies, and employees of the White House Office are not considered employees under the rule.

The legal concept that the White House Office is not an executive agency has been upheld by courts in a variety of contexts for the last 20+ years.

Reasonable people can disagree about what ethics rules should be voluntarily instituted by any administration, but Shaub loses moral authority to comment on government ethics when he misstates the law in furtherance of his opinions.

Apparently Shaub hasn’t changed, and I would go further than Spies.  I call this kind of hackery unethical and unworthy of a licensed attorney.  It is certainly appropriate to push prudential rules and accuse an administration of pushing boundaries.  However, cavalierly accusing people of crimes based on partisan animus is beneath a lawyer, or at least an ethical one.

Interested in more national news? We've got you covered! See More National News
Previous Article The Taxes Failed, The Special Session Imploded, And Now It’s All Reactions And Recriminations
Next Article Don’t Be Too Shocked At This, But They’re Already Accusing The St. George People Of Racism (Again)