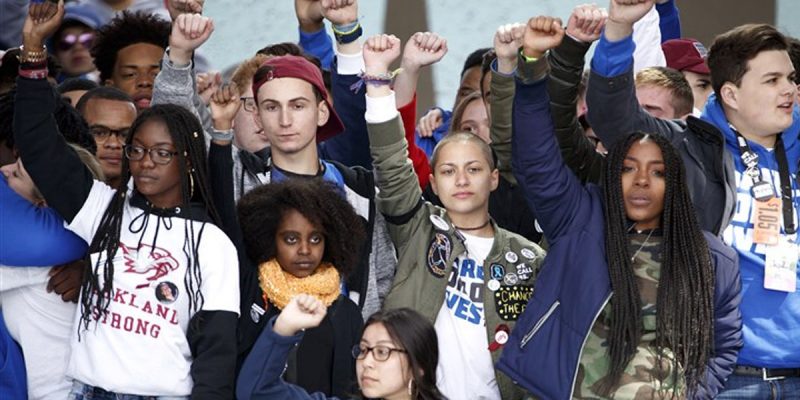 Today, students from around the country will converge on Washington D.C. and other locations for the “March for Our Lives” rallies. The organizers are survivors of the horrific February 14th shooting at Marjory Stoneman Douglas High School in Parkland, Florida that resulted in the deaths of 17 people, both students and faculty members.

These rallies will receive massive media attention, which is in stark contrast to the press blackout that is given to the tens of thousands of students who visit our Nation’s Capital every year for the “March for Life” rally. The reason for this double standard is obvious. The liberal media agree with the students advocating increased gun control but oppose those supporting a pro-life agenda.

The Parkland, Florida students are being supported by an impressive array of Hollywood stars and Democratic Party leaders. George Clooney and Oprah Winfrey both donated $500,000 to this cause. Clooney declared his support for the students, telling them that their efforts are making him “proud of my country again.”

Of course, the message from the rallies will be centered on imposing stricter gun control measures across the country. These students and their financial backers want an array of new laws passed, including a ban on assault rifles, more advanced background checks and an increase in the age limit to 21 for the purchase of firearms.

This agenda fits nicely with the aims of liberal media outlets such as Time Magazine, which featured five pro-gun control students on its latest cover. Interestingly, Stoneman Douglas high school students who are supporters of the Second Amendment were not invited to participate in the cover shoot. In fact, one of them, Kyle Kashuv, was scheduled to appear as a guest on CNN, but his interview was canceled when his anti-gun control viewpoint was discovered. Sadly, in our current biased media environment, there is no interest in healthy debate and discussion, only indoctrination.

Despite the media narrative, the tragedy at Stoneman Douglas High School was not caused by the National Rifle Association or the Second Amendment. It resulted from a series of mistakes by local law enforcement and the FBI. The killer, Nicolas Cruz, was identified twice to the FBI as a potential school shooter. These warnings were ignored. Local police made over three dozen visits to Cruz’s home to check on various complaints lodged against him. Despite these clear indications of trouble, Cruz was never arrested, so he was able to legally purchase a firearm. To prevent another school shooting, we need to enforce the laws already on the books and take seriously warnings about potential school shooters.

Another crucial step that needs to be taken is for all schools in America to improve security. This includes armed guards, limiting entry to school buildings and installing metal detectors at entrances. Also, interested teachers should be allowed to receive training and carry concealed firearms in schools. This is another layer of protection for students in case security guards are not nearby or are unable or unwilling to act when a shooting takes place.

At Stoneman Douglas School, an armed security guard refused to enter the school building and engage the shooter. Fortunately, at Great Mills High School in Maryland this week there was a different outcome. In this case, a student brought a gun to school and shot two classmates. Thankfully, the school resource officer engaged the student, eliminated the threat and saved many lives.

It was another case of a “good guy” with a gun ending the murderous plans of a “bad guy” with a gun.  This is exactly what happened in Alexandria, Virginia last summer when two U.S. Capitol Police officers engaged a shooter who was intent on killing Republican congressmen at a baseball practice. The Capitol Police officers killed the gunman, thus saving lives and displaying the value of trained individuals with firearms protecting lives.

To prevent another mass shooting, we need to arm and train more Americans, improve security at schools and other facilities and eliminate “gun free zones.” In almost every one of these mass shootings, the killers chose “gun free zones” such as schools to commit their heinous crimes. It is important to note that these lunatics did not choose to launch their attacks at gun shows or police stations, knowing they would be met with quick and overwhelming return fire.

Hopefully, students and other Americans advocating real school security measures and opposing gun control will make their voices heard. While it will not receive as much media attention, it is vitally important to organize this movement. For the preservation of our country, the Second Amendment must not be infringed. Clearly, the stakes in this debate could not be higher.

Interested in more national news? We've got you covered! See More National News
Previous Article The NAACP In Baton Rouge Is On The Alton Sterling Kick Again, And Put On A Circus Last Night About It…
Next Article Republican Joint Resolution Seeks to Repeal Consumer Protections, Increase Payday Loan Debt