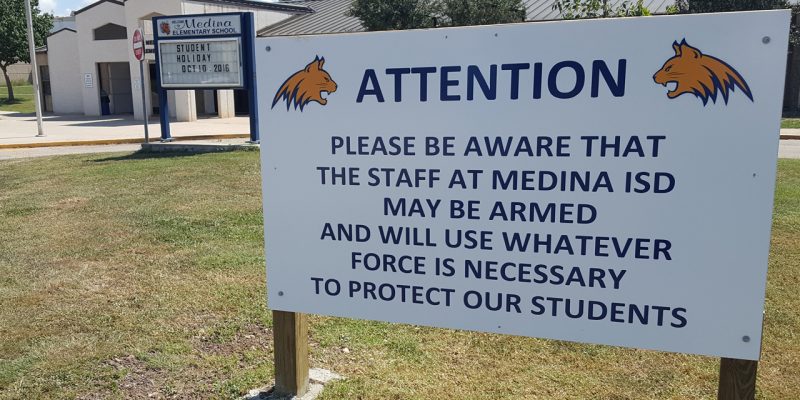 The Medina Independent School District (MISD) has no gun violence for a reason. Its teachers and staff are armed. It’s a small rural town roughly an hour from San Antonio, and most people may have never heard of it. But, its administrators argue that well-trained staff have proven to be an asset to the district.

In 2016, legislators attempted to make possible the arming and training of teachers a state-wide policy, but the legislation did not get very far in Austin. According to the Washington Post, campus protests against the law occurred at the University of Texas at Austin and concerts scheduled at the campus were canceled because the proposed law.

One mother of two students attending MISD told the local ABC affiliate KSAT 12 that, “Schools have been a target for – for lack of a better word – crazy people,” and that she was “perfectly fine with” MISD teachers being trained and prepared to conceal carry weapons.

Medina residents also agree. KENS 5 interviewed attendees at a Medina High School football game in 2016 about the proposed legislation. Those interviewed overwhelmingly supported the MISD program to arm staff. One man said, “I think it’s a good idea. I have no problem with our teachers being armed.”

A women in the stands agreed, saying, “I thought, ‘Well, it’s good that our kids can be protected.’” Still another, that students should be protected despite the politically incorrect media purporting anti-gun rights. She said, “I think you’ve got to do whatever you’ve got to do.”

MISD Superintendent Penny White told KSAT 12, “We don’t divulge anything about our safety plan because it would compromise the plan. You never know if there’s a transient or someone who has zeroed in on harming a child.”

Armed staff and teachers acts as a successful deterrent in a rural area that is roughly 20-25 minutes by car from the nearest law enforcement office.

Interested in more news from Texas? We've got you covered! See More Texas News
Previous Article Now They’re In The Louisiana House Voting On Whether To Raise Your Taxes
Next Article Yes People Are Selling Alligator Heads …