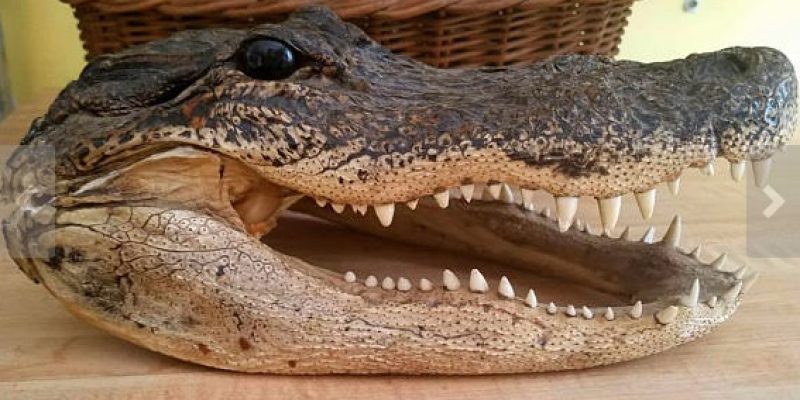 This week, Texas game wardens cracked down on poachers illegally selling — wait for it — alligator heads. (A quick Google search reveals that alligator heads can even be purchased on the craft site, Etsy.) Why anyone would want an alligator head is a mystery, but they sell for roughly $25 per head.

A Wild Web crackdown in the Dallas Metroplex led to 18 citations for roughly two dozen online sellers of illegal wildlife, and criminal charges against individuals who attempted to sell various threatened and protected wildlife species online.

This covert wild web operation came after a successful crackdown in Houston last May.

Game wardens surveyed internet forums and online marketplaces to identify where and what was being traded online. For sale were wildlife and wildlife parts, including a taxidermied great blue heron, raptor talons, American alligator heads and live box turtles. They were also trying to sell state and federally regulated natural resources, the Texas Parks and Wildlife Department stated in a press release.

The illegal sale and exploitation of wildlife resources is a global problem that has a direct negative effect on the State of Texas and could lead to the loss of Texas native species, either through the harvest of native species or introduction of non-indigenous invasive species. Wildlife trafficking online is a major problem and we want to send a message loud and clear that it will not be tolerated.

During the Dallas operation, game wardens uncovered uncover illegal items for sale in 20 cases, which led to the seizure of numerous wildlife resources. They issued citations for the illegal sale and possession of threatened and or protected species, including:

All citations were class C misdemeanor violations with fines ranging from $25 to $500.

Federal laws regulate the sale of wildlife under the Migratory Bird Treaty Act; the Endangered Species Act (which bans the interstate or international sale of listed species and most of their bi-products); and the Marine Mammal Protection Act (which limits the sale of most marine mammal parts and products, excluding Native Alaskan made).

The Department is urging the public to notify wardens at Operation Game Thief (800-792-GAME) about possible illegal online wildlife trade activity. A list of game warden offices can be found here.