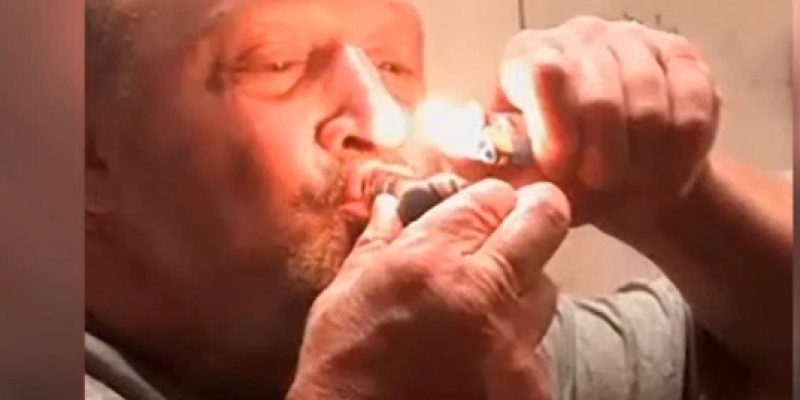 Hilarious and despicable: Lumberton Police Chief Shane Flynt was caught smoking marijuana and bragging about it. First, he was suspended without pay after a video surfaced online that his “very vindictive” wife recorded.

In a video obtained by WDAM Flynt is wearing his uniform and “babbling incoherently and puffing on a broken pipe — saying ‘I’m the only chief of police in Lumberton that likes to smoke weed.'”

Christmas music can be heard in the background and it appears that Flynt is inebriated. At one points he remarks, that he likes “Rudolph the red-nose reindeers” and “laughs maniacally” about being a law enforcement officer high on dope. He bragged:

After the video surfaced, Flynt posted a statement on Facebook admitting that he trusted the wrong person (his wife) and that he made a “huge mistake.”

Flynt said, “There is no excuse. I pray you all find it in your hearts to show me grace and know that I am truly sorry for this incident.” But then he also asked, “where would we all be” if hidden cameras were placed in everyone’s homes?

Meaning, lots of people do things they aren’t supposed to do. Is this really an apology?

Lumberton Mayor Quincy Rogers said Flynt was sent home after he saw the video and would remain suspended until the city’s board of aldermen could meet. He told WDAM, “That’s quite disturbing. I’m still trying to get over this video.”

On Feb. 19 Flynt submitted his resignation, but it was not accepted. The Lumberton Board of Aldermen voted unanimously on Feb. 22 to reinstate Flynt.

One board member told WDAM that “Everyone in life makes mistakes,” and that he supported Flynt and the board wanted to give him a second chance.

Does that mean that everyone in Louisiana arrested for smoking dope gets a second chance too? What about marijuana dealers and smokers in jail? Will they get released?

On March 5 Flynt submitted a second resignation one day before the Lumberton Board of Aldermen were scheduled to meet to again discuss his termination. The aldermen met on March 6 and voted to accept Flynt’s resignation, effective immediately.

Mayor Quincy Rogers told WDAM, “I was just thinking in the public’s eye, perception is everything. We as councilmen, mayors, police whatever the case may be, department heads, we are held to a higher standard.”

Will Flynt be arrested and charge with possession?

Why did it take the aldermen so long, and two board meetings, to fire a police chief bragging about smoking pot? Their job is to enforce the law by holding elected and appointed officials accountable.

It seems that a lot more is wrong with Lumberton County than just the police chief.

Interested in more national news? We've got you covered! See More National News
Previous Article Join Us For The Hayride’s Truth And Consequences Tour Stop In Covington March 28!
Next Article BATISTE: Mitch’s Grand Plan Is Only Self Serving