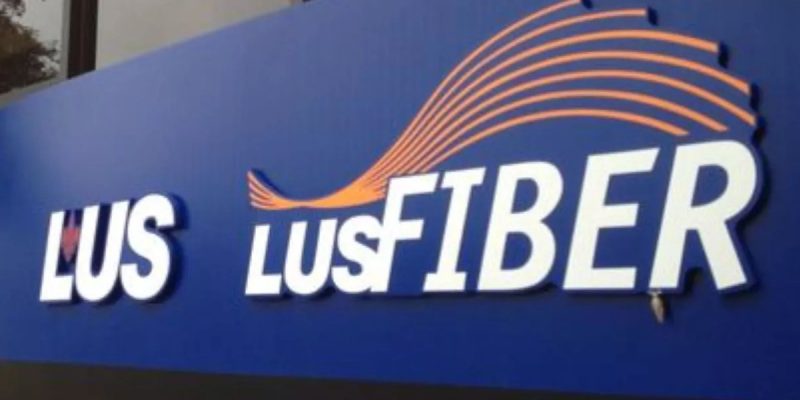 A number of years ago, micro-payments were all the rage online. The theory is, if enough people give just one dollar a month for a smart idea, its inventor could become a millionaire. It’s also similar to a strategy that some companies employ. Depending on how big their customer base is, increasing the rate just one dollar could mean millions in new revenues. If it works on just one dollar, imagine increasing it by two, four, or six. There’s also a built-in advantage to this strategy: small increases in monthly bills, even if noticed, generally go unchallenged because of the effort it takes to complain. The trick is to find and stay just short of the tipping point.

This strategy may be used by profit-makers across the globe, and it turns out governments are also getting in on the action. Gone are the days when governments can only raise revenues through raising our taxes. Tax increase fights involve a messy political process which plays out in the newspapers and on the evening news. The process upsets voters, who then work to upset their legislators. The process of winning or losing often depends on how many irate constituents get involved. That’s the way government is supposed to get revenue.

But what if a government owned an enterprises that could employ strategic price increases to grow government revenues? What if such an organization had control of some of its operational expenses – could it increase them to justify rate increases? Would rate increases resulting from higher operating costs require the vote of the people or their representatives?

We won’t need to travel far to test the hypothesis. We can simply look at the government-owned Lafayette Utilities System (LUS) in Lafayette. 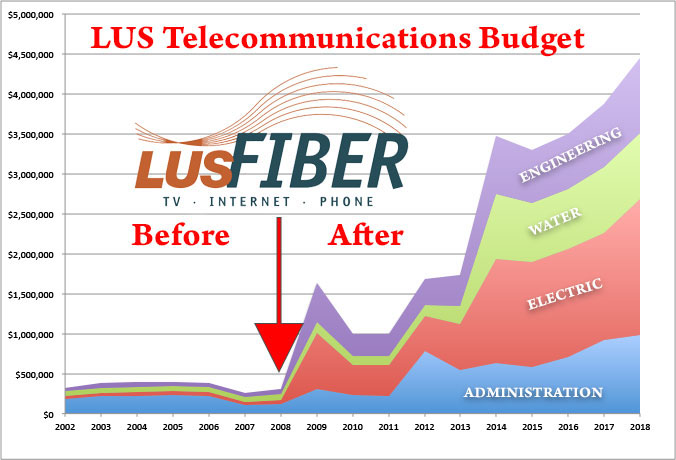 An average of water, sewer, and electric customers in Lafayette is about 57,000. If we use that number to work out the math on that $4,142,184 cost increase, each utilities customer would only have to come up with $2 on each of their monthly electric, water, and sewerage bills. Who is going to take the time to call and complain about a $2 increase?

Four and a half million dollars is a pretty big number. How does that break down by department? Let’s start again way back in 2008 before LUS Fiber took over LUS’s Electric Operations Substation Communications department. At that time, they had a telecommunications budget of just $2,440 a year. The next year, LUS Fiber’s no-bid contract increased the price 122 times to $300,544. Fast-forward nine years to 2018, the budget is now 226 times larger at $553,548! If we divide that number by LUS Electric’s 68,240 customers and again by 12 months, each customer would only need to contribute $0.68 per month to cover the higher expense.

Another department, Electric Operations Energy Control, had a telecommunications budget of $13,455 in 2008. The next year it jumped 26 times to $367,966. The adopted telecommunications budget for 2018 is $568,216, or 41 times what it was just ten years ago. The per-customer math works out to just $0.69 per month. It’s another nickel here and a dime there, but so far, just these last two department increases have added more than a million dollars per year to Lafayette Consolidated Government’s bottom line.

There are so many examples. We could go look at Utilities Engineering Electric System Construction’s telecommunications budget of $730,150 (a 54 time increase), the Electric Transmission division’s $579,722 (a 41 time increase), Support Service Meter Services’ $238,201 (a 54 time increase), or any number of others. While these individual departments show us what’s contributing to that big $4.5 million number, they’re still pretty big numbers. Maybe a closer look will give us a little better insight into what’s really happening.

Before LUS Fiber took over LUS Wastewater (sewerage) division’s internet access, the annual telecommunications expenditure was only $25,037. No major changes occurred before that — or at least for any of the previous six years. Fast-forward to 2016, the latest year for which we can get actual expenditures, the Internet expense was $564,733. That means that over the last ten years, Wastewater has multiplied its Internet budget 22 times! The math on 44,269 Wastewater customers works out to $1.06 per month per customer. Would you call to complain about one extra dollar on your sewerage bill?

The natural question is what could justify these skyrocketing costs? Fortunately, we know what these telecommunications expenses are for because LUS’s Wastewater division was kind enough to provide their Internet billing statement from September of last year. Its total was $43,165.30 (yes, that’s just one month of Internet service) and the lion’s share of that was to provide Internet access to 100 separate locations that each pay $420 per month. The 12 month total works out to $504,000. A random check of about 40 of these locations revealed them to be Wastewater lift stations — effectively a pump and a pipe to move sewerage to the treatment plant. Ensuring the flow continues uninterrupted is important, so these stations are monitored remotely using a 30mbps LUS Fiber Internet connection.

For a quick price comparison, I pointed my web browser to LUS Fiber’s website, which shows 60mbps Internet that’s twice as fast for only $29 per month. Maybe residential and business Internet service isn’t a fair comparison, so I reached out to Sensaphone, a company that specializes in remote monitoring of all kinds of things including Wastewater lift stations. Their solution would use an industrial strength, wireless cellular phone connection —  and it costs 94% less than LUS Fiber charges. So, if we switched from LUS Fiber’s $504,000 per year to AT&T or Verizon, it would reduce this expense to $30,000 per year. Even if we paid the full retail price for 100 brand new industrial cellular devices, it would only add a cost of $170,000 for the first year. We’d still save over $300,000 the first year, and $474,000 per year after that.

Here’s one of the wastewater stations in question. This one is located at 203 Ramblewood Drive in Lafayette. 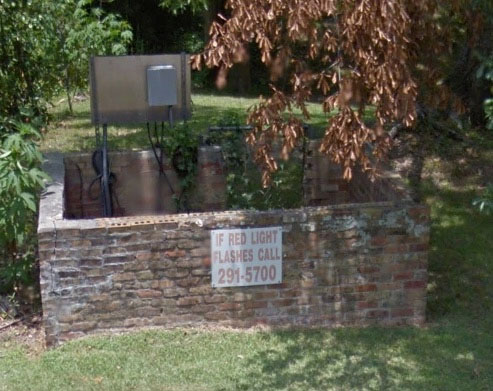 Does LUS utilities control its operational costs for Internet service? Yes. Did it significantly increase the price it pays for Internet? Yes. Have your rates for power, water, and sewer increased since 2008? Yes. Did you vote to allow LUS utilities to raise those rates? No.

What does all this mean? Although this $4.5 million going to LUS Fiber does not include other departments’ Internet services (like Fire, Police, Parks, Public Library, etc.) it’s still sufficient enough to call into question LUS Fiber’s claim of “cash positive” status of $3,245,869.

Another good question might be how much money does Lafayette Consolidate Government spend for their no-bid telecommunications contract with LUS Fiber? During an October 2017 meeting, as LCG started to rededicate LUS Fiber’s $960,000 annual ILOT (in lieu of taxes) payment right back to LUS Fiber as “new spending,” questioning by the council revealed that LCG spends about $6 million with LUS Fiber every year. If they successfully rededicate the ILOT, that number would grow to $7 million per year. The purpose of that ILOT, by the way, was to level the playing field with private sector Internet service providers that are required to pay taxes because LUS Fiber is not required to.

Even with these efforts, the 2016 audit, the latest as of this writing, mentions that the organization’s running negative balance and liabilities combine to keep LUS Fiber in the red by $201,426,839.