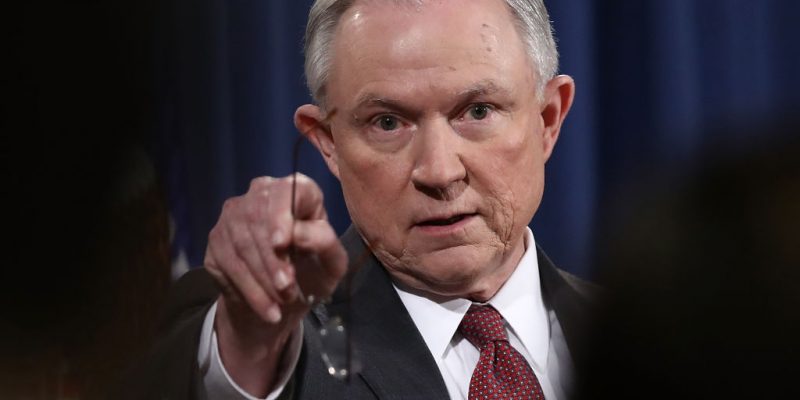 According to investigative reporter and Fox News correspondent Sara Carter, Jeff Sessions has finally made a big move today. While the press focuses in on the story that the Attorney General declined to appoint a second special counsel at this time, bigger news is happening that isn’t being covered.

As we mentioned previously, the Inspector General of the Department of Justice has been investigating misconduct in the FBI and DOJ since President Obama asked him to review the matter following FBI Director James Comey’s decision to reopen the Hillary Clinton email investigation only days before election day. That investigation has now spanned from the end of 2016 to the present day, and the report is due to be released very soon. All reports are indicating that this report by Inspector General Michael Horowitz is set to be explosive, and it’s already taken one preliminary casualty: the pension of former Deputy FBI Director Andrew McCabe.

Given all that has happened recently with the misconduct at the FBI, the DOJ, and with the FISA courts, it’s no surprise that everyone wants a second special counsel. It makes complete sense. The situation must be resolved, and these agencies must be held accountable for what they have done. They essentially undermined the justice system with the intent of reversing the results of a presidential election. However, the Attorney General announced today that at the current moment a second special counsel would not be appointed. It doesn’t mean that one will never be appointed; it just means that at the current moment, we aren’t legally in the position to have one.

However, that doesn’t mean that justice won’t be served.

While everyone was obsessing over the fact a second special counsel was declined, Sessions actually goes past that in the letter. He elaborates further on something that he had mentioned in an interview with Fox News’ Shannon Bream, where he noted that he had “appointed a person outside of Washington, many years in the Department of Justice, to look at all the allegations that the House Judiciary Committee members sent to us and we’re conducting that investigation.” At the time, it didn’t sound distinctive, but as it turns out, it is quite something. Many pointed out that this person would be ideal to pair with Inspector General Horowitz; the Inspector General does not have prosecutorial powers, simply investigatory ones. He can hand down criminal referrals; however, those criminal referrals require a prosecutor. Here is where this Sessions-appointed prosecutor would come into play.

Today, we discovered who that prosecutor is. John Huber, the United States Attorney for the District of Utah, was appointed by Sessions to work in tandem with the Inspector General on his investigation of misconduct at the FBI. This confirmed what Sessions had mentioned to Shannon Bream back at the beginning of March. Then, Sara Carter appeared on Hannity last night with some very interesting information.

For those who aren’t acquainted with Ms. Carter, she is the reporter that broke the story about the FISA scandal, about the memos, and she has broken major stories regularly ever since. These stories have been spot on, and that’s why I’m choosing to report what she noted tonight.

Ms. Carter stated that through her sources, she learned multiple things. First, another special counsel was absolutely not being ruled out. That much was a point of confusion for many. Second was that Huber has been working with the Inspector General since the fall. This was bombshell number one of her report; if these two have been working together since the fall, how much have they gotten done together? How has this remained so quiet and low to the ground, other than the fact that the mainstream media hasn’t wanted to touch the story of corruption in the DOJ and FBI with a ten foot pole? However, her final claim was the one that’s really noteworthy: Horowitz has already handed down criminal referrals. She didn’t say who, but the fact that those referrals have been handed down shows the seriousness of the investigation and how explosive the report will be once released to the public.

And to those worried still about the special counsel, understand this: there are special qualifications that must be fulfilled prior to the appointment of a special counsel. According to the letter that was delivered to Representatives Bob Goodlatte and Trey Gowdy, and Senator Chuck Grassley, “the Attorney General may conclude that the circumstances do not justify such a departure ‘from normal processes of the Department,’ and that he may instead determine that other ‘appropriate steps’ can be taken to mitigate any conflicts of interest.” In this case, instead of completely starting over by appointing a brand new special counsel from outside the DOJ, Sessions instead outsourced the prosecutorial portion of the special counsel’s powers to the U.S. Attorney in Utah. Consider this: for this particular investigation, why would Sessions appoint a special counsel when Horowitz, as the IG, has already amassed 1.2 million documents in his investigation and has the power to make criminal referrals? Why would he appoint a special counsel that would be undoubtedly attacked on their reputation by the left on the simple fact that Sessions appointed them? Horowitz is an Obama appointee. He was even attacked by Trump at one point, which puts the Dems in between a rock and a hard place. They cannot criticize him, because they defended him when Trump attacked him. However, they certainly want to attack him because he’s exposing them for their corruption after being stymied by them for years. Therefore, it makes perfect sense to effectively make a special counsel in between Horowitz and Huber; it ensures that the two can do the work of a special counsel while operating quietly without partisan attacks being lobbed at them.

However, it cannot end there. The call for a second special counsel must be listened to, something that Judge Jeanine Pirro, Gregg Jarrett, and Sara Carter all hit on in the most recent episode of Hannity. The newly announced duo can only go so far; at some point, their jurisdiction stops, as does the statute of limitations on multiple charges. This is when Sessions needs to appoint another special counsel. The logical point in time for that is when the OIG report is released. Keep in mind as well that Horowitz just opened another investigation into the FISA abuses; hopefully that one won’t take nearly as long. This arrangement is likely something that was intended to speed up the process, and it’s probably temporary.

I know that it’s disappointing that we aren’t getting a second special counsel right now. But Huber’s appointment (apparently as early as last fall) is much bigger than what it seems. We’re finally effectively getting a special counsel between him and Horowitz. They are working, and we have confirmation of that. Now, we wait and see what comes next. We wait for justice to be served; we wait for the report, and hopefully, for yet another special counsel; and we wait for the ridiculously slow legal process to work. In the meantime, I strongly urge each and every one of you to read the full text of Sessions’s letter to Gowdy, Grassley, and Goodlatte. Read for yourselves what he said, and don’t mind the media.