This is one of the more obvious own-goals we can remember seeing when it comes to the John Bel Edwards administration, and that might be saying something given some of the obvious lies, obfuscations and dumb moves they’ve made lately. But what drives it isn’t all that remarkable – it’s a pattern of doing everything they can to cast the Republicans in the House of Representatives as “obstructionists” for suggesting things other than tax increases as means to solve the state’s budget problems.

At some point, as goofy as Edwards’ people are getting, it’s going to start to become apparent that they’re a bit more interested in raising taxes than balancing the budget.

To wit, yesterday we had a post noting that all of the howling you’ve heard about the state’s “fiscal cliff” and the supposed billion-dollar budget deficit with which Louisiana is faced is basically just noise – the governor has a duty to present a balanced budget to the state legislature every year, and Edwards did just that to the Joint Legislative Committee on the Budget in January. Now – the budget that Edwards and Commissioner of Administration Jay Dardenne brought to JLCB was they said, a terrible document they considered to be a disaster for Louisiana, and there were the usual doomsday items in it like eliminating the TOPS program and the NOW waivers and so on, but the budget was balanced.

This is an important point, and one we wanted to reiterate so that any discussion we have of the budget debate is had on the basis of reality. It’s important to understand that we’re not talking about budget cuts amid this discussion; we’re talking about how to free up money to restore the cuts the governor made and therefore improve the crappy budget he sent to the House of Representatives.

And in that post, we noted a letter that Lance Harris, the Alexandria Republican who heads the House GOP delegation, sent to Dardenne suggesting that since the state currently is sitting on $152.7 million in surplus from the current fiscal year, a good idea would be to apply that money to items in the Edwards/Dardenne budget which are not recurring budget items – and by doing so, shrinking the budget deficit for the 2018-19 fiscal year without necessarily making a hole in future budgets. 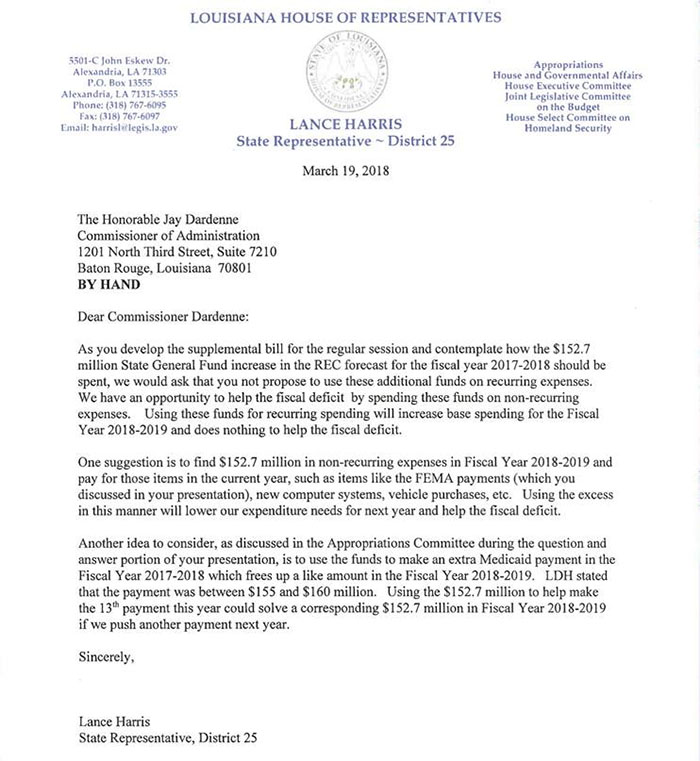 You’ll notice that toward the bottom of that letter Harris mentioned that one use of the $152 million might be for the state to make a monthly payment to its third-party Medicaid providers in the current fiscal year rather than next year. Doing that would save a future budget, maybe even next year’s, $152 million toward the $155-160 million those monthly payments typically amount to. Harris’ suggestion – it’s not the only suggestion in his letter, but it’s one of them – is to kill the payment now and, if necessary, leave a 2018-19 payment off for the 2020 fiscal year.

There is a history here, because among the financial tricks the Jindal administration used to skate past its frequent budget snafus was that one year toward the end of his second term Jindal skipped a monthly Medicaid payment in order to bring the budget into balance. To the best of our understanding the state never did catch up on that payment, which is a bit surprising since when Edwards took office he made a big deal about how skipping that payment was a sign of what a mess Jindal had made of the budget.

He wasn’t wrong then, but not actually cleaning that issue up when he was busy growing Louisiana’s budget from $25 billion to $30 billion seems like a dead giveaway that his budget management skills essentially mark him as Bobby Jindal with large tax increases.

So 10 days ago, Dardenne was in front of the House Appropriations Committee, and Rep. Bob Hensgens (R-Gueydan) brought up the subject of using the current year’s surplus to kill off that lingering Medicaid provider payment rather than to push it into the 2020 fiscal year as the governor’s proposed budget discusses. And here was Dardenne’s response…

So you’ve seen Harris’ letter where he makes the suggestion to kill that payment off now. Here’s Dardenne’s response to Harris, wherein it would seem the Representative was suggesting human sacrifice as an instrument of fiscal policy… 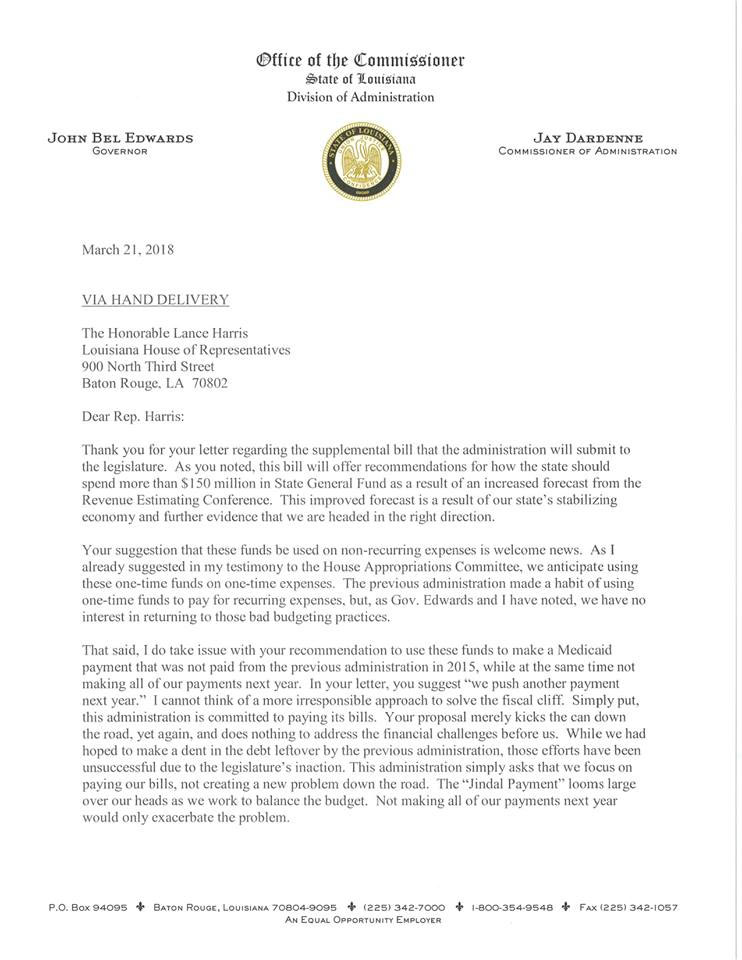 Are you getting what complete gibberish that last paragraph is?

Go back to the video from the Appropriations Committee, where Dardenne is asked about making up that Medicaid payment rather than pushing it into 2020. He confirms that the governor’s budget proposes to leave that payment outstanding for the current year’s budget.

Leaving that bill unpaid, in other words.

And when Hensgens suggests killing off the outstanding balance this year, while the state has the money to do it, Dardenne agrees that the state could do that.

Meaning that using this year’s money to clean up that debt is fine.

Until when Harris notes that if the state were to do that and then leave another payment off to 2020, which would put Louisiana’s overall budget picture in no worse shape than it is now, and more importantly no worse shape than it is under the budget proposal Edwards and Dardenne sent to the state legislature, it would be a way to shave $152.7 million off the “fiscal cliff” Edwards and Dardenne are so militant in saying is a crisis.

At that point it’s not fine.

And Dardenne’s justification for huffing and puffing about Harris’ suggestion is that he wanted to clean up that payment but for the Legislature’s “inaction” – which, in English means a refusal to raise taxes in an amount sufficient to Edwards and Dardenne’s preferences. They’ve allowed that money to stay unpaid since taking office in 2016 and now he says paying it off this year with money the state has laying around and then leaving a payment out in the 2019 budget would be kicking the can down the road…when their position is to leave the same payment from 2015 out there and using the currently available funds on something else.

You could defend Dardenne’s position if it was to make the Medicaid payment now and then pay all of them next year, thus finishing the 2018-19 fiscal year with no Medicaid money outstanding. That would be a defensible position. But it’s not his position. His position is to leave a payment outstanding and not make a payment now. That’s a position which makes sense a couple of different ways but is most understandable as the position of someone who insists on maximizing next year’s budget deficit so as to justify the need for the largest possible tax increase.

Which is what Edwards and Dardenne have been going for all along. Make no mistake about it. Dardenne unwittingly exposed that with his hyperventilating letter.

And we now know that nothing – nothing – the House Republicans propose as a means of lessening the “crisis” the governor and his chief budget lackey have been bemoaning since late last year will be accepted or even considered in good faith. Only a surrender on tax increases will be accepted. That’s where we are.

And it’s where we’ll be until this governor and the rest of his administration are long gone from the Fourth Floor of the state capitol.

Interested in more news from Louisiana? We've got you covered! See More Louisiana News
Previous Article We’re A Week Away From The Northshore Stop On The Hayride 2018 Truth And Consequences Tour. You Should Get Your Tickets Today.
Next Article They’re Making A Big Deal About Eric LaFleur’s Drinking-License Bill, But It’s His Other One You Should Care About