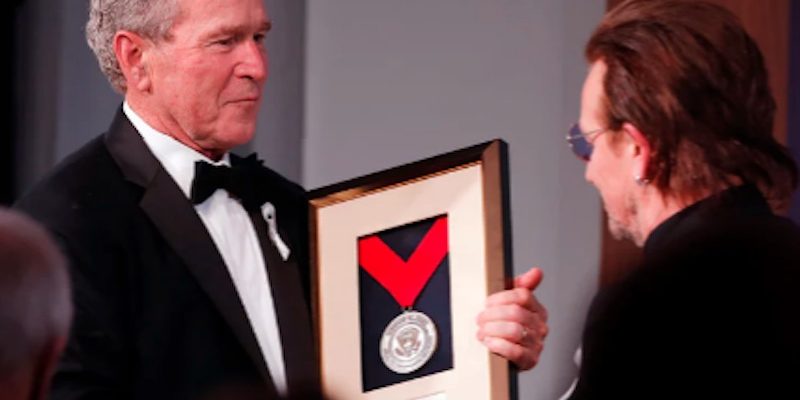 Bono, the lead rocker for the Irish band, U2, (aka Paul David Hewson) was the honored guest of former President George W. Bush, at a gala that was part of the Bush Presidential Center’s first Forum on Leadership Thursday night.

They met more than one decade ago, and took the stage last night to discuss battling preventable diseases like AIDS in developing nations as both a moral imperative and national defense strategy.

Condoleezza Rice, Bush’s former secretary of state, spoke earlier, calling the pair “the odd couple,” and recalled how she helped introduce the “tough-talking former governor of Texas” and “Irish rocker.”

Bush presented Bono with the first George W. Bush Medal for Distinguished Leadership, recognizing his high-profile humanitarian efforts and leadership. Bono founded the (Red) campaign, which focused on corporate donations to help raise money for HIV and AIDS primarily in African countries where the virus has had the widest impact. More recently, Bono founded the One Campaign, which focuses on ending extreme poverty and preventable diseases through global advocacy.

At the event, Bono emphasized that he wanted to highlight Bush’s effort to fight AIDS in Africa. He said, “life-saving medications have been the ‘best advertisements’ for the U.S.”

He pointed to Bush’s leadership by creating the President’s Emergency Plan for AIDS Relief, or PEPFAR, which has earned bipartisan support.

Bono also paid tribute to the late Barbara Bush, describing her as “the mother of PEPFAR,” because of her role in helping to de-stigmatize AIDS. She once held a baby with HIV, Bono said. And another time, when a man with AIDS challenged her to embrace him, she did.