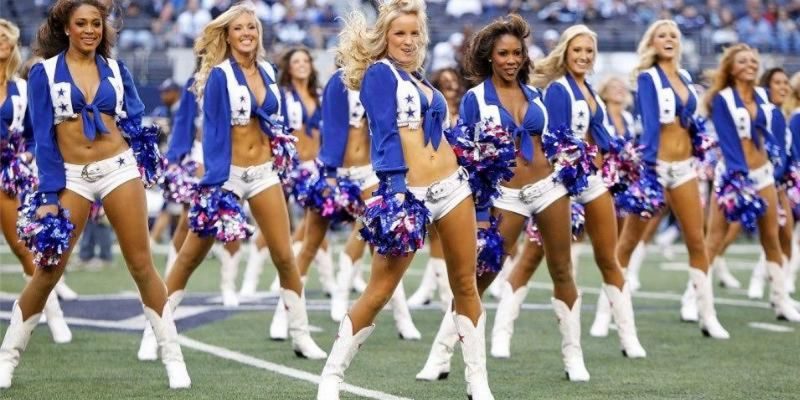 Have you seen this mind-numbingly stupid column from USA Today sports columnist Nancy Armour calling for the end of cheerleaders for pro sports teams?

If you haven’t, here’s just a little bit of that…

The underlying premise of NFL cheerleaders is degrading, presenting women as nothing more than objects to be leered at. With skimpy, suggestive outfits as their “uniform,” their only purpose is to titillate.

It’s always been an appalling message to send and, in this #MeToo era, there’s no longer any place for it. NFL cheerleaders need to go. NBA dance squads and NHL ice girls while we’re at it, too…

Proponents will say that most women who are NFL cheerleaders are professionally trained dancers who just want the opportunity to do what they love. That they play an important role in maintaining the team’s positive image with promotional appearances and community service.

All of which is true…

But that isn’t the real reason 26 of the 32 NFL teams have cheerleaders, and everybody knows it. They’re there to be eye candy, blow-up dolls come to life.

Why else would the Dallas Cowboys mandate that women wear sports bras and hot pants for try outs – “No tank tops or bike shorts” – and include “personal appearance” and “figure” as criteria on which they are judged?

That’s because for half the season at those places the cheerleaders would be on the field dressed up like eskimos. And yes, that cuts into the sex appeal cheerleaders can offer, but what’s more to the point is arctic gear doesn’t exactly lend itself to great dance moves. When having cheerleaders on the sideline becomes a waste of time after Nov. 1, there’s no point in paying people for that job.

Armour quotes Giants owner John Mara preening about cheerleaders as sex objects eight years ago, but doesn’t note that Mara has less of an issue with his nieces Kate and Rooney Mara regularly appearing in movies as sex objects (which is not a slam at either, who are fine actresses).

Armour whines that if you go to the Houston Texans’ website and look at the bio pics of the cheerleaders there are head AND CHEST shots you can see – and the cheerleaders don’t have biographies posted like the players and coaches do.

Which seems perfectly appropriate, particularly given the supposed concerns Armour has for the cheerleaders being abused as sex objects by evil men wishing to ogle them. She doesn’t seem to notice that if NFL teams with cheerleaders whose roles are solely to provide sex appeal for male fans were to provide biographical data making those cheerleaders more available to the public they’d be increasing the risk those cheerleaders would be stalked by the creeps she thinks the whole project of having cheerleaders is in service to.

It’s a lot of convoluted thinking, and it’s what you get when you allow and encourage people of limited intellect to hold themselves out as cutting-edge thinkers. Nancy Armour fits well within that category – she after all couldn’t stop gushing with praise for the September 2017 #TakeAKnee stupidity which cost the NFL a good quarter of its fan base. Anyone with even a remotely well-functioning brain could see that having players disrespect the national anthem in defense of street criminals would play poorly with the fans, and yet Armour wrote that up as a latter-day Birmingham Bus Boycott.

And then there was the column Armour wrote trashing Tom Brady for having a friendship with Donald Trump in the wake of Trump’s Middle East immigration ban, and suggesting Brady model himself after Colin Kaepernick. That idiocy earned Armour a Golden Jackass award from MRC TV.

It’s exceptionally irritating to see leftist partisans put in position to lecture us about sports. It would be one thing for Armour to be a social justice warrior who managed to stay in her lane and talk about balls, strikes, three pointers and screen passes – but that’s not what social justice warriors do, is it?

At the end of the day it’s not Nancy Armour’s fault that she’s shooting forth stupid screeds like the one this week trying to ban cheerleaders for pro sports teams. It’s the fault of the editors at USA Today. They’re the ones who make the decision to publish crap like what Armour writes. And if that paper’s circulation goes the way of the NFL’s fan base in the wake of social justice activism disguised as sports coverage, well, that’s fine with us.

If the problem with NFL cheerleaders is that they’re being objectified by men, shouldn’t we also be shutting down strip clubs, Hooters restaurants, modeling agencies, Victoria’s Secret stores, and so-called men’s magazines? For decades there have been sincere people on the right who have warned that all of these things were a net-negative socially for both women and men. They were generally ignored by the ‘it’s just sex, don’t be such a prude’ left whose mantra was that so long as no one was being coerced or acting against their will, adults should be free to do what they want. That was, I thought, the feminist position as well. Women should be able to make their own choices and not be “slut-shamed” or harassed if they choose to dress or act sexy. Is the author of this piece slut-shaming NFL cheerleaders?