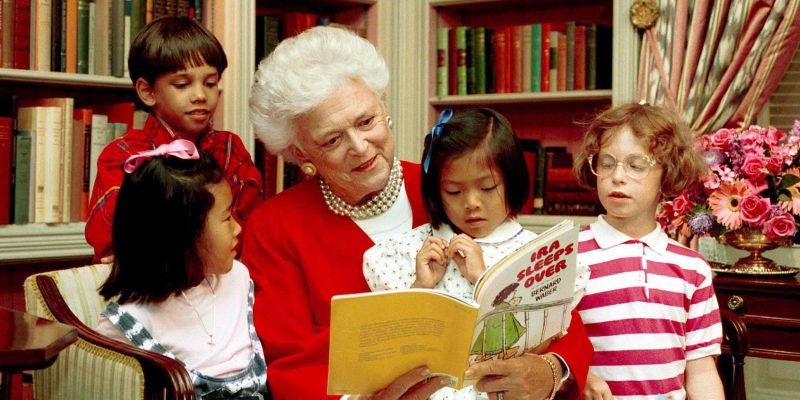 After former First Lady Barbara Bush died, North Texans are still showing their love for the Bush family. Families with young children haven’t stopped coming to pay tribute to the woman who advocated for early childhood education at the George W. Bush Presidential Center in Dallas.

The flag is flying at half-staff outside the Bush Center; inside, a memorial is set up where mourners are able to leave their condolences and memories of Mrs. Bush.

“I think she was an outstanding lady, integrity, character. She had an amazing life,” said Maricia Granberry, who came with her six-year-old daughter, told the local NBC News affiliate. “Sadie goes to Solar Prep Academy and each of their classrooms has a namesake and one of the classrooms there is named after Barbara Bush… I thought it was really important for her to learn to show respect and I thought it was really important to bring her here.”

In his opening remarks, President Bush said, “I thank you for wearing the ribbons, and I thank you for your prayers and support. I hope you don’t feel sorry for any of us, particularly me.  I am at peace with what took place and the reason why is my mother was at peace. She believes in an afterlife and was joyously looking forward to that afterlife.”

“To kick-off Forum on Leadership, I thought it would be important to celebrate the strength of women leaders. And, I couldn’t talk about women leaders without mentioning my mother-in-law. Barbara Bush was the strongest of leaders, she led with with grace and quick wit. Watching her I learned how to be a first lady, and I am so grateful for her example.”

Interested in more news from Texas? We've got you covered! See More Texas News
Previous Article Nationwide hunt ends in Texas after woman flees to Florida to kill her doppleganger after killing her husband
Next Article USA Today Runs The Dumbest Op-Ed Of All Time…In Its Sports Section