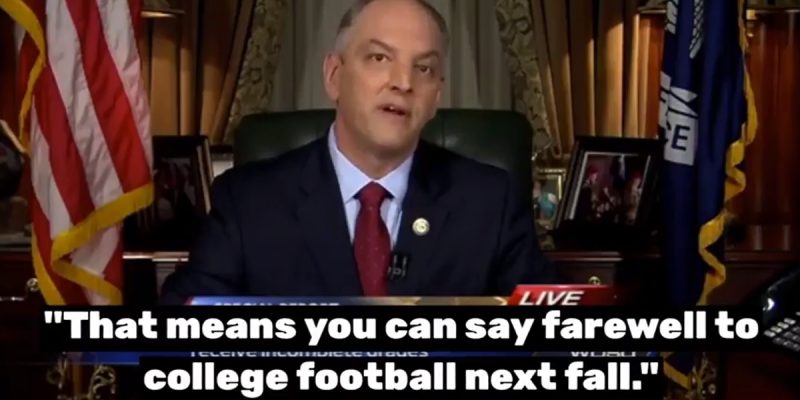 …though it’s unlikely that evidence is going to manifest itself in an especially public way just yet. The chief intended recipient of what the delegation has been putting out in its twice-a-week video updates on the current legislative session, that being Gov. John Bel Edwards, has remained more or less unchanged in his statements – he’s continuing to bash the House Republicans with all the same language he’s always used.

But we’ve heard from a couple of sources that Edwards has hit the ceiling after a couple of those video updates this week.

Here was the first one. It hit the web on Wednesday…

The delegation has a really good message here, one which was inevitable given the circumstances. First of all, given 15 years of non-stop projections by the Revenue Estimating Conference which were horrendously, comically inaccurate, Louisianans paying attention to the never-ending forecasts of fiscal doom can’t possibly take any of them seriously anymore, and yet fiscal doom in the absence of taxes is the only language John Bel Edwards knows. Three years into his term, this makes him ridiculous – and the delegation is now recognizing the opportunity to ridicule him.

Edwards is not someone who takes well to being ridiculed, and he’s anything but oblivious to what’s being said about him. That video circulated at the Capitol quite a bit and we’re told it more or less set off the sprinkler system on the 4th Floor when the governor saw it.

Then yesterday the delegation was back with another video…

HB 760 was a bill brought with what had to be the sole intention to show up the governor and his staff, and specifically Edwards’ narrative that it was incumbent on the House to come up with budget cuts to obviate the need for his tax increases or else they were the irresponsible ones at the Capitol. That bill was never going to pass, and especially not in the House and Governmental Affairs Committee which has a bare 6-5 majority of Republicans but one of whom is Rob Shadoin – who defines the term RINO, particularly with respect to his allegiance to all things Edwards.

Morris pulled the bill once Shadoin began speaking against giving the House access to the same budget information the governor gets, which made it obvious there was a majority against it.

But Morris, in going down to defeat, got to inflict a fairly massive shot on Edwards and his “you people should bring me the cuts” narrative. Because as members of the delegation will tell you again and again, they don’t get access to a level of detail with respect to the state’s budget that would allow them to take a deep, granular dive into government spending to root out waste. The executive branch has hid that ball for decades, and Edwards’ administration might even be worse than its predecessors. So when the governor challenges the House to come up with “responsible” fiscal restraint, from now on the response is going to involve the death of HB 760 at his hands.

The general public isn’t in on most of this, and for certain none of the state’s legacy media organs reported on it. But eventually that’s going to change because the delegation is actively working to get the word out about what’s actually going on at the Capitol beyond bestiality bills and other “cotton candy” issues.

Edwards doesn’t like that, because he knows he’s only in that chair on the 4th Floor because of cotton candy. It wasn’t a policy mandate which put him in office, it was hookers. He can’t have his statements exploded the way Morris and the delegation are busily doing, because when he does he’s going to find himself without much justification for re-election next year.