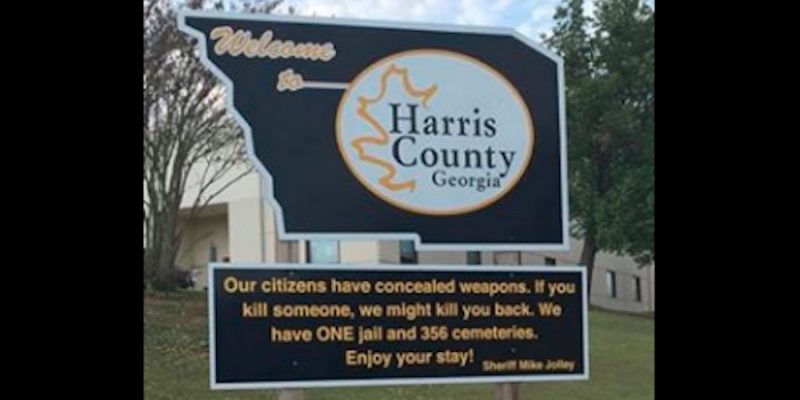 Harris County Sheriff Mike Jolley told the Washington Post that concealed carry permits have tripled in Harris County over the past several years.

He told the Ledger-Enquirer that he changes the signs that are posted outside of the Sheriff’s Office every seven or eight months. This one is another “politically incorrect” sign.

THIS SIGN IS REAL…Once again our local Harris County, Georgia Sheriff Mike Jolley sends out another loud & clear message about our citizens & you better believe this!

WARNING: Harris County is politically incorrect. We say: Merry Christmas, God Bless America and In God We Trust We salute our troops and our flag. If this offends you … LEAVE!

According to the local television affiliate station, WTVM, Jolley said that the sign– that he paid for himself–is meant to be “tongue-in-cheek.”

“It’s a way to say people in this county have a second amendment right and if someone uses a weapon, they’re likely in danger,” Jolley told the local Patch News. “Don’t do anything crazy. We’re likely to shoot back.”

Jolley told the Ledger-Enquirer that the reaction he’s received is overwhelmingly positive, roughly “98 or 99% supportive.”

“I think the sign speaks for itself,” he told Patch. “Citizens here have weapons and that’s legal. We’ve seen an increase in weapons sales. The citizens have a legal right to protect themselves and their property. If you come into our county and kill someone, you might get killed back. Weapons are a tool. They’re not intended for someone to use in a criminal act.”