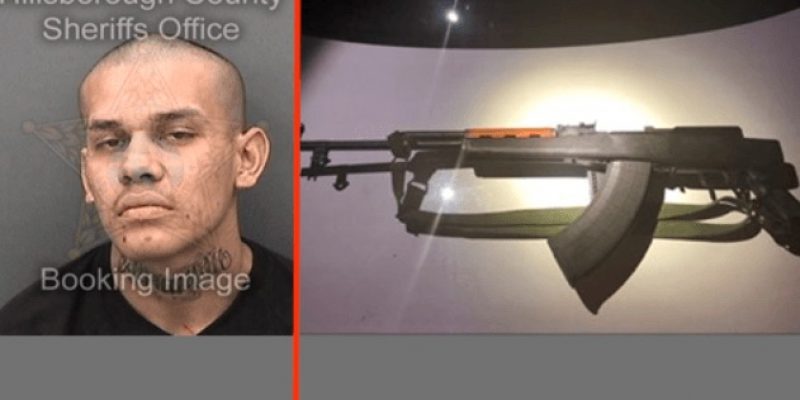 Raul Garcia, Jr., a U.S. citizen, previously convicted felon, and “certified MS-13 gang member,” was arrested in Hillsborough County, Florida, after he “allegedly brandished an AK-47 in the middle of a road in an attempt to stop traffic,” Breitbart Texas reports. Convicted felons are prohibited from legally owning or possessing a firearm.

Motorists called 911, reporting being threatened by a man waving around a rifle in the middle of traffic, yelling at them to stop, and jumping in front of cars. Deputies from the Hillsborough County Sheriff’s Office responded and when they arrived at the scene the ordered the man to drop his rifle. He didn’t. Instead he fled on foot towards a nearby wooded area.

A search ensued, including deputies with a K-9 and a county helicopter. They found a Norinco SKS AK-47 rifle and a green bag that Garcia had been carrying and dropped. The bag reportedly contained illegal drugs and ammunition including three baggies of crystal methamphetamine, four meth pipes, and five .38 caliber rounds, Breitbart Texas reports. Deputies eventually found the suspect the next day and took him into custody without incident.

Hillsborough County Sheriff’s Office spokesman, Corporal Larry McKinnon told Breitbart Texas “he believes the AK-47 is semi-automatic only. He said the rifle has not been reported stolen and his department has not yet determined its history or how a previously convicted felon came to possess it.”

According to court records Garcia’s criminal history includes a felony conviction when he was  a juvenile, which barred him from legally purchasing or possessing a semi-auto AK-47 rifle.

Here’s a question for law enforcement: why is a felon not in prison and why is he in possession of a fire arm illegally?