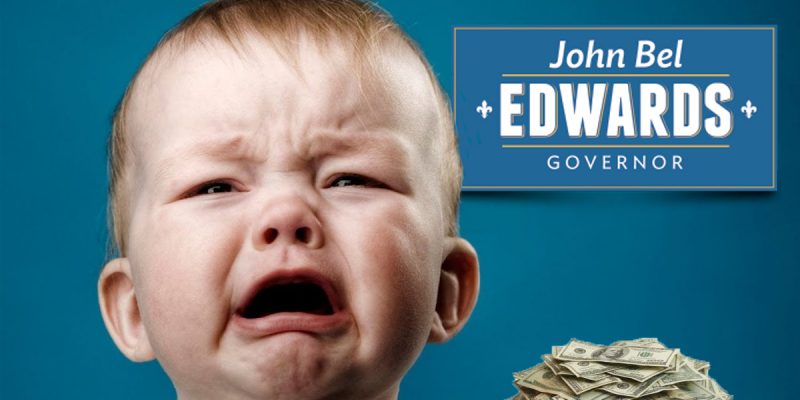 …over the passage of a budget which balances without raising taxes. Louisiana’s Governor John Bel Edwards says that the “Senate cannot fix this” because it’s too short of funding the state’s critical priorities.

In case you can’t see the video from Edwards’ Facebook page, here was WAFB-TV’s report on it with some of his remarks…

From his tone alone it’s quite obvious the passage of the budget was a sizable win for Louisiana’s conservatives. Edwards went all in trying to kill that budget in the House and failed, thanks to some intestinal fortitude on the part of some House members who knew they’d be coming in for retribution from a Fourth Floor fully willing to exact recriminations for “wrong” votes.

Edwards’ line was parroted more or less verbatim by his pals at the Louisiana Budget Project. That leftist organization’s director Jan Moller had the same hyperventilating tone, with some nearly-identical verbiage, upon the budget’s passage…

“The state budget that passed the House today does not reflect Louisiana’s values and priorities. It includes devastating cuts to health care, medical education, college scholarships and programs that support our state’s most vulnerable citizens.

“This budget cannot be fixed by moving money around. Lawmakers need to set it aside until they’ve reached agreement on a revenue package that addresses the fiscal cliff and provides the stability that students, patients and families across our state deserve.”

So now you know the demand from the Democrat side – which is to intentionally fail to pass a budget in the regular session. Their demand will be for the Senate to sit on the budget until the regular session is over, which the Democrats will now demand happen forthwith, and then go into a special session waiting for tax increases to pass through to the governor’s desk – tax increases which must originate in the House, by the way – before taking the budget up again.

This from the people who purport to run the state.

Bear in mind, this is a budget which, were it to pass as is, would rank in the top five richest budgets in Louisiana history. Edwards and Moller say it’s unworkable. That begs a question about the competence of the governor and his staff, and whether they have to administrative skills to run a lemonade stand much less a nearly $30 billion state government.

Frankly, it’s humiliating to have such a crybaby for a governor. The people of Louisiana elected Republican majorities in both the House and Senate, and poll after poll indicates there is no majority among Louisianans for tax increases.

Edwards presided over Louisiana being the only Southern state to actually lose jobs on net last year, and takes no responsibility for it. Instead he has his health department promote a ridiculous study claiming that Medicaid expansion is a huge financial boon to the state’s bottom line and Louisiana’s economy while acting as though a budget driven by a focus on the state’s fiscal reality is “unworthy of the people of Louisiana.”

It’s coming time for the people of the state to recognize Edwards for what he is. He’s the emperor with no clothes. He’s full of bluster, but empty of leadership and as devoid of honesty as he is managerial talent. If the House’s budget, which is closer to resolving the “fiscal cliff” than his on budget document was, where is his acceptance of responsibility?

The House Republican delegation held their own press avail in response, and they were a lot less bombastic than the governor…

Interested in more news from Louisiana? We've got you covered! See More Louisiana News
Previous Article UPDATE: They’re On The Louisiana House Floor Debating The Budget Today…
Next Article Nationwide hunt ends in Texas after woman flees to Florida to kill her doppleganger after killing her husband