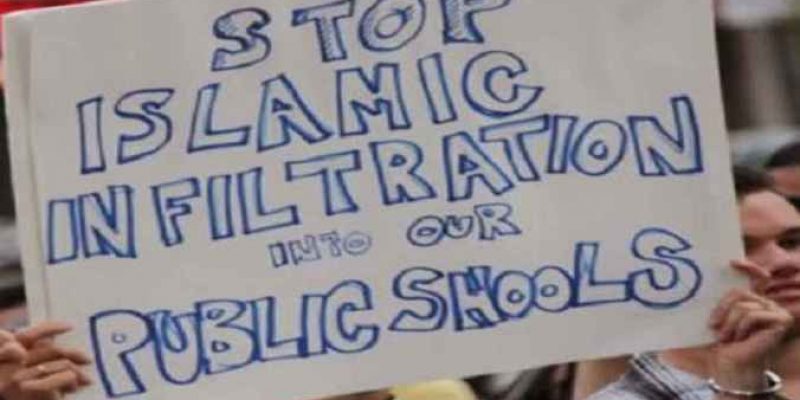 Islam is only a religion in as much as it promotes a totalitarian political ideology. Through terrorist organizations like the Council on American Islamic Relations (CAIR), U.S. public schools are teaching Islamic ideology to children– from kindergarten to adults in publicly funded colleges and universities.

After decades of lawsuits against public schools being sued for having a Judeo-Christian ethos (and not actually teaching Christianity), the Freedom Center’s David Horowitz argues, “Make no mistake about what the left is doing: They’re indoctrinating our children with pro-Islamic anti-Christian messages. And their goal is to tear down God and destroy our Judeo-Christian history and values.”

In a recent email to supporters Horowitz cites examples of Islam being taught in public schools. From New York school districts promoting an “educational” video for teachers to use (“Dying to be a Martyr”) in which Islamic terrorists explain why their attacks are justified, to schools in Florida (and Tennessee) teaching children how to create Muslim prayer rugs, or students in Maryland reciting the first principle of becoming a Muslim (and the first in the five pillars of Islam), the Shahada. Others, teach students to recite the Pledge of Allegiance in Arabic ending it with, “one nation under Allah.”

Horowitz rightly asks, “Do you think your tax dollars should be paying for this pro-Islamic liberal indoctrination?”

The petition will be sent to the U.S. Secretary of Education Betsy DeVos with a demand that no taxpayer dollars are used to teach Islam and that federal funds be withheld from school districts that do. A copy of the petition will also be sent to governors.

Public schools teaching Islam to indoctrinate Americans was first implemented in the late 1960s and is the partial focus of my second book in a series: What Every American Needs To Know About the Islamification of America, Book 2: Politics. The first in the series, What Every Christian Needs To Know About Islam, Book 1: Ideology, is set to be published next month.

For more information about Islam in public schools go here.