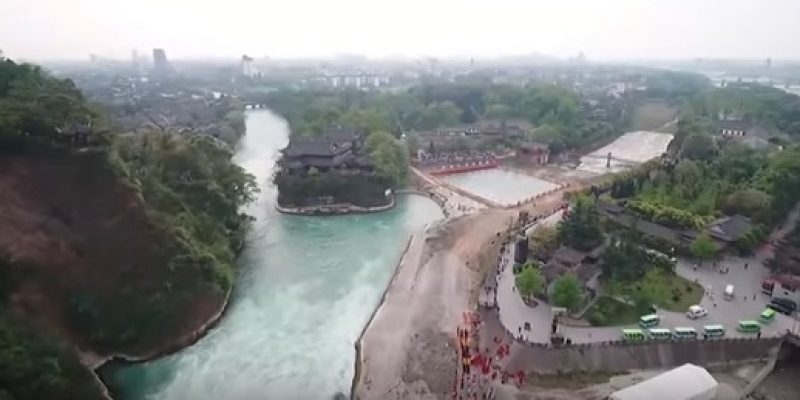 A festival in China celebrates an engineering genius of the ancient world who changed the course of a river—and history. For thousands of years, in China’s Sichuan province, a town has been opening its floodgates, the National Geographic reports. Its engineering feat is one that Houston could learn from, especially in the aftermath of Hurricane Harvey.

The ceremony is held at an ancient site at the edge of Chengdu, in China’s Sichuan province. It’s called “Dujiangyan,” which means, “dam on the capital city’s river.” But National Geographic writes that this “is a modest title for an undertaking of incredible scope.” It notes:

The great rivers of China helped the civilization flourish, but also brought devastation during years of severe flooding. In the third century B.C., Li Bing, serving the ruling Qin state, devised this system of weir works—levees, partial dams, and waterways—to regulate the flow of the Min River, the largest tributary of the Yangtze. Upriver from the Chengdu Plain rise the high Longmenshan—Dragon’s Gate Mountains. In springtime, meltwater pours down. By diverting part of the Min at Dujiangyan, Li Bing’s system prevented floods and provided consistent irrigation for farming.

At the Dujiangyan, the town celebrates an annual Water Releasing Festival, and participants wear traditional costumes honoring Li Bing. The celebration is part of China’s national Qingming Festival, which is a day when people celebrate and remember their ancestors.

Interested in more news from Texas? We've got you covered! See More Texas News
Previous Article 15 machete attacks every day in the UK, one every 90 minutes
Next Article Sign the petition: No Islam in Public Schools