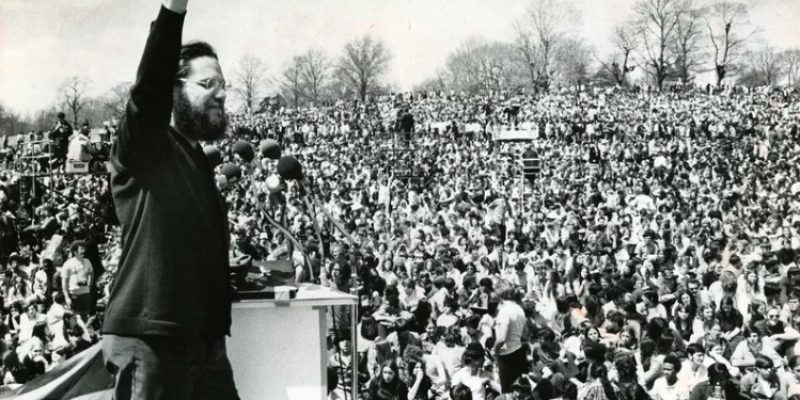 The media has perpetrated a lie for 48 years that the co-founder of Earth Day, is former Ivy League professor, Ira Einhorn, who killed his girlfriend and “composted” her body.

A photograph that was never researched, investigated, or questioned– of Einhorn standing at a podium in Philadelphia at the first Earth Day celebration in 1970– helped create the myth behind the movement.

TIME still describes Ira Einhorn as an “academic expert” on the counterculture movement during the 1960s and early ’70s, who taught at his alma mater, the University of Pennsylvania. TIME reported that Einhorn “once reportedly broke out the joints, stripped naked and danced in the classroom.” Harvard University paper, The Crimson, reported that he said, “a little more hugging could do Harvard a lot of good.”

However, the peace-loving hippie act– was an act. In reality, Einhorn was the “Unicorn Killer.” (His last name in German means one horn, or unicorn.) Eighteen months after his girlfriend Helen “Holly” Maddux was reported missing, the remains of her body were found in March 1979 rotting inside of a trunk kept in Einhorn’s home, thanks to a dogged Philadelphia homicide detective who pursued the case.

Einhorn claimed that someone set him up because of his antiwar activism. Rather than defend himself in court, he left the country days before the start of his trial in 1981. He was tried in absentia and found guilty of murder in 1993. After traveling around Europe for more than 15 years, he was extradited to the U.S. and eventually convicted in 2002 by a jury for the charge of first-degree murder. He was sentenced to life in prison.

However, TIME admits in an article published this year that it helped perpetrate the myth of Einhorn. Even after the photograph was published in 1970 and Earth Day founders contacted TIME, it still did not correct the false claims it made about Einhorn. TIME states:

When the murder investigation made news, that idea did too; TIME magazine was one of many news outlets that published the above photo and described Einhorn as a founder of Earth Day when covering the case.

In fact, two organizers of Philadelphia’s Earth Day celebration, Edward W. Furia and Austan S. Librach, wrote to TIME after the magazine’s article on the case ran, explaining that in fact — no matter what else Einhorn may have done or said — he wasn’t the founder of Earth Day, and there was no meaningful link between Earth Day and this convicted murderer.

They also explained what was really happening in that photo: “He was not even a member of the committee of 33 men and women who did [organize the event]. The photo you ran was taken during a one-hour period when Einhorn literally occupied the podium, refusing to get off the stage and delaying Senator Edmund Muskie’s keynote speech. It was an unsuccessful attempt — at least at that time — to seize 15 minutes of fame. Now a notorious murder, flight, trial in absentia and foreign capture are giving Einhorn the national media attention he so desperately craved.”

So why did the media consistently perpetrate for 48 years the wrong founder of Earth Day?