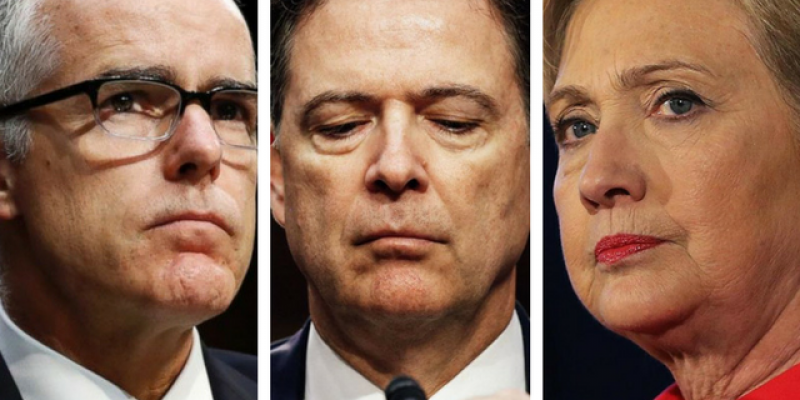 Whenever I first sat down to write this article, I was set to discuss only a single news story: that of Andrew McCabe, who was criminally referred by the inspector general of the Department of Justice. And then another story came in. Then another. And another. It’s undoubtedly been a wild week in Washington- one of criminal referrals, investigations, lawsuits, and more.

First, let’s start with McCabe’s criminal referral. We previously discussed how criminal referrals were handed down by the Inspector General at the end of March, and some people have said that was something that was a bit too soon to say. Now, we know for certain that at least one criminal referral was handed down: that of Andrew McCabe for lying to investigators regarding a leak of a story to the press. The referral was handed to the United States Attorney for the District of Columbia, Jessie K. Liu, who was appointed by Donald Trump and confirmed by the Senate in September 2017. This is a huge step, and it matches up with previous reporting that the Inspector General means business. Andrew McCabe was fired not over a political vendetta, as indicated by some; he was fired because he lied to his boss and to investigators over unethical behavior. The Inspector General made that clear in his report that was specifically crafted for McCabe, which detailed his behavior, and then made it further clear with this referral. And the buck doesn’t stop there- that report by the Inspector General was only part of what he’s found. There’s more to come, and if McCabe’s sliver is of any indication as to what the rest will be like, we’re going to feel the ground shake in Washington.

Then, you have James Comey, the supposed white knight former FBI Director who was fired by President Trump last year, kickstarting the probe that has plagued him ever since. Comey has made more enemies than friends this past week during the release of his new book, A Higher Loyalty. He has infuriated Clinton and Obama allies with his insinuation that he is loyal or ethical and with his attacks on former Attorney General Loretta Lynch. Lynch even responded with a scathing rebuttal of the attacks on her tenure as AG, stating that “If [Comey] had any concerns regarding the email investigation, classified or not, he had ample opportunities to raise them with me both privately and in meetings. He never did.” And his week didn’t stop with that controversy; the infamous Comey memos were released later this week from the DOJ to Congress, partially redacted, for our Congressmen and Senators to peruse.

However, somehow in the process, the documents became OURS to peruse as well; an unknown person leaked the memos to the public, which can now be read. Furthermore, in examining the memos, it’s apparent that while the New York Times and Washington Post certainly believe this is the end of Donald Trump (as they always do), the memos are a collective dud, providing nothing that amounts to an obstruction of justice charge or anything that is criminal at all. In fact, Trump on more than one occasion pushed Comey to open an investigation into him to prove that he had nothing to hide. That’s not the behavior of a man who is guilty. That’s the behavior of one that’s certain he’s innocent. Speaking of leaks, Comey may have leaked classified intelligence in the memos by handing them off to his friend, thus putting him in potential legal hot water. The DOJ apparently has an open investigation into the leaks by Comey, and if McCabe is any example, we could see further action by the DOJ at some point in the future.

However, the Democratic National Committee really took the cake for the most interesting story. While the others were groundbreaking, the DNC’s decision to launch a multimillion dollar lawsuit over the 2016 campaign defines the reason for tort reform while also providing a prime example of the witch hunt that the Democrats continue to go on against the President of the United States. The DNC filed a massive lawsuit in a federal Manhattan court today against a number of people and entities, including but not limited to:

The complaint alleges a number of charges, such as but not limited to:

The complaint basically alleges that the Republican Party, Donald Trump, and his campaign and associates conspired with Wikileaks and the nation of Russia to steal the presidential election of 2016 out from under Hillary Clinton by hacking into the Democratic National Committee’s servers. Even though over the past two years of being investigated for possible Russian collusion by the Federal Bureau of Investigation has turned up nothing, and a full year of a dubious investigation by Robert Mueller has turned up nothing that is related to such an accusation, the Democratic Party still insists to go down this rabbit hole, determined that Hillary Clinton must have lost due to some outside force and not because she’s terrible at campaigning and isn’t who the American people wanted. This isn’t a winning strategy for November; this is petty and the definition of a frivolous lawsuit. They should know this won’t provide them much of anything other than a means to promote their Russian narrative in the scenario that Robert Mueller shuts down his investigation. This lawsuit, if nothing else, proves that the Russia investigation is nothing but a massive witch hunt to take down the current administration.

To further the insanity of this lawsuit, not only is this lawsuit damaging to the Democrats in the eyes of the voters they must convince this November, this isn’t a good legal move. By taking this to court, the Democrats make every bit of information that Wikileaks has admissible in court, if it is real. They allow for potentially damning testimony on a variety of topics that are now available to discuss. They won’t find violations or evidence thereof for anything that they want, but it will certainly allow the Trump team to ask the questions they want: such as, where is the DNC server that the government asked to investigate? What exactly happened with the Awan brothers, and what happened to those servers that belonged to Debbie Wasserman Schultz? How about those Clinton emails that are allegedly missing? This lawsuit opens up so many doors for the Trump team, and considering that they don’t have anything to hide, they should use it to their advantage.

All of this just goes to show that the narrative that the Democrats attempted to set is collapsing. There was no collusion with Russia- just with the American people. However, there was plenty of collusion with the FBI, DOJ, and the Obama White House to commit some shady actions. Now, those hens are coming home to roost, as Andy McCabe now realizes. God knows what the future may bring, but if it’s anything like what the last week has been like, it’s going to be a wild ride before the midterms.