For this of you who missed our conversation of a couple of weeks ago discussing the Facebook controversy and how we at The Hayride have a real-life story to tell about what’s happening there, we’ll give you a brief synopsis of what’s happening.

Basically, Facebook is trying to put us out of business.

We grew our Facebook following last year from about 3,500 people to 18,000, partially through dropping several thousand dollars in Facebook ads promoting posts to our Facebook page. We did that because there is – or, more accurately, was – a business model available to New Media websites like ours wherein large-scale social media engagement would drive lots of content viral, and the site traffic from that content would then generate revenue from digital advertising networks over and above the cost of funding that social media engagement.

There are conservative websites which generated Facebook followings in the millions of people, and when posts from those sites were shared to their Facebook pages, the resulting entries into their followers’ news feeds would generate massive site traffic and, in turn, big-time revenue coming from those posts going viral. But when a few months ago Facebook changed their algorithms, that business model disappeared into the ether – and so did several of those websites.

Some of them were certainly clickbaity-type sites, which we’ve tried to stay away from being. We like to think there’s a bit more meat on our bones here. The problem is Facebook didn’t just hammer the purveyors of clickbait – they took out some more thoughtful sites as well. Rare is gone, and so is Truth Revolt.

The Hayride is not, we’re happy to say. But what Facebook has done to our site traffic this year isn’t pretty. As we said in that post two weeks ago, last year we were doing 50-75,000 page views a day here at The Hayride, and this year we’re fighting to get to 15,000 a day. We can’t hardly get anything to go viral on the site because of what Facebook is doing to us – when Matt Howerton told that amazing story a week ago about finding his long-lost brother on Ancestry, which was a post as tailor-made for viral site traffic as any we’ve ever had here, it did generate a huge number of shares and views…

We’ve never done a lot to build up our Twitter following, which sits at just under 4,000. We’ve always looked upon Twitter as the public bathroom of the internet, with the mindless trolls and vicious haters who populate that platform. We invested in Facebook instead.

And the thanks we got from Facebook was this… 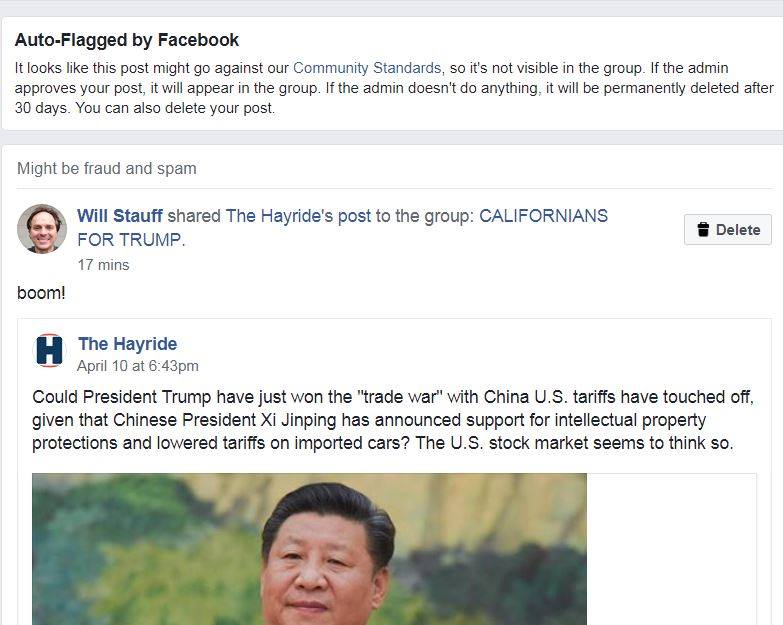 So for those of you who have followed us on Facebook and have told us you never see our stuff in your feed anymore, it looks like quite a bit of this might be the reason why. This is called “shadowbanning,” and it’s the reason lots of conservatives are screaming about Facebook. They’re doing it to us.

And Mark Zuckerberg swears up and down there’s no ideological component to his content curation. Frankly, we don’t care whether he’s lying – all we know is we spent money with him to build up a following on his platform expecting a certain return on that investment, and that return is being intentionally stolen from us.

And we’re not kidding about the word “stolen.”

But rather than make too much of a stink about it, what we’ve decided is to move on from relying on Facebook as our primary social media presence.

And that’s what that Mighty Hayride thing you see on the top nav bar is. TMH is a social media platform in its own right – it’s a product of something called Mighty Networks, which is a new platform rivalling Facebook and Twitter but with a major difference. Namely, this is our network. We own it. We control it, too – if you’re a member, everything we post will show up in your feed, unfiltered by snowflake content curators in Silicon Valley or Austin, Texas.

If you’ll link to it, you’ll see something which looks fairly similar to a Facebook page. There’s a long feed full of posts which are updated continuously, both by the Hayride’s writers and also by our more precocious members, and some burgeoning discussions as well. We have about 550 members on The Mighty Hayride so far, but a week ago we had 150. It’s growing pretty rapidly, and because it is, we’re putting more and more content there that we don’t put anywhere else.

In fact, you’re going to start to see lots of exclusive content on The Mighty Hayride you won’t even see here at The Hayride. Just in the last few days we had a number of items there that only TMH members had access to…like a rundown of the rather amusing conflict between Arthur “Silky Slim” Reed and Gary Chambers, Baton Rouge’s two most prolific race-hustlers, some analysis of the revised budget numbers coming out of the Louisiana state capitol, a post on the Climate Change crowd’s monomania and how that manifests itself even in things like hydrological studies of the lower Mississippi delta, and a couple of updates on the progress of the St. George incorporation efforts, just to name some of them.

That’s going to be increasing, because we come across lots of nuggets of information which don’t exactly fit as Hayride posts but do make sense as social media entries. Those are now going on TMH.

And thanks to a little web design work we did last week, TMH is now a sub-domain on the Hayride’s main site – so you can hang out there without even leaving the mother ship.

If you haven’t joined, you should. We’re going to be investing more and more in TMH, and adding features as we go. It’s an easy way to interact with our writers and fellow readers, and if you haven’t seen it on your phone you should, because we think the app looks gorgeous on a mobile.

As always, feel free to give us feedback. We’re just starting to develop this offering. But the more we use it, the more excited we are about what we can do with it.

Interested in more news from Louisiana? We've got you covered! See More Louisiana News
Previous Article VIDEO: So Who Are The People Opposing The Bayou Bridge Pipeline? Here’s One…
Next Article Want to go to Space? Houston Company is Creating a “Luxury Space Hotel”