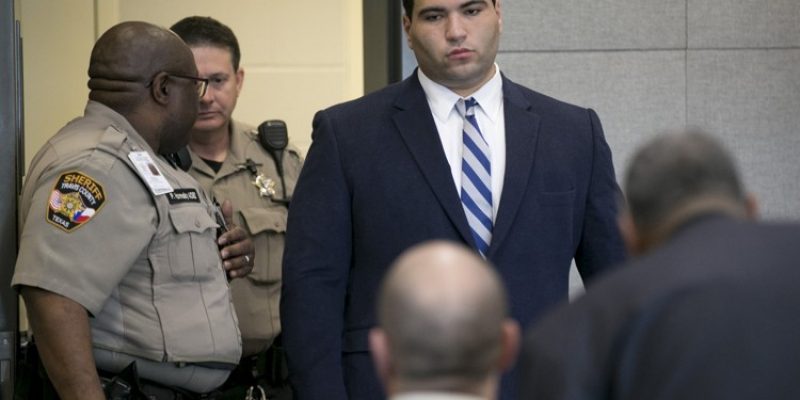 An interesting case has come out of Austin, Texas. A couple of weeks ago a young man was convicted and sentenced to 13 1/2 years in prison for shooting a member of the Austin SWAT team.

In 2016, Austin Police SWAT raided the family of then 18-year-old Tyler Harrell. During the raid, Harrell shot one of the police officers in his knee with his AK-47 rifle. The rifle was legally owned by Harrell.

Harrell was charged with attempted murder of a police officer but was convicted of assault. He claimed that he shot the officer because he thought he was a burglar.

From the Austin-American Statesman:

Uniformed Austin police officers irked the defense and some court watchers Thursday by flooding the courtroom for the sentencing of a suspected drug dealer who shot a SWAT officer in 2016.

Tyler Harrell, who fired 23 times from an AK-47-style rifle during a police raid of his family’s home, received 13½ years in prison.

The 18 SWAT team members who attended court to support injured officer James Pittman wore camouflage or dark green tactical gear, raising questions about whether their presence influenced jurors. Many of the same officers were in the courtroom last week when lawyers presented closing arguments.

The spectacle caught the attention of Harrell’s lawyer, Michael Chandler, who motioned to the officers and told the jury, “Look at this gallery. You don’t think this is a lot of political pressure for these people?”

Interim Austin Police Chief Brian Manley said in a statement that he allowed the officers, who were on duty, to go to the trial after a request from prosecutors.

“Since this trial involved a SWAT operation and many of the officers had testified during the trial, their attendance at closing arguments and sentencing was appropriate,” Manley said. “This gave them the opportunity to hear testimony over their tactics that day as well as supporting a fellow officer who was seriously injured in this incident.”

The issue of the uniformed officers will be decided on appeal. However, does Harrell’s claim of self-defense hold water?

Here’s a summary of the arguments of both sides.

Defense attorney Skip Davis shouted and flailed his arms at the jury during opening statements in an attempted murder trial on Tuesday morning.

Davis was trying to demonstrate the confusion that his client might have felt on the morning he shot and wounded an Austin police officer who burst into his home during a drug raid in 2016.

“Austin Police Department! Stop moving! Come out with your hands up!” Davis shouted as he made loud booming noises to simulate the series of nonlethal stun grenades that were detonated by SWAT officers during the raid.

Davis said that Tyler Harrell, 18 years old at the time, acted in self-defense and did not know he was shooting at the police.

Prosecuting attorney Chari Kelly said that Harrell knew it was the police and fired anyway. Officers clearly announced their presence outside the home over a loudspeaker, she said, and Harrell saw the officer before firing about 23 shots at him.

In comparison, Leighton Radtke, the officer who coordinated the raid, only fired about three shots at Harrell, according to Kelly.

Several gun rights supporters saw this as a threat to the right to self-defense. Tho Bishop of the Mises Institute wrote:

While it’s a shame that someone was hurt during the police raid, [Harrell] is the clear victim in this situation. After all, what is a reasonable person supposed to do when armed men knock down your [front] door without any sort of announcement? Anyone who favors gun rights must concede that the natural reaction is to defend yourself and everyone else in the home.

Did the jury get this decision right? We won’t comment on that, we weren’t in the jury room. Even if the verdict was just under the letter of the law, there is something wrong with no-knock raids.

In other words, police knew that at least one person in the house had a gun, and they reacted to this information by purposely creating a frightening, confusing situation in the middle of the night—exactly the sort of situation in which the weapon’s owner would be apt to reach for it in self-defense. They did so supposedly to guard against “potential dangers to officers” and thereby magnified those dangers, in this case sending Officer Jason Pittman to the hospital. He is lucky he was not killed, and so are Harrell and his parents.

But don’t worry: All the risk to life and limb was totally worth it. Police found 34 grams (a little more than an ounce) of marijuana in the house. As KVUE notes, it was “just enough to charge someone with a misdemeanor.”

No-knock raids, in this case, caused an officer to get hurt. As Sullum wrote, we are lucky that Officer Pittman was the only casualty in this raid. Cops conduct about 20,000 of them annually across the country.

No-knock raids need to be restricted to only the most extreme cases. They are a threat to the Second Amendment and often put officers’ and homeowners’ lives at risk.

Harrell has the right to an appeal of this conviction and the appeals court should take a good, hard look at this case.