We’ll have a full review of John Bel Edwards’ Bizarro World address to the conclave of local pols and state workers on the ULL campus in Lafayette a little later today, but in the meantime we have something juicy to pass along with respect to Edwards’ stagemate Billy Nungesser, who introduced him today.

On Friday we had a post about Nungesser agreeing to share the podium with Edwards, and how it was a rather unfortunate mistake for him to do so, particularly given a recent pattern of questionable decisions he’s made for someone who ran as a conservative. Much has happened since; over the weekend there was quite a bit of feather-ruffling among the insiders within the Republican Party, and particularly there were calls made suggesting that Nungesser needed to beg off of that speaking engagement in Lafayette since it was destined to be a bashing of Republican legislators and a demand for tax increases.

Nungesser rebuffed those entreaties, rather roughly, and in doing so has poisoned some key relationships which could well make his prospects for re-election considerably dimmer.

And in particular, State Rep. Blake Miguez (R-New Iberia), one of the rising stars in the Louisiana legislature whose name has been tossed around as a potential successor to House Speaker Taylor Barras (among other things), was furious over Nungesser’s insistence on joining Edwards at the Lafayette tax hike show.

There is some history here, which is that Miguez is a member of the State Bond Commission and is also a very staunch 2nd Amendment advocate. He’s a champion sharpshooter who, before he got into politics, appeared on the History Channel show Top Shot. So last month when the Bond Commission entertained a motion by Attorney General Jeff Landry that would ban a couple of Wall Street banks who publicly declared they’d be discriminating against sellers and manufacturers of guns from participating in financing Louisiana’s public debt, Miguez was an advocate of that plan. Essentially Nungesser voted against it (he voted for a substitute motion making the resolution worthless), and the motion failed in a close vote.

And then Nungesser hired Democrat state representative Gene Reynolds to run the state parks, which had a number of Republican legislators up in arms – one asked us whether there is a shortage of Democrats in state government he wasn’t aware of.

It was too much for Miguez, who appeared yesterday on the Moon Griffon radio show to express his frustrations with Nungesser. That set the two on a collision course for last night’s annual Elephant Stomp gala put on by the House Republican delegation, and there was a verbal confrontation between Miguez and Nungesser in the receiving line involving heated remarks and foul language principally by the Lt. Governor.

Miguez was clearly still hot about the confrontation, so as Nungesser was embracing Edwards on the stage in Lafayette he tweeted this…

Did @BillyNungesser just endorsed the Governor tax and spend policies on the hardworking tax payers of Louisiana? What a disappointment to the Republican Party of Louisiana! @lagop #lalege https://t.co/QbDpouOnPZ

And then Nungesser, amazingly, responded with this (we had to take a screenshot because clearly this tweet is going to be deleted)… 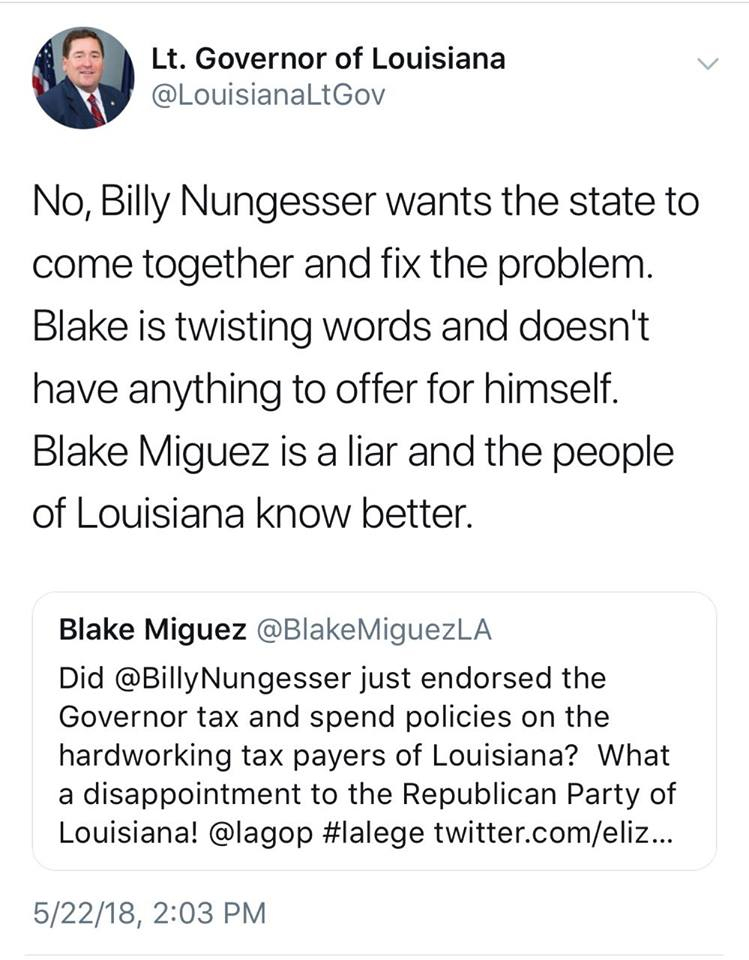 If you’re a statewide elected official you really can’t go around calling legislators of your own party liars. That’s the kind of unhinged behavior which will trash your political career in a hurry.

We’ll have to watch things happen over the next few days to see if Nungesser is in the middle of a true implosion. It’s starting to look like he is.