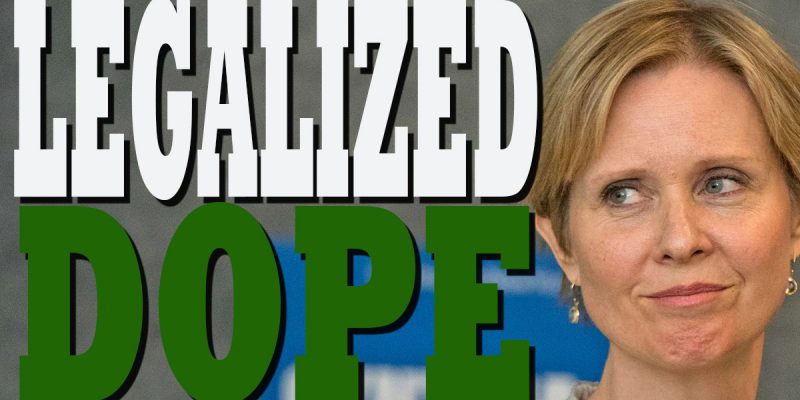 You know the actress Cynthia Nixon, right? She was the bitchy lesbian in Sex In The City, and if you saw Warm Springs she was Eleanor Roosevelt – though you might not have noticed.

Well, you’d probably notice her now. She’s running for governor of New York against Andrew Cuomo in the Democrat primary, in what has to be the most depressingly idiotic race in America today. We don’t even know who the Republican nominee in that race will be, but whoever he is he’s got to at least have a shot at winning, no matter how Democrat-heavy the state is (Maryland and Massachusetts have Republican governors, after all).

Especially if Nixon knocks off Cuomo in the primary. This being Nixon’s campaign in a nutshell – and we’d like to emphasize “nut” here…

Cynthia Nixon took heat Monday from black leaders over her comments that creating a legalized pot industry in New York could serve as a form of reparations in black communities.

Nixon on Saturday told Forbes magazine “now that cannabis is exploding as an industry, we have to make sure that those communities that have been harmed and devastated by marijuana arrests get the first shot at this industry.”

“We (must) prioritize them in terms of licenses. It’s a form of reparations.”

The comments came under fire from some community leaders.

“I’m for legalizing marijuana and I like Cynthia Nixon but putting pot shops in our communities is not reparations,” the Rev. Al Sharpton tweeted. “Health care, education !!”

“Reparations is a repayment for the free labor that built this country,” said Wright, a former state Democratic party chairman under Gov. Cuomo.

“Ms. Nixon should relegate her comments to legalization, pro or con,” he said. “I believe social equity should be a part of licenses to sell marijuana, if and when legalization does occur. However, it is insulting to my soul, that the free labor that my ancestors gave to this country would be equated with the selling of marijuana.”

The legalization issue is one of those seemingly inevitable things destined to come to pass, particularly in deep blue states like New York. That isn’t really the issue here. The issue is a totally unqualified actress with less than a dime bag’s worth of a clue attempting to make herself appear woke by tying legalized dope to slavery reparations – as if every single community activist working the black neighborhoods won’t tell you drugs are at the top of the list of social pathologies needing to be scrubbed out.

The entertaining piece about this is that while Al Sharpton might blow his top over Nixon’s comments, the guilty white leftists in New York who outnumber the state’s black voters probably don’t disagree with her.

We’re reminded of a certain scene from Caddyshack.

It’ll be entertaining to see whether she walks the comment back. We’re not sure she will.