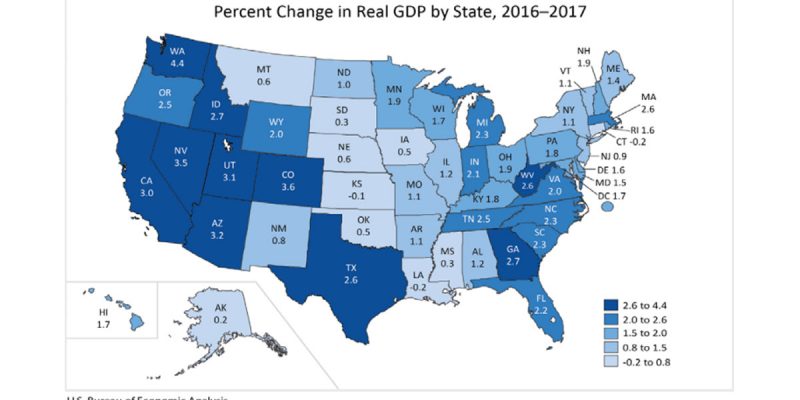 Perhaps FINALLY, at long last, the general public in Louisiana will begin to recognize what an abject disaster John Bel Edwards has been as its governor.

Now that the results are coming in, after all.

Louisiana posted the worst economic performance among the 50 states in 2017, becoming one of only three states where the economy shrank.

The state’s economy contracted by 0.2 percent, getting smaller for the second straight year. Louisiana was hammered by poor economic results in the nondurable goods manufacturing sector, which includes key oil refining and chemical industries.

What’s really frightening about the state’s economy contracting is that GDP includes government spending in its measure of the economy.

And now, the explanations…

Greg Albrecht, chief economist at the Louisiana Legislative Fiscal Office, tells The Advocate that the figures suggest Louisiana is still feeling the lingering effects of an oil price-driven recession that has slowed growth since 2010. After bottoming out in 2013, the state’s economy had begun to grow again in 2013 and 2014, but growth stalled out again.

“We’re not completely undiversified, but we don’t have the kind of diversification that if your oil and gas sector goes weak you can recover quickly,” Albrecht said.

Well, the oil and gas sector nationally isn’t weak. Nationally oil and gas has been a main driver of the economy. Maybe one reasons it’s weak here because the governor has dispatched an army of plaintiff lawyers attempting to sue oil and gas for billions of dollars. That’s certainly what oil and gas people in Louisiana, the ones who are left, will tell you.

“We’re not where companies are going to put their dollars back when (oil) prices start going back up, at least initially,” Richardson said.

West Texas Intermediate Crude closed Friday at $69.72. That’s the highest number it’s been since November 26, 2014. Oil prices have started going back up. But there is no particular reason to see a massive comeback in oil and gas in Louisiana, other than a little bit of percolating interest in the Austin Chalk in the central part of the state.

The last three months of 2017 showed stronger growth for Louisiana, with its economy expanding at a 2.2 percent annual rate. That still trailed the U.S. average of 2.7 percent. Richardson said it was too soon to tell if that means the state has turned the corner.

You think 2.2 percent is a good number, do you? Here’s what our neighbors did in the fourth quarter…

Louisiana’s economy performed worst in the South in the fourth quarter, when the state supposedly was turning the corner. We’re the Sick Man of Dixie.

And again, this is an economy which is the worst in the country, shrinking by 0.2 percent, despite a massive infusion of government spending since John Bel Edwards was elected. In 2017 that infusion was actually trimmed back by 0.1 percent – when Edwards blew up the state’s bottom line with $2 billion in tax increases in 2016, Louisiana’s economy actually shrank by 0.4 percent.

Diversifying Louisiana’s economy? Oil and gas, defined as the mining sector by the Bureau of Economic Analysis, actually grew by 0.3 percent in 2017. But nondurable goods manufacturing was off almost a whole percent, at -0.9. Transportation and warehousing lost 0.16 percent, which isn’t a surprise given a sizable inventory tax increase. Agriculture lost .07 percent. Information lost 0.1 percent. Looks like a diverse failure.

Sure, blame this on Bobby Jindal if you want. That’s what Edwards will do, while pretending things are getting better because some call center is opening up in New Orleans.

But at the end of the day, this governor lied his way into office by denying he would be raising taxes and distracting voters with ads about hookers, and as soon as he was inaugurated he began governing precisely as the state’s furthest-left member of its legislature would be expected to govern – raising taxes, growing government and treating the state’s productive class as prey.

Treat people like prey long enough, which isn’t very long, and they will begin acting like prey. Namely, they’ll flee for their lives. That’s why Louisiana had 27,000 people pick up and leave last year, with a pretty good expectation that population loss will only get worse in the next measurement.

In every competitive metric Louisiana is doing poorly and getting worse. It’s an across-the-board rout.

And behind the scenes it’s worse. You’re going to start hearing some stories about corruption at high levels within state government. You’re going to hear about some ugly developments with respect to Edwards’ signature legislative achievement, criminal justice reform – and the folks on the Right who worked with him to produce that achievement are probably going to have to turn on him for his implementation of it. You’re going to hear more bad economic news – Smoothie King isn’t the only local company looking to move its headquarters elsewhere.

Meanwhile Louisiana is mired in yet ANOTHER budget crisis, because Edwards insists on spending more money than the state has, and in a week or two the legislature will be in a special session at his demand for tax increases, with a stalemate to come – he can’t command the loyalty of the Legislative Black Caucus, which has balked at supporting sales taxes, and thus has to join them in calling for income taxes which are a dead letter with the legislature’s Republican majority. So how is he going to get the tax increases he wants to close a $500 million budget gap? Your guess is as good as ours, but nobody at the Capitol has a lot of faith in his leadership.

Why have faith in something which manifestly does not exist?

Edwards opened the legislative session calling for occupational licensing reform and specifically named florists as an occupation needing delicensing. Well, the bill to do that died 6-1 in a Senate committee last week, which should give you an indication (1) of Edwards’ strength, and (2) of how effective his stated word is in creating action. Louisiana, the worst-performing state in the union, is also the only one protecting its public from the ravages of unlicensed floral arrangements. The current governor, despite things he might spew forth in speeches, can’t or won’t even fix that obvious blemish on our economic record.

He’s an unmitigated disaster, as anyone who knew anything about him foresaw him to be.

So, Louisiana, what are you going to do about this? You’re the worst-run state in America and your jobs and capital and people are leaving. Your house is on fire and the guy you elected to take care of the place is running from room to room pouring kerosene on the floor.

Are you happy? Are you ready to fix things? Or should we all pack up and leave?